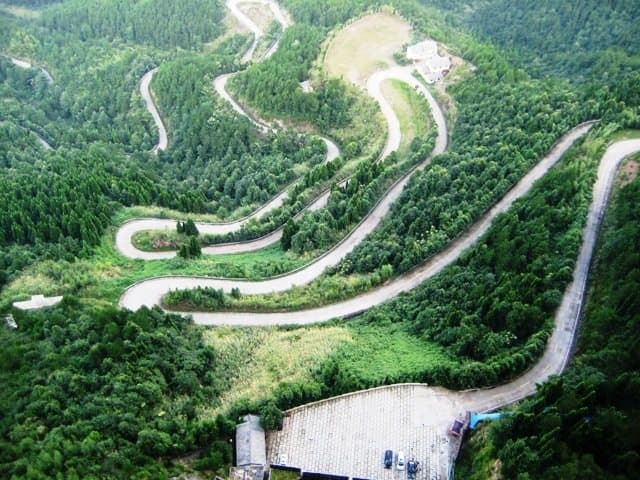 The view from the top down at the winding road to the base of the peak in Zhejiang Province.

The Strange Case of Jingxing Rock 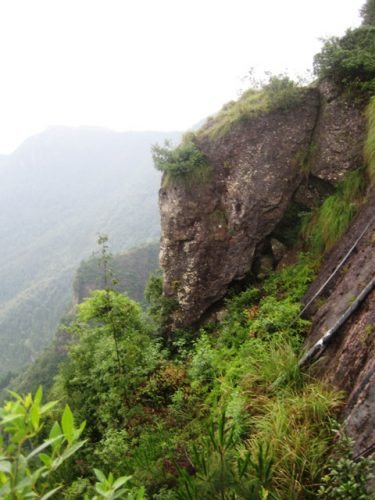 Elephant head peak, named for its resemblance to the animal, in China.

For a westerner in rural China, the surreal is never far away.  It might reveal itself down a darkened alleyway of strange shops, or it may appear on a cài d?n (menu) full of exotic dishes.

I was in Zhejiang Province, and a recent day trip was to a unique locale called Jingxing Rock.  This place was heralded by my hosts as a popular tourist attraction but after experiencing what it has to offer,

it struck me more as a setting for a Fellini movie.

In fact, it is often used by the Chinese film industry.  Its natural beauty is quite evident and its undeveloped countryside with rolling hills and serpentine roads is picturesque and deservedly noteworthy.  However, the uniqueness of which I speak lies not in its natural beauty, but rather in the lives of its local people.

A Kind of Amusement Park

Jingxing Rock, which is a kind of amusement park, is staffed by workers who live both in a nearby village and in the park itself.  They are poor, common folk, eking out a modest living in a place that is, even by China’s standards, off the beaten path and under-loved.

Some are tour guides: They greet groups that arrive at Jingxing then escort them up a mountainside trail of stone steps to an elevator, which leads to the top of the rock.  The guides dutifully inform tourists of the history of the place, which dates to the late Ming Dynasty.

The rock formations that abound have names, depending on what the formations might resemble?hence there is Elephant Head Peak, and Mandarin Duck Playing Water, and Eagle Expanding its Wings.

Once we reached the top via the slow-moving elevator, our group took a short stroll along a path with panoramic views until we reached the requisite souvenir shop, where trinkets, jade jewelry, and refreshments are sold. 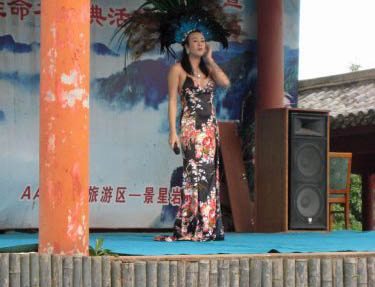 A cross-dressing performer singing for the crowd of Chinese visitors at Jingling Rock.

Here begins the surreal: There is in front of us a large, somewhat dilapidated stage, nondescript enough until performers enter from up-stage to sing for us.  They are transvestites.

There were only a half a dozen in the audience, nonetheless, three tattooed performers, clad in layers of colorful, sheer fabric, sang lilting tunes in both Mandarin and in their local dialect.

I observed that while one of them seemed “merely” to be a cross-dresser, another revealed evidence of hormonal treatment?Not a transvestite, but transsexual.

One of my hosts leaned in and asked if I was scandalized by the performers.  I smiled, not sharing with her that I worked in a cabaret in New York years ago and the show before me now was tame in comparison.

The Chinese in my group watched with alternating annoyance and fascination.  There was a poetic sadness about the spectacle as I listened to the tinny music that emanated from hanging speakers, and accompanied the singers.

When the show was over, several in our group tipped the performers, and they disappeared backstage.

Our guide then led us further around the mountain path, to an open field where local vendors sold recently harvested xi gau (watermelon) and my friends and I amused ourselves practicing archery nearby with bows and quivers of arrows provided by other employees.

When it was time to leave, that is, descend the mountain, there was another surprise.  We were taken to a low, smooth, concrete chute that clung to and dipped along the mountainside.  No elevator for us, we would now slide down the mountain back to the parking lot where our cars waited.

Each of us donned a kind of coarse apron which wrapped around our midsection, and each put on a pair of cotton gloves to grasp the edge of the chute.  Finally, when we sat down in place to begin our sliding descent, another employee placed a crushed plastic bottle under our seat.’

Sliding Down the Concrete

That worker, who was equipped as we were, led the way, and we all slide down the concrete.  The descent was not overly steep, and the presence of the employee, who set the pace, guaranteed we would not slide too quickly.

Past trees and rocks and vistas we slide, some of us laughing, some a bit afraid, all of us acknowledging the weirdness of the experience.  Then, minutes later, we “landed” in the parking lot.

There we were greeted by more vendors selling xi gau and bottled water.  At a small table, we could purchase pictures of our descent, courtesy of a technician seated at a computer, who had access to several digital cameras positioned along the chute.

That is Jingxing Rock.  Fellini would have loved it. 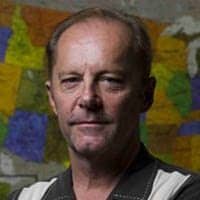 Matt Cutugno was on his way to work on the 37th floor of the South Tower on the morning of September 11, 2001 when he witness the aerial attacks on the Twin Towers by terrorists. He has since moved to the desert.