“Being lost is not about losing one’s way, but rather the utter pleasure of being nowhere specific. There is something about not being in somewhere that is intensely freeing.”

loses itself along the back roads of the Midwest, capturing the globally revered natural wonders within national parks, and the equally stunning hidden gems treasured by locals.

I travel 50,000 miles or so every year along the back roads of the United States. Cities and freeways hold little interest for me. I call this getting lost on gray roads.

In the excerpt below, the author discusses his personal philosophy behind his travel, how the beauty of nature propels his adventure, and how getting lost inspires him to capture and share his experiences.

Excerpt from the Book

When I talk about getting lost on gray roads, most people smile and move their head politely in a congratulatory sort of nod. In a few moments, the smile will fade a little, and their brows will furrow just a bit, and inevitably the question: “what exactly does that mean”?

Being lost is not about losing one’s way, but rather the utter pleasure of being nowhere specific. There is something about not being in somewhere that is intensely freeing.

On the maps you can get at your local AAA office, gray is the color of the smaller, two-lane winding roads. You know, the ones for which you get a map precisely because you want to avoid them. Gray roads are definitely not the fastest route from one point to the other: they are the exact opposite.

They ramble across the landscape, meandering like they have only a vague idea where they are going, hunting for clues of cardinality along the way in small towns and railroad crossings.

My choice of gray roads is really my love of that adventure and the freedom that comes with it. The freedom to try new things, freedom to experience life through the eyes of those you meet, the freedom of time, of choosing to slow down so travel becomes multi-directional rather than a straight arrow (My trusty Ford pickup is named Bob for exactly this reason: the name is the same whether it’s coming or going).

It is the custom on back roads and in the countryside to wave at passing vehicles and to return the gesture. I call it the four finger salute. You just lift your fingers off the top of the steering wheel, nod your head slightly and you’ve made contact with a passing car or guy on a porch or woman on a lawnmower. It’s nice. It’s friendly. It doesn’t work on the Los Angeles freeways.

A similar and related phenomenon is that passing cars sometimes stop to ask if I need help when I’m pulled off the road to take a photo. It is easy to understand as often there is no real shoulder and my truck is knee deep in weeds or cantered into a ditch at a 45 degree angle. I sort of look like I might be in trouble.

When I point out the scene I’m photographing their concern sometimes changes to a kind of awe as they see property and farms they have passed all of their lives in a new way. They say things like “Wow, I never noticed how pretty that is” or “It is a beautiful day isn’t it!” or “Where did all those freaking clouds come from?” For me, that is like winning a little lottery. The art of photography is all about seeing things differently and sharing that is always terrific.

Being lost is in part the art of finding beauty without a dotted line or a series of trail markers pointing the way. It’s a love of not knowing what’s around the next bend: A quintessential hay bale, a speeding train or a chicken stand directly from Tyson’s farms. Being lost is the ultimate treasure hunt, unbounded by federal protection acts and Rangers, unaided by the infinite technological wonders of GPS and Google, and spared from legions of sightseers and tourists. It’s a love of being alone and yet and desire to share what I’ve discovered.

As I crisscross the back roads of what some people call “the flyover states”, I find little gems and prizes everywhere.   If you are looking for your favorite spot or road, I may not have found it yet.   I’ll keep looking and you are, of course, welcome to contact me and make suggestions and so on.   I’d love to hear from you.   Many of my favorite places were found when I asked someone at a gas station or restaurant “What’s good to see around here?”

Many of my photographs reveal another kind of freedom: panoramic photographs. As a photographer, I was trained in the art of seeing things through the confined dimensions of a 35mm piece of film, approximately 3:2, slightly wider than tall. As all photographers have done, I have worked within these boundaries using wide angle lenses to capture more of the scene than would otherwise be possible, but the resulting distortion of distance and perspective never felt quite right.

I found myself secretly jealous of painters, who could select any size canvas on which to create art. When I found panoramic photography a few years ago, I realized I had discovered my unrestrained canvas. Panorama photographs are carefully crafted from multiple photographs that are combined together to form one large image.

With panoramas, I can photograph without traditional framing limitations. This is immensely satisfying for me, as I feel panoramas are best able to convey what you would have seen had you been standing there beside me when I took the picture.

So, I guess you could say these books are really more of a love story. The love of freedom, love of nature, love of travel, love of adventure. Not the Karoacian sort of adventure with human struggle and triumph, but the adventure of a profound never-ending road trip that always ends in “You wouldn’t believe what I saw. Let me show you”. 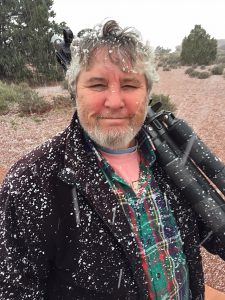 David Skernik was born a New Year’s baby in 1956, in the heartland of the United States in Cleveland Ohio.

David started taking pictures of the only interesting things in his hometown: people and landscapes. He eventually narrowed his work to landscapes because nature didn’t ask so many questions.

David continued to refine his artistic approach, and on a dare moved to Los Angeles in 1980 where he met, tutored, and eventually married his star photography student Ria in 1992.

David’s current photography reflects his formative experience making that long drive from Ohio to California. On that trip, David developed an appreciation of the sometimes overlooked magnificence that is American culture, nature, and landscapes. Since then David travels exclusively by his truck “AlsoBob” on the “gray roads” (back roads on the AAA maps are all marked by gray lines), and never the same road twice.

Recent shows include the L.A. Photo Show and Photo L.A. 2015 and 2016 and Photo Independent 2015. His book  Lost on Gray Roads was released along with a showing at the ArtLA gallery in Bergamot Station in Los Angeles in 2013.  David resides in Woodland Hills, California with his wife Ria and dog Chewy. He spends as much time as possible teaching and traveling the gray roads of America.