Wisconsin’s Most Famous Architect Has His Own Trail

It’s one thing to see the innovative architecture of Frank Lloyd Wright, but it’s another to hear the back story of a man considered to be America’s greatest architect.

The newly opened Frank Lloyd Wright Trail stretches for 200 miles across nine counties in southern Wisconsin, the birthplace of the architect and designer.

Exploring the Trail is an amazing and educational experience into the life and work of this creative, arrogant rascal of a man.

There are nine stops on the Trail open to the public, with some offering guided tours and some being self-guided.  Times vary, so best to check in advance.

Wright’s personal life was both colorful and contentious.  His first marriage to Catherine Tobin ended due to an affair with Mamah Borthwick.  Mamah and her two children, along with four others, were murdered at his beloved Taliesin home by a servant gone mad, who also started the place on fire. 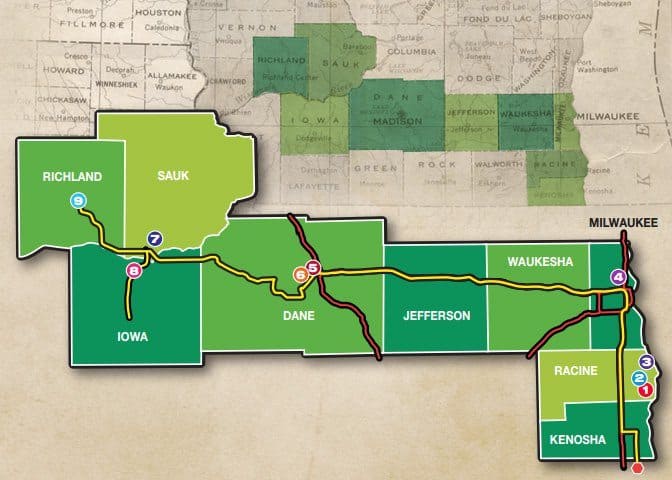 Wright later had a brief marriage to Miriam Noel, and finally settled with his third wife, dancer and writer “Olgivanna”.

Out of these relationships, he had eight children. He had an endearing passion for Asian Art, grand pianos and luxury cars, which may have contributed to his occasional financial woes.

Wright started his career as a draftsman for a firm in Chicago in 1887 and continued to work until his death in 1959 at age 91. Wright’s philosophy was one of “organic architecture”, whereby his creations became one with the landscape.

It’s clearly evident on the Trail as you see how splendidly the buildings marry into the surroundings.   Natural materials, such as rocks and stone, take on a dominant role as does his favorite color, Cherokee red.  In his lifetime, Frank designed 1,171 projects, of which 511 were built.

His creative vision extended beyond structures to include furniture, lighting, clothing, tableware and textiles, all evident as you tour the interiors of the buildings on the Trail.

If one of his projects was not located with a stunning exterior view, then Wright designed stained glass windows to serve as a filter.  In all of his work, he focused on respecting the needs of the people who would occupy the spaces he designed.

One of the highlights of the Trail where guided tours are offered is the SC Johnson headquarters in Racine.

Johnson products started with the iconic Johnson Paste Wax and today include familiar household names such as Glade, Pledge, Raid and Windex.

The third generation head of the company, H.F. Johnson, sought out Wright to design the headquarters, for this reason.   “Anybody can build a typical building.

“I wanted to build the best office building in the world, and the only way to do that was to get the greatest architect in the world.”

Very impressive is the administrative building, a half-acre of open space with soaring dendriform columns that resemble lily pads (18.5 feet in diameter at the top, with a base of 9 inches).

Forty-three miles of Pyrex glass tubing provides a soft buttery light on the interior.  All the furniture was designed by Wright, including the three-legged desk chair which proved to be very tippy.

Wright also designed the SC Johnson Research Tower, one of the tallest structures (153 ft.) ever built on the cantilever principle.   The tower features more than 7,000 Pyrex glass tubes to reduce glare and refract light in the tower, creating a working environment that was integral to the well-being of the employees.

Wright later designed Wingspread, a home for H.F. Johnson.  It was no secret that Wright was known to be over budget with many of his projects which frequently had leaky roofs.

During a heavy rainstorm, H.F. Johnson called Wright to complain that his roof was leaking and droplets were falling on his head at a dinner gathering.

Wright quibbled back “well then, move your chair.”  While occupied by the Johnson family for many years, today Wingspread is under the care of the Johnson Foundation.

It serves as a gathering place for movers and shakers intent on making positive changes in our world.

The most impressive stop on the Trail is the Taliesin estate in Spring Green, a short drive from Madison.  This was the Wright’s home, studio, and school and sits on 800 acres of verdant rolling hills and farmland. Taliesin, a Welsh word meaning “shining brow”, was damaged twice by fires, only to have Wright rebuild as needed.  Both fires damaged the living area but stopped short of Wright’s studio, to which Wright reacted by saying God was judging his character, not his work.

To be in Wright’s personal space on a guided tour is to really get a sense of who the man was. Being surrounded by his exquisite art collection, his sizable fireplaces, and his well-crafted furniture is both humbling and remarkable.

From inside his Taliesin home looking out, it becomes clear how strongly he felt about blending his projects into the landscape.

It was at Taliesin that Frank saw his vision of a creating a space for those wishing to study architecture come to life.  Along with Oligvanna, Wright created the Taliesin Fellowship in 1932.

Those fortunate to study at Taliesin not only found themselves working alongside Wright in the studio, but were required to work out on the farm or in the kitchen.

Wright felt this was the best way for his students to understand the nature of “organic architecture”.   He also had his students involved in painting, sculpture, music, drama, and dance as “divisions of architecture.”

Today, Hillside Studio and Theater, part of the Taliesin complex, is the home of the Frank Lloyd Wright School of Architecture.  Students can be seen working here from mid-May through mid-October.

Taliesin Preservation has done a superb job of managing the grounds of the Taliesin Estate not only with guided tours, but special events like a farm dinner series, a cycling event, concerts, and winter festivals.   Architectural camps (Grades 3-12) are offered as well.

Monona Terrace and Beyond

Back in Madison, the Monona Terrace, whose exterior was designed by Wright, opened in 1997 as a beautiful conference/event center on the lakeshore of Lake Monona.

Wright first envisioned a civic facility for Madison back in 1938 and would go through several renditions where he estimated the cost of construction to be around $17 million.  It took $67.1 million to complete Monona Terrace.

The Trail also touches on a few of Wright’s projects beyond homes, including the Wyoming Valley School Cultural Arts Center, and the First Unitarian Society, of which Frank was a member.

While the Trail provides a convenient way to see a handful of Wright’s creations, his scope of work extends out across 36 states, many of these private homes.

The last 16 years of Frank’s life were spent designing the Guggenheim Museum in New York, which opened six months after his death in 1959.

It’s not possible to explore all the buildings on Wisconsin’s Frank Lloyd Wright Trail in a single day.

Two to three days is a reasonable time to hit all the stops and take in the guided tours. Both the towns of Racine and the Madison are ideal locations for lodging and dining.

I will confess to knowing very little about Frank Lloyd Wright prior to exploring the Trail.

After seeing first hand some of Wright’s projects and being present in rooms where he lived,  I’m reminded of how beautifully educational travel is…a way to never stop learning about this world.

Donnie Sexton has moved on from a very long stint as staff photographer and media relations manager for the Montana Office of Tourism. Her path is now focused on feeding her addiction to travel and sharing her journeys in both words and photography. www.donniesexton.com