Togo: Visiting Fetish Healers at the Market in Lome 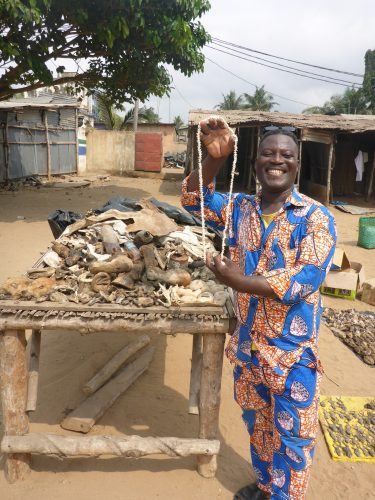 Suru the guide and overseer of the fetish market in Togo. Edward Placidi photos.

My Dance Macabre Among the Fetish Healers of Togo 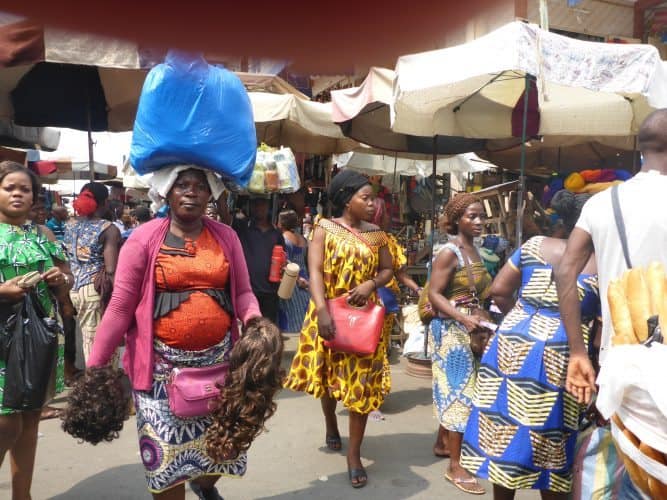 Women do the hard work in the fetish market in Togo, West Africa. mark

It was a ghoulish and gruesome scene in the doctor’s office.

Hundreds of carcasses splayed on the ground. Row after row of heads and other body parts arranged on tables. Spines, legs, arms and other skeletal components in piles. A foul odor, the scent of death, in the air.

A grisly tableau, not for the squeamish, but it was not what it seems. This is actually a place of healing and well-being, a doctor’s office of sorts, African style. It is the Marché des Fétiches d’Akodésséwa of Lome, the capital city of tiny Togo.

Fetishism has long been practiced in villages, but with the mass migration from the bush to cities over recent decades, it has followed its patients to urban settings – but none on the scale and scope of the Marché des Fétiches, the market that is the urban hub of the fetish practitioners of West Africa. 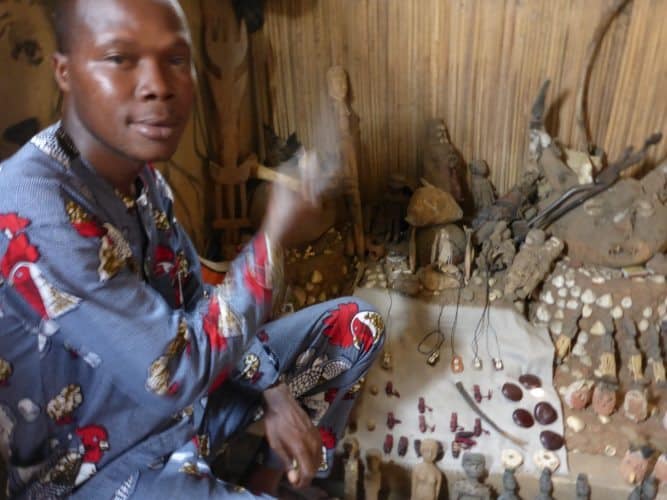 Like Western doctors, villagers traditionally went to fetish practitioners for a consultation, and not just for health issues but any personal life issues too.

The fetish men are believed to be healers who create wellness, and happiness too.  They prepare a specific fetish to alleviate each individual illness, solve a problem or fulfill a need.

Empowered by Skills and Magic

The fetishes are empowered by both the skills and magic of the fetishist and the mixture of herbs and ground animal parts that are believed to have natural properties to counteract specific afflictions.

“Fetishism is natural African medicine, a white magic, the opposite of black magic which is evil,” explained Suru, my guide and the overseer of the market. 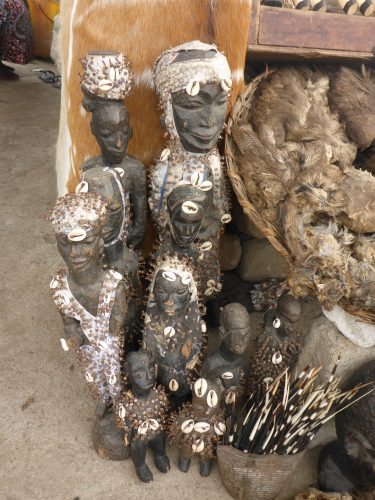 Fetish items of all sorts can be found in the market in Lome, Togo.

While Lome’s fetish market remains a serious option for the locals who still employ the time-honored services of the fetishists – though more and more in conjunction with Western medicine, according to Suru – it has been somewhat co-opted as a tourist trap:  foreigners are not allowed to visit on their own;  they must be taken through the market by Suru, which costs about $5 for his guide services, and if you want to take photos it’s an additional $3.

As it turned out, it was worth every cent: Suru’s excellent, comprehensive explanations brought fetishism into sharp focus, and it also included a consultation with a fetish doctor.

Arriving at the Marché des Fétiches, I was greeted by the desiccated heads of hundreds of dead animals – of every size and type, from baboons, cobras, monkeys and blowfish to bush dogs, boa constrictors, antelopes, and goats –facing me down with empty eye sockets.  Their dried, sun-bleached bones were piled on the beds of old, splintered, wooden carts.

A once-graceful owl, its down still fluffy, was tied to a stick, flightless in death. Crocodile skulls with rows of sharp teeth were displayed side-by-side with mamba spines and 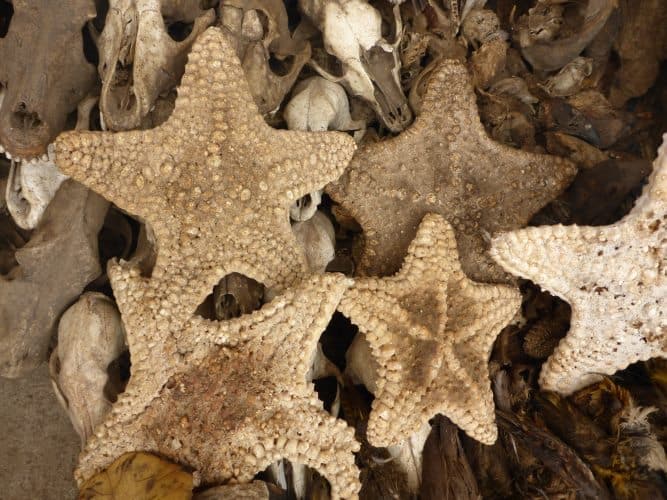 Dried starfish at the market.

Their dried, sun-bleached bones were piled on the beds of old, splintered, wooden carts. A once-graceful owl, its down still fluffy, was tied to a stick, flightless in death. Crocodile skulls with rows of sharp teeth were displayed side-by-side with mamba spines and horsetails.

Every item in the market is there for a concrete reason. In the belief system of fetishism, explained Suru, “Every animal has specific healing attributes, and the most powerful part of fetishism’s white magic is the dried animal parts. Their magic is tapped by the fetish doctor’s knowledge, skills, and healing power.”

There are many kinds of poisonous snakes in the market and each is used to create a protective vaccine from their bite – for those who live in an area where that type of snake is a threat.  Cobra and viper spines are for back problems. Cow heads are the answer for headaches or migraines. 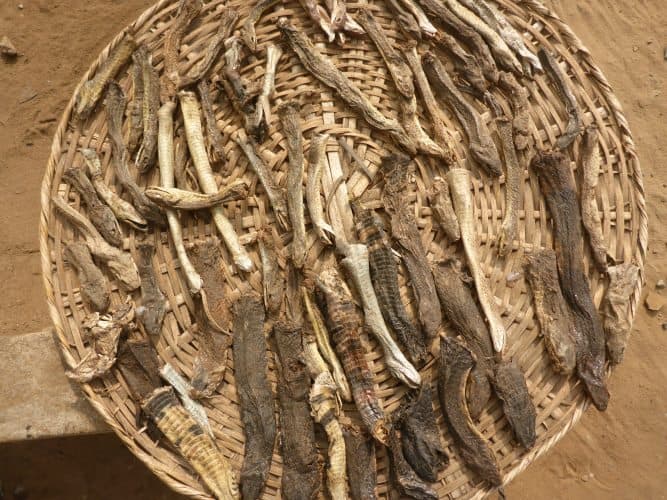 Dried up snakes in the market.

Porcupine quills are employed to alleviate pain. Starfish are for good luck, and chameleons to help improve memory. Ground-up bats and specific herbs with antibiotic properties are used to cure viruses.

“The fetish doctor will help you with whatever you need in your life,” enthused Suru.  For marital good luck and fertility, he will prepare a set of male and female dolls and bless them. If you are having trouble sleeping, he will create a talisman to put under your pillow or one to place in your stand or shop to help bring in more customers and increase your business.

In some cases, the patient is given a powder and told to mix it with water and apply it to the skin, or even bathe in it.  In other cases, you are given a fetish – usually, a small object made of a natural material such as mud or wood, typically containing a blend of ground plants and animal parts – that you carry with you.

Performing a specific ritual may be required to unleash the powers of the fetish, such as the love fetish for men:  The man must douse himself with a favorite cologne, say his name seven times and her name seven times, and carry a pouch prepared by the fetish doctor stuffed with a curated blend of herbs and animal parts. When he sees his love interest, he must greet her by touching her with the hand he used to apply the cologne, and – presto – she will fall in love with him.

All of these dead creatures with horrific frozen facial expressions can be disconcerting, however, I was told they were not intentionally killed for the fetish market but died of natural causes.  “Local people bring them to us when they are already dead,” claimed Suru. “They have died naturally because to hunt them would harm their healing powers.  Then we dry them and prepare them.” 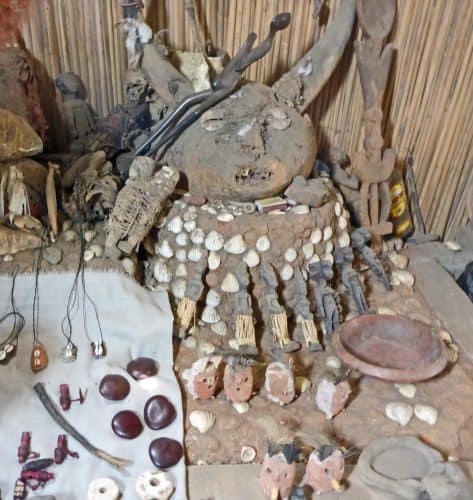 Suru had been talking non-stop for nearly 20 minutes when he led me into a dark hut and introduced me to Mr. Kpada Athanase Fafatepe. It was time for my consultation with a fetish doctor.

With Suru interpreting, he asked me a series of questions ranging from my marital status to what I was doing in Africa, nodding his head in recognition after each answer. He closed his eyes in a brief meditation and then proceeded to bless me, beginning by chanting as he struck a gatingo, a traditional instrument used in village ceremonies that produces a resonant bell-like sound. He then tapped me on the head with a gourd bowl and had me repeat my name three times.

Then came the moment of truth as he offered me a selection of fetishes to meet all my current needs:

The first was a travel fetish to protect me on my overland voyage in Africa. It consisted of an approximately two-inch piece of a small branch, stained red, with a hole in it and a tiny stick attached by a string.  I was told to ask for protection by speaking into the hole and then seal the wish by inserting the tiny stick.

A general good luck talisman – a tiny leather pouch on a string filled with 41 herbs and animal parts, with two seashells sewn on it – to wear around my neck.

A leba fetish to protect my home and family while I’m away. The small, dried mud figurine, rotund in shape, was topped with bird feathers and horse tail strands, had tiny sticks protruding and holes for eyes, with a kind of nose fashioned from a tiny hand-rolled tobacco cigarette.  He had me hold it in cupped hands and repeat my family name three times while he struck the gatingo and recited magical incantations.

A bagina fetish for better love life was described by Mr. Fafatepe as “natural African viagra.” I was instructed to cut a small piece from a nondescript twig, peel off the bark, soak it in liquid and then drink it. As Suru added, unabashedly:  “Put it in gin, Campari – whatever your favorite drink is – for an hour or two, then drink it and you will mate like an antelope.” 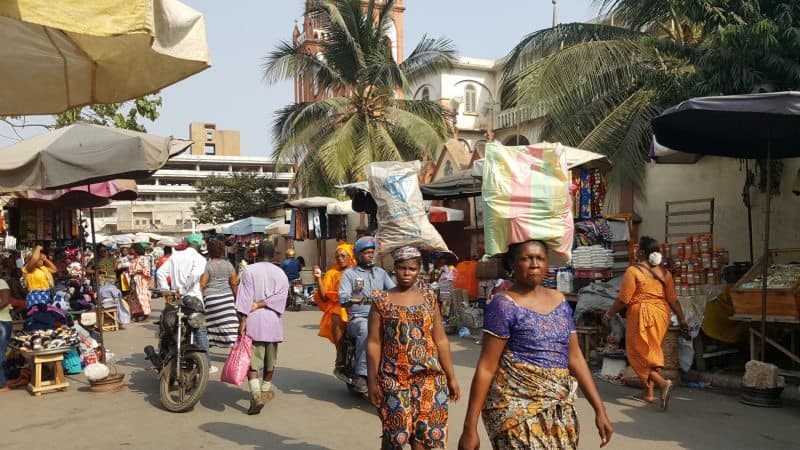 Women walking in the fetish market in Lome.

A fetish to enhance brain power – the seed of the ebony tree filled with ground monkey head and herbs – was to be worn as a necklace or activated by performing a simple ritual: hold the seed in my left hand, put my right hand in water, then rub the seed on my forehead in the shape of a cross.

Yes, the Marché des Fétiches is certainly grisly, where you are greeted by everything from dead vultures to dried rats. It smells rancid and rotten, and buzzing flies are everywhere, particularly in the areas where animals are being dried.

But it is a direct line to who the people of Togo really are. Though they are no longer in their villages in the bush living their traditional life, their fetish culture is still alive here, keeping them in touch with their roots and continuing to tap their ancestral path to wellness and happiness.

And as for the fetishes I received…on the road in Africa, my travels have been healthy, happy and problem-free, while back home the rain that we so desperately need has been coming down in buckets. What’s more, my wife reported in a WhatsApp message that the roof is no longer leaking. 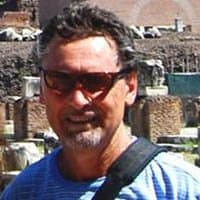 Freelance travel writer/photographer Edward Placidi has lived and traveled in 90 countries and penned articles for numerous newspapers, magazines and websites. When not traveling he is whipping up delicious dishes inspired by his Tuscan grandmother who taught him to cook. A passionate Italophile and supporter of the Azzurri (Italian national soccer team), he lives in Los Angeles with his wife Marian.