Tips on How To Freedom Camp in New Zealand 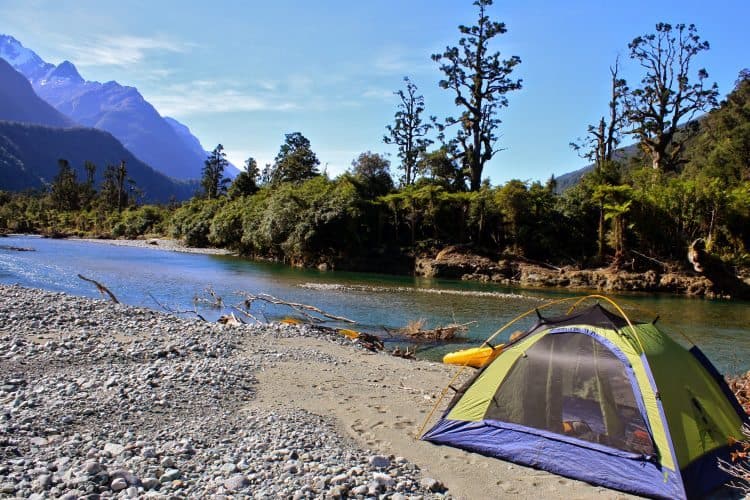 New Zealand is a country of 4 million citizens and 60 million sheep, spread out over an area roughly the size of Colorado.

Of the people, nearly a million live in Auckland. Two million more reside on the North Island, leaving only a million or so (and most of the sheep) on the rugged South Island. 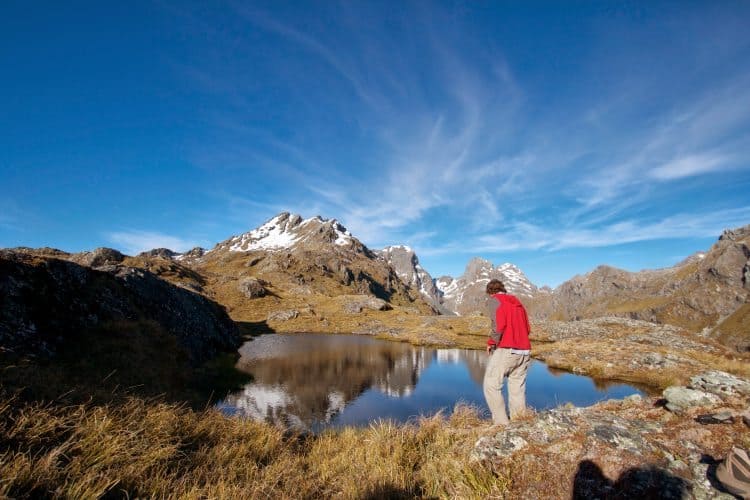 Ask locals to help you find the perfect place to Freedom camp in New Zealand.

What the numbers mean is simply this: the South Island has a great deal of unpopulated, open space – though if you arrive with Lord of the Rings vistas in mind, you might be surprised to find much of it denuded of trees and turned into pasture.

For the self-sufficient camper, though, there are a whole lot of places where you could conceivably pitch a tent or lie down in the grass. There are no bears – no dangerous animals at all, except the sandflies on the west coast – and the entire country is well organized and has excellent signage.

The downside to all this is that it draws hordes of travelers – New Zealand currently receives 2.5 million annually – and it seems most of them are WWOOFing, bike touring, backpacking or living temporarily out of a camper van.

Which is all fine, but being an exceptionally well-organized country, New Zealand’s solution to manage all these travelers is to corral them into featureless “holiday parks,” sardine-like Department of Conservation campsites and a massive network of hostels that allow “campers” to pitch tents on tiny patches of lawn.

Perhaps the camaraderie of such camping is part of the New Zealand experience, but for someone coming from the vast free-for-all that is backcountry camping in the western U.S., it can feel a bit stifling. Isn’t the whole point of camping to find solitude, and nature, and to sleep in a beautiful spot? Plus, New Zealand is expensive enough without paying $25 to park your tent on a suburban lawn. 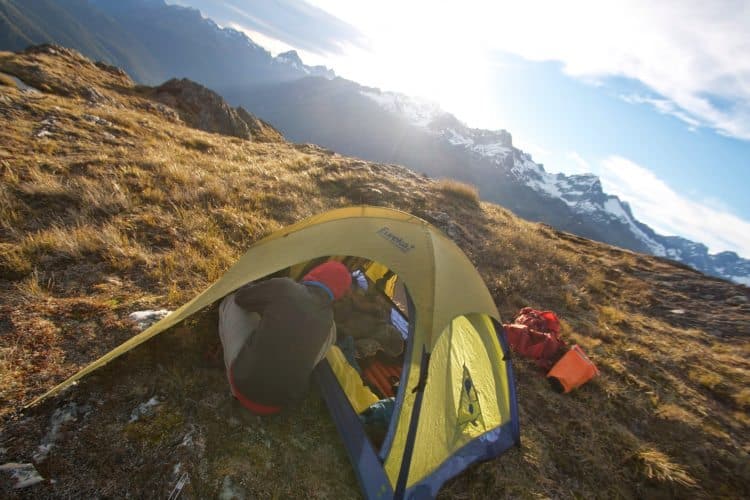 Freedom camping on the Routeburn track.

But if you find yourself and your camping gear in New Zealand, fear not. The Kiwis have coined a brilliant term to describe the act of camping free of charge outside a designated campsite: freedom camping. In some places, freedom camping is discouraged; in others, it’s part of the culture.

The trick is to get a feel for the place you’re in, talk to locals (without making it appear as though you’re only looking for a free ride), and carry a good atlas.

Note that camping is legal in New Zealand national parks as long as you’re 500 meters away from a trail or road. When my partner and I showed up in Queenstown to hike the Routeburn Track with no prior planning, we were dismissed by a Department of Conservation official who told us that all the huts and campsites were booked for the next two months and that, due to the geography, it was “virtually impossible” to find a suitable campsite 500 meters off-track.

She even brought out a topo map to illustrate her point. But Jesse and I had talked to locals who’d freedom-camped the Routeburn, and, as luck would have it while hitchhiking to the trailhead later that day we were picked up by two track guides. We unfolded our own topo map and they pointed out pristine alpine valleys just a few kilometers off the main track where we found both solitude and better campsites than the jam-packed DOC sites on the track. 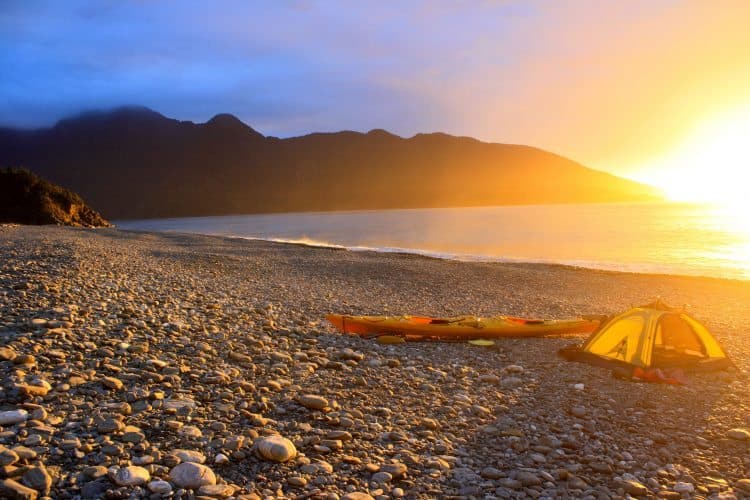 Camping on the remote Fjordland coast during a kayaking trip.

(Sidenote: this being said, do your research. The same tactic cannot be used so easily on the more-popular and nearby Milford Track.) 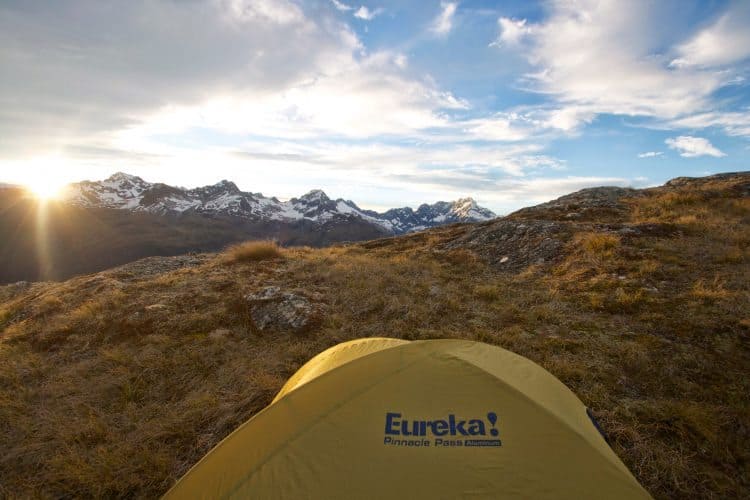 The Remarkables, New Zealand’s mountain range, in the background of a perfect camping spot.

Talk to locals, but avoid marching up to a stranger and asking, “Where can I camp for free around here?” Hang out at the local pub, have a beer or two, and casually inquire if there are any remote beaches/rivers/etc nearby where you might pop a tent.

Mention that you don’t require any facilities, and they’ll usually get the picture and be able to point you to some out-of-the-way place where you won’t be disturbed. Or sometimes, they’ll invite you back to their house.

Consult your map. There are certain popular stretches – the Haast Pass, for example, or the Catlins Coastal Route – where signs prohibit camping except at designated sites. But Kiwis are an industrious bunch, and not easily deterred by such signs.

Their strategy? Choose an area where overnight car parking is expected – say, at the trailhead to a multi day track. Park there, then walk a kilometer or so down the trail, or up the river, or wherever tickles your fancy and offers you a quiet, beautiful place to spend the night and enjoy a leisurely morning without worrying about someone barging in.

Park there, then walk a kilometer or so down the trail, or up the river, or wherever tickles your fancy and offers you a quiet, beautiful place to spend the night and enjoy a leisurely morning without worrying about someone barging in.

Be Prepared to Pay Up

Be prepared to pay for a campsite. Sometimes it works out for the best – Curio Bay in the Catlins, for example, is a managed camping area well worth your $12: instead of rows of sites, they present you with a map of soaring dunes and headlands, circle a few large areas, and tell you you’re welcome to camp anywhere you’d like.

Remember that there are only 1 million people in the South Island. The chances of someone driving at 6 o’clock in the morning down the remote dead-end road where you’ve surreptitiously pitched your tent is slim. And if someone does see you, it’s likely to be a fisherman, hunter or hiker who isn’t going to mind anyway.

Get off the beaten track. Yes, this is one of the most overused cliches in traveling. But popular hikes like the Great Walks are packed full during the summer months, and finding freedom and solitude can be a challenge. There are thousands of other ridgelines and valleys that receive virtually no traffic and are unregulated, like Tutoko Valley along the Milford Road in Fiordland. There, with a bit of backcountry experience, you can walk three hours through pristine rainforest, camp alone on the edge of a glacial river, and spend days exploring the area without seeing another soul.

There, with a bit of backcountry experience, you can walk three hours through pristine rainforest, camp alone on the edge of a glacial river, and spend days exploring the area without seeing another soul.

Be responsible. Although freedom camping is legal in most places, it’s often discouraged by DOC officials because they get money when people stay at their sites; and they’re deluged with unprepared, inexperienced trampers and campers.

If they told everyone to camp wherever they liked, the forests and beaches would be littered with toilet paper and too many people would be lost or hypothermic. But if you’re an experienced backcountry camper – and don’t delude yourself if you’re not – prove them wrong by choosing your site wisely, practicing Leave No Trace and being prepared.

Krista Lee Langlois has worked as a wilderness guide in Alaska, a sea kayaking guide in New Zealand, a journalist in New England and a teacher in the Marshall Islands. She currently lives in Durango, Colorado.