Tenerife: Discovering the Adventurous Side 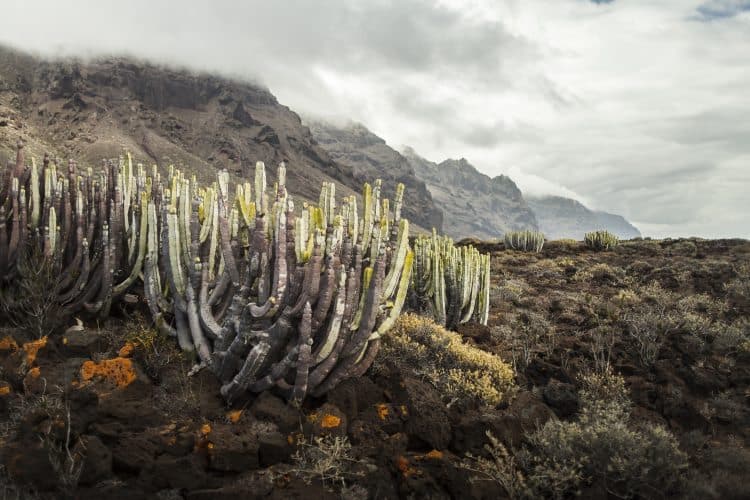 Adventure Hiking in the Canary Islands

The journey up into the mountains followed a winding, narrow trail, overlooking gorgeous vistas lit by cascading sunlight.

The drive from Tenerife-North Airport to Maliá Hacienda del Conde, my hotel destination in the largest of Spain’s seven Canary Islands, is beautiful.

In the distance, the 3,718-meter high Mount Teide volcano rises prominently from that haze into a clear sky, streaked white with snow.

I drove between a steep mountain on one side, endless blue ocean on the other. Towering cliffs dropped sharply off to water crashing on rocks far below, palm trees danced gently in a warm breeze, their leafy branches reflecting a hot sun: peaceful island life in all its idyllic glory.

A Search for Adventure

However, peaceful life isn’t what brought me to the Canary Islands.

“We want to show you that Tenerife is more than sand and beaches,” said Raquel Ceca Hernández, spokesperson for the region’s press agency, Tenerife No Limits, over locally produced sweet Spanish wine, a meal of tender Iberian pork, and Avocado gazpacho, later that night.

Island life in the Canaries is not quite Spanish, not quite native. A heavy Latin American influence is apparent everywhere, from many varieties of potatoes to the terrace enclosed irrigation beds, both have origins in Peru.

Many expats live in the islands, and much of the wildlife and indigenous fauna that call the region home (there are over 600 native fauna species) are also from elsewhere – evolving quickly because of isolation, becoming indigenous.

Hitting the trail in Tenerife.

That isolation makes it a unique habitat, ideal as an outdoor adventure destination.

To that end, I was invited on a writing trip highlighting the more adventurous side of a place known to many for its Carnaval de Santa Cruz (a boisterous pre-Lent festival), pristine water, great scuba diving, and gorgeous white sand beaches.

I arrived to be “amazed, surprised, and inspired. Don’t break legs, scream as much as you want, have fun,” said Pia Louw, promotional director for the tourism bureau, as I was heading to bed after dinner.

I found that amazement the next morning, Tuesday, hiking in Teno Alto, a mountainous region on the northern side of the island.

A driver dropped me off alone at Bar Los Bailaderos, a quaint stucco cafe in a small village center, just after 11 a.m. There, I was to meet ten other travelers and a guide.

Colorful doorways in Teno Alto, where I met my group before hiking.

The journey to the cafe traversed a precariously narrow cliffside road up the mountains through cascading sunlight – with horn blaring at every blind-corner to alert oncoming traffic – squeezing past terrified drivers coming the opposite way.

Outside the cafe, a few hikers took a break from the trail with a cup of coffee at a sunlit table. Birdsong cheerfully floated above the sound of leaves rustling. It was much cooler in the mountains than in the valley, by a good ten degrees or so.

“It’s a region traditionally inhabited by shepherds. It’s known as the dancing region,” Antunes said, noting that Teno Alto got its name from blowing palm trees and a few “deeply spiritual” folk tales, a remnant of the indigenous peoples’ pagan roots.

There’s a desolate beauty to Tenerife that takes your breath away.

“You can come to Tenerife every year, and every year you’ll find something different,” he continued, packing up to leave.

Out on the trail, the wind whipped through jagged rocks, shaking small shrubs and stubby plants. Elsewhere, gorges, the region’s water source, carved through a volcanic landscape. A few simple stone houses nestled around these watering holes, sealed from the elements by hand-made clay roof tiles.

Through a narrow gate in a fence, goats bleated as they leaped from my trudging boots. Cacti dotted the landscape; spots of bright color amidst subdued green tones.

Around a bend, I saw a man standing atop a steep, rocky hill, holding a long pole. Suddenly, he jumped from the rock, planting the pole and grasping it tightly to slow his descent.

In this fashion, he leaped effortlessly from rock to rock, moving quickly down the hill,

On the level ground, the man introduced himself as Samir Makarem Martin, a native keeping the tradition alive with jumping demonstrations to tour groups. Martin noted he used the ancient technique as a practical means of everyday travel.

“It’s a cultural feature. Each generation grew up watching their fathers and grandfathers do it. There’s a nostalgic feeling with it,” Martin explained, speaking Spanish through an English translator.

The pole is tapered, narrow at the end to create friction as the user slides toward the ground. When jumping, shepherds aimed the pole’s horn tipped end – these days, an iron spike – toward a rock below, leaping with precision. To demonstrate the pole’s use, Martin jumped from a 15-foot rock, driving the iron tip within inches of a coin, sliding easily down to the ground.

Despite the obvious athleticism required for the activity, officially called a ‘sport,’ Antunes said competition isn’t important for those who practice “shepherds leap.” Instead, it’s viewed as cultural ambassadorship.

“This is not about being a daredevil and trying to kill yourself. The idea is to practice on the floor, practice flexibility and stability, and then work up to it,” he said, while Martin demonstrated a few strength and flexibility exercises farmers practiced to build up their jumping ability.

After saying ‘goodbye’ to Martin, Antunes led the way a few miles down a narrow, steep path in the mountain to Punta de Teno, a region far below, distinguished by a flat plateau formed many years ago by lava meeting the ocean.

From above, the region didn’t look like anything special; however, up close, I found it to have a certain desolate charm.

Large cacti dominated the landscape, standing stark against distant mountains that sprung suddenly from the flat ground; dust kicked up with each step, and large boulders cast a dark shadow on black dirt. There wasn’t much vegetation, and sharp rocks required vigilant hiking. At the ocean’s edge, high cliffs dropped off suddenly to water crashing on rocks far below.

Eventually, we reached a red and white striped lighthouse on a narrow outcropping of rocks. There, sunburned, footsore and happy, we ended our trek.

There, sunburned, footsore and happy, we ended our trek.

During a deployment as a firefighter with the USAF to the sweltering Middle East, Andy was bitten by the travel bug and smitten with the allure of adventure. Since then, he’s traveled everywhere; and when he isn’t on the road, he’s dreaming of far away places.A 2016 graduate of the University of Massachusetts Amherst he’s now at Bay Path University studying an MFA in Creative Non Fiction, and works as a beat reporter at a small daily newspaper.Andy lives in S. Deerfield Mass.