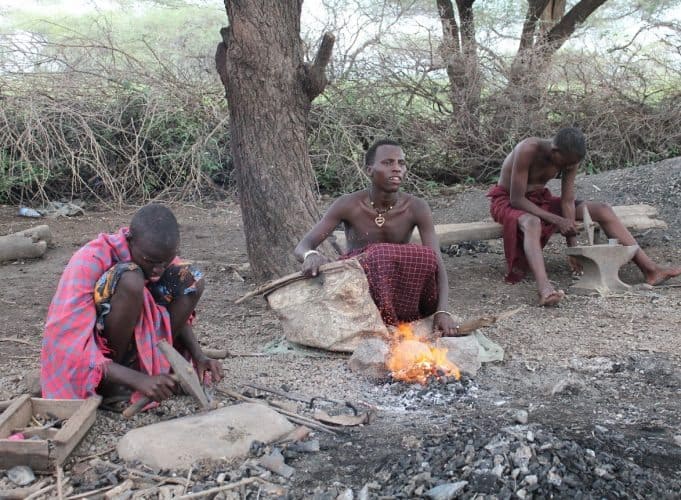 The Barbaig Nomads of Tanzania

The clang of steel on steel echoes through the early morning forest, signaling that the metalworkers are already at work. 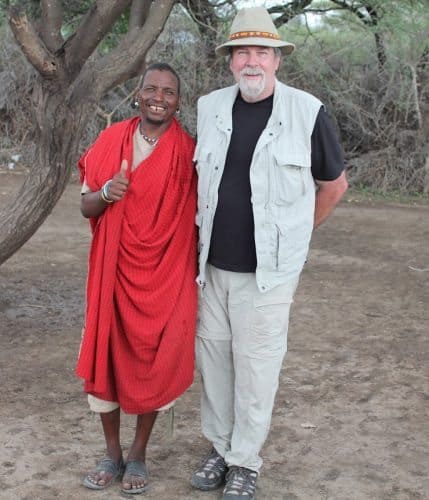 The author visits with a Barbaig elder in Tanzania.

It is the sound of a select group of highly skilled men, Barbaig blacksmiths, who are carrying on a tradition and fulfilling a need passed down from their forefathers since before recorded time.

Most visitors to East Africa go on traditional safaris to see the wonderful game parks, but more and more have begun to venture into the rugged far western areas, and by doing so they meet the lovely people of the Ngorogoro highlands.

Seven Tribes of the Datoga People

The Barbaig are one of seven tribes of the Datoga people, (Also spelled Tatooga or Datooga) a Nilotic speaking clan of nomads who occupy the Eyasi region of Western Tanzania. They live primarily around Mount Hanang which at 3400 meters, occupies a place of great religious significance for the Barbaig as well as being part of their myths and legends.

They are easily identifiable by the circular tattoo patterns around their eyes that they favor and their earth-toned clothing.  They consider themselves to be the oldest tribe in all of Tanzania although the neighboring Hadza and Maasai also make this same claim.

As pastoralists, they move whenever the grazing needs of their cattle herds require it. They are a simple people whose dress and homes reflect the ancient forest they occupy, but their daily lives are full of beauty. 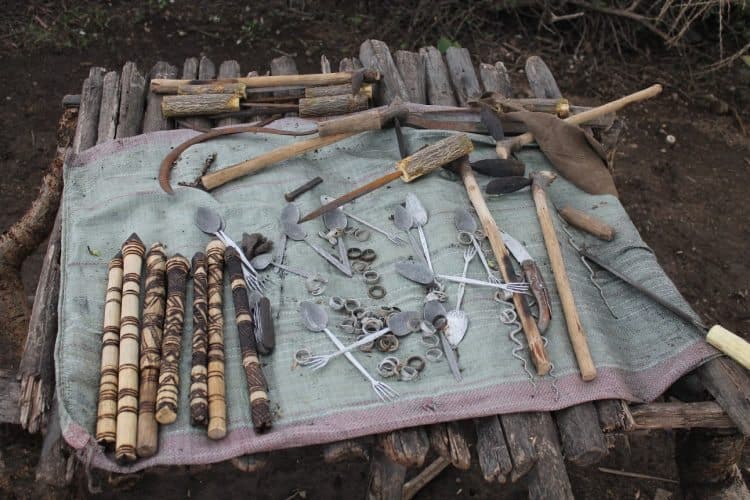 The tools used to create the blacksmith’s creations laid out on the ground.

Barbaig men are particularly known as skilled metal workers who prefer using hand-made tools and methods that most likely originated before the time of Christ.

Arrowheads and spear tips are their main product of particular importance as the people of this area still hunt with bows and arrows.

The Barbaig, known as fierce warriors in the past, provide these in quantity for not only themselves but for trade with their nomadic neighbors, the Maasai and Hadza, in exchange for cattle or sometimes game meat and whatever merchandise is available for barter.

The process begins with the making of a small fire using two sticks for friction. The flame is kept going all day long using a bellows made from sacks of hand stitched goat hide that pump air through a hollowed out tree branch. 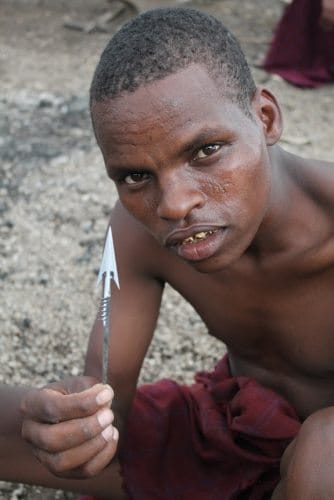 A blacksmith shows his work and his tribal scars on his face.

One man must sit and pump these bellows to constantly keep feeding oxygen to the fire.

Scrap metal that can be anything from old padlocks with keys to discarded jewelry and even old vehicle springs claimed by the rugged local roads is all collected to be reused.

The scrap metal is melted down and poured into a small mold.  The mold shapes the liquid metal into a long thin cylinder that after cooling is passed to a second craftsman who begins flattening it using a hammer against an anvil.

With timed, rhythmic blows imprinted in his muscles from a lifetime of repetition, he hammers the cooled metal into a flat workable shape that is then hand filed to a razor sharp point.  To make sure the arrow does not dislodge from its prey during the hunt, jagged barbs are added behind the head.

The final product is so delicately honed as to seem made by a machine and can truly be compared to the work of an artist.  Polishing it to a high gloss is not necessary for its use but is simply the mark of a proud craftsman.  A Barbaig blacksmith can make dozens of arrowheads in a day. 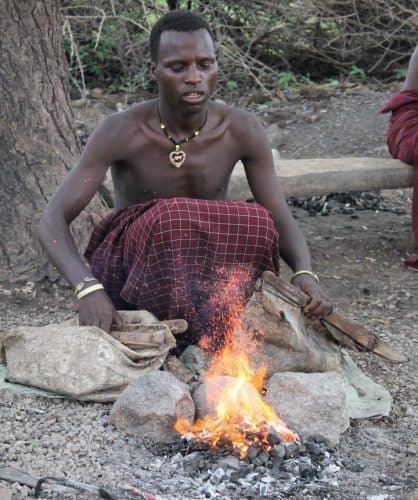 The handmade bellows create the intense heat needed to melt the scrap metal.

But their skills are not confined to weaponry of the hunt; they also make knives, forks, spoons, scythes, and jewelry.   They are intricate wood carvers whose knife blades are invisibly embedded inside beautifully crafted, wood fired handles.

Their brass bracelets, neckpieces, rings, and anklets, are highly sought after by both neighboring tribes and visiting collectors.

A visit to one of their villages to see all of these works on display is all the more impressive when realizing that everything was made from discarded scraps.

Barbaig women, not to be outdone, create wonderfully colored beaded skirts made of finely tanned goat hide that makes it incredibly soft and is often worked into long fringes that they tie around themselves with beaded clasps.  This is worn over a traditional grass skirt.

They often wear large brass necklaces and multiple brass bracelets that can completely fill their lower arms. A popular pastime for the women is adding beadwork to practical, everyday objects such as gourds or milk and water carriers. 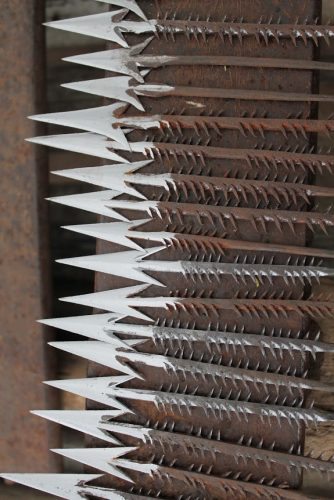 Arrow tips made by the blacksmiths.

Artistic creations are usually the mark of a stationery people as traditional nomads rarely have time for such pursuits.  The Barbaig have shown that even a wandering lifestyle can produce objects of great beauty.

Word is getting out about these formerly isolated craftsmen and more and more safari companies are now offering cultural tours into their lands.  Those who visit will find them very welcoming people.

This nomadic tribe has made the pursuit of practical art an intricate part of their everyday life.

James Michael Dorsey is an explorer, award winning author, and lecturer who has traveled extensively in 45 countries. He has spent the past two decades researching remote cultures around the world.He is a contributing editor at Transitions Abroad and a frequent contributor to United Airlines’ inflight magazine.