Switzerland: Chaplin’s World and The Nest 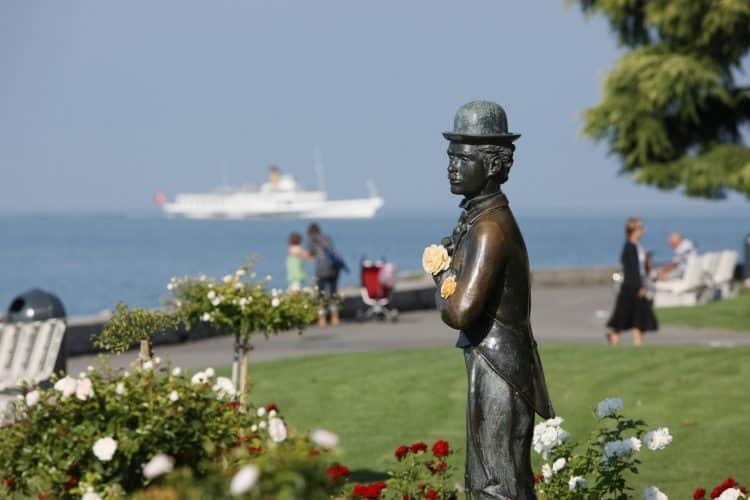 Let Me Introduce You to Mr. Chaplin

You may think you don’t like Charlie Chaplin, but you do. To visit Chaplin’s World in Vevey, Switzerland is to jump into Chaplin’s life, a life rich with humor, talent, audacious accomplishments, and scandal. 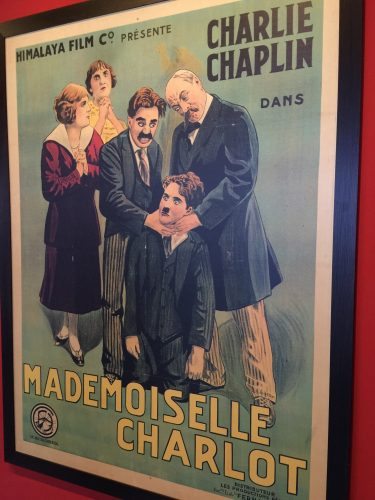 You are romanced by his films and bon vivant lifestyle, awestruck by his business acumen, and delighted by his silliness. Upon leaving, it feels like you’ve actually met the man!

From Nothing Comes Hope

A rag to riches story like Chaplin’s never grows old. We are captivated by hope, rooting for “The Tramp” in spite his mischief. Chaplin’s World begins with a film montage of his life and work. The theater then opens up to an alleyway set, where we can peer into his very humble one-room London flat.

As the experience progresses, visitors become part of his filmmaking, complete with props, character actors (although they aren’t living), scenery and sound effects. You visit a sound stage and walk through several sets that feature aspects of his comedy; his gags with food, cops, money and of course girls.  Finally, we see his accomplishments, his Oscars, and medals.

Banished From Hollywood Welcomed in Vevey 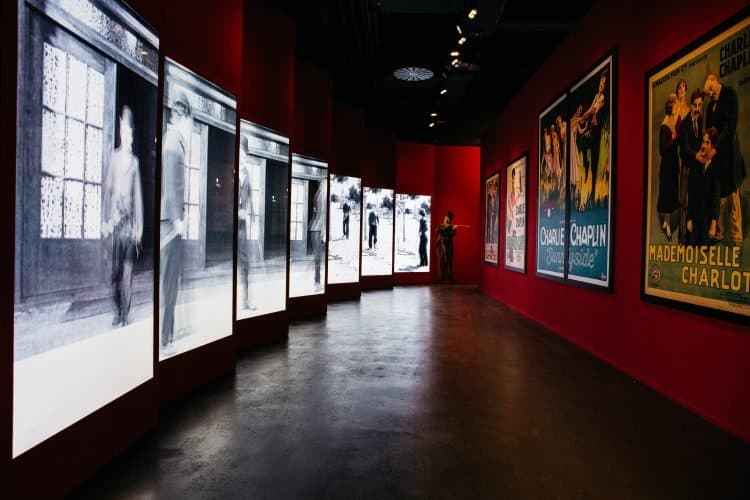 Chaplin spent the last 25 years of his life in Vevey. The museum is on the grounds of his villa there, which overlooks beautiful Lake Geneva and its classic Alpine view beyond.

Chaplin was exiled from the United States in 1952 because of his prior connections to communism.

Upon returning to the US, having been on holiday, Chaplin wasn’t allowed back in the country.  He never did gain is US citizenship and with the McCarthy era in full swing he was, like so many others in Hollywood, a victim of circumstances, punished by his beliefs.

After you visit the museum portion of Chaplin’s World, you’re invited to walk through the villa.  Here, visitors step into Chaplin’s private life.  Home movies are viewable in the parlor.

There is a terrific installation of a giant globe that one walks into to see the far reaching places Chaplin traveled, pre-jet engine.  In this same “globe room” we see old black and white movies of Chaplin’s travels, places like Java, Ireland, and Japan. 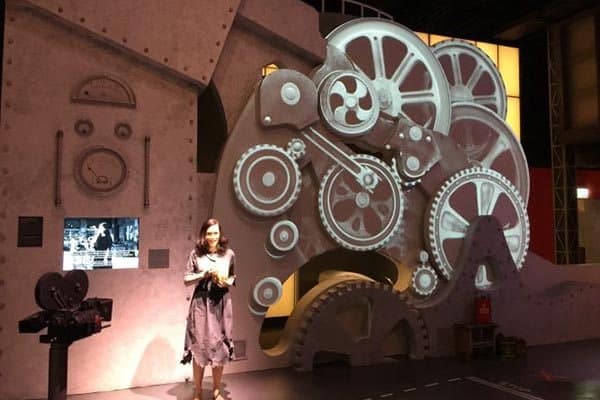 Paulette Goddard, one of Chaplin’s leading ladies, recreated here for her role in the movie “Modern Times”

Because Chaplin’s World is experiential, creatively curated and just plain fun, it appeals even to those who’ve never heard of him. Once you visit the museum, you’ll vow to see his films from beginning to end.

You’ll wish you had a father, friend or uncle who was like him! Chaplin’s charisma and charm, his slapstick ways, make you smile and that was his gift to us all.

The “nest,” a Sweet Discovery Experience

Vevey is also home to The “Nest”: Nestlé’s Discovery Centre, housed in the original Nestlé factory. Here too, the visit begins with a kind of Nestlé “factory ride.” But, before the start of the museum “experience,” you’re bowled over by the grand, fun, friendly open space that greets you just past its doors. 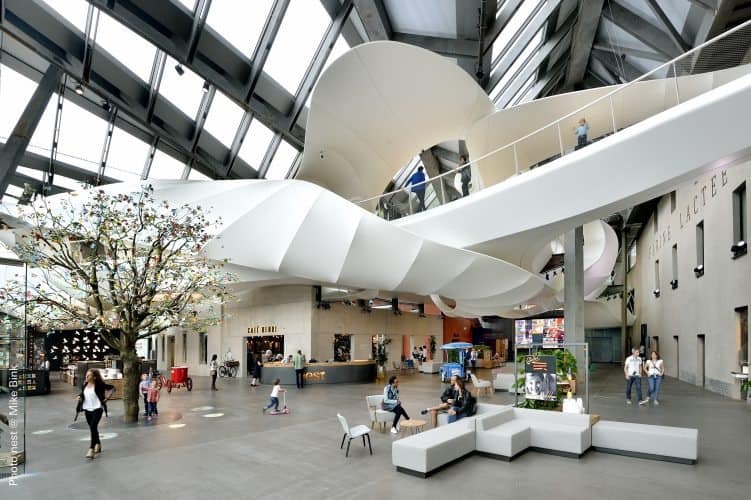 Nest, the Nestle Experience, is a museum that tells the story of the Nestle company, from their humble beginnings to worldwide food giant.

“Nest” aims to tell the story of the company’s past, its founder Henri Nestlé, and then to link that story to the company’s mission and branding today.

Finally, “Nest” projects what the company’s concerns and goals will be for the future. This is all done through the inspired vision of architect David Linford and historian Alber Pfiffner.

There are four distinct parts to the “nest,” Foundations, Zeitgeist, Forum, and Visions.

Foundation introduces visitors to the company’s nineteenth-century roots using shadow plays, magic lanterns, staging, and props. We get to visit the laboratory of Henri Nestlé and through a unique blend of sound, imagery, and film we discover his first discovery – baby formula!

Next is Zeitgeist, 150 years of Nestlé’s past is put in time and place, paralleling great moments in history with Nestlé innovation. Open drawers, turn knobs, look into shadow boxes and learn how the company adapted to the world stage. 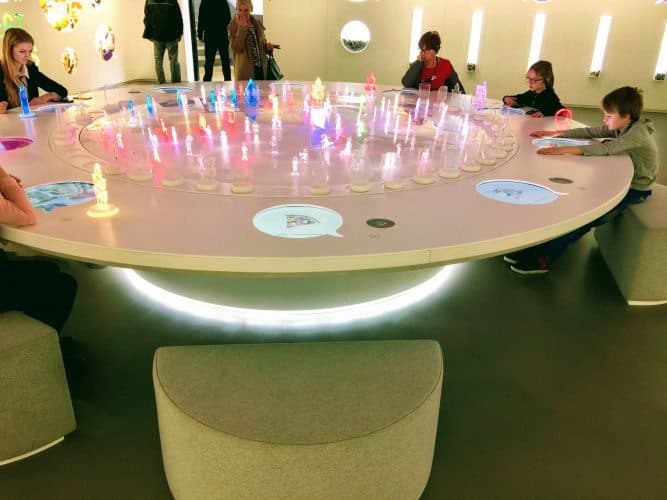 “Forum” at The “nest” addresses environmental concerns of the company today.

In a futuristic installation of big glowing round table, lit up with figures and screens, visitors “play” with the objects on the table, to see how their own decision-making affects outcomes with regard to these important themes. 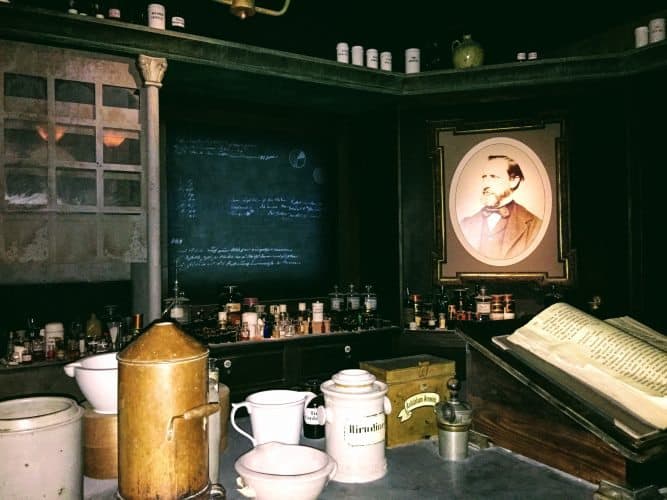 Lastly, we step into “nest” future, known as Visions. This section of the museum is like a floating space station.  It’s curved white walls, banisters, and smooth white resting “rocks,” invite us into the next century.

Shouldn’t we have jet packs on?! Here, using really cool interactive experiences, visitors explore the science and future of nutrition and well-being,

“Nest” is truly a museum for all ages. Installations are appreciated at every eye level and contemplative thought about today’s food industry and its effect on the planet are inescapable.

And you can think these deep thoughts while having a snack, lunch or brunch at Café Henri, an inviting bakeshop, and restaurant, just off the museum lobby. 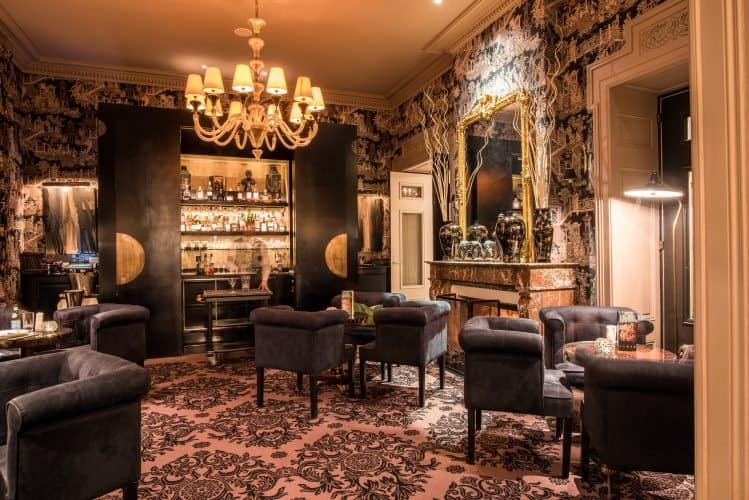 While both Chaplin’s World and The “nest” are in Vevey, fashion enthusiasts will want to make their way to Morges, Switzerland to The Expo Fondation Bolle. A much-anticipated exhibit called Audrey Hepburn & Hubert De Givenchy — An Elegant Friendship opens there May 19th and runs through September 17th, 2017.

The Canton of Vaud, also known as the Lake Geneva Region, offers wondrous things to do outside, but for those bad weather days, or when one wants to explore man’s accomplishments, visit these exciting experiential “museums.” They will open your eyes and your mind to something new! 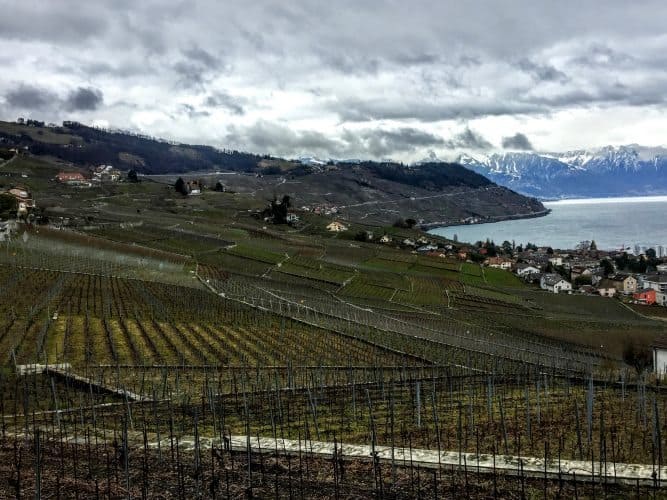 Things to Splurge on While Visiting Vevey

–  Stay at the Grand Hotel Du Lac, a Relais & Chateaux hotel that is all luxury and high design je ne sais quoi.  While there, enjoy restaurant Les Saisons where you can taste Chef Thomas Neeser’s Michelin-star rated cuisine.

–  Visit the UNESCO terraced vineyards of Lavaux. Cultivated originally by monks in the 11th century, it’s said these vineyards enjoy three suns; the sun above, the sun’s reflection from the lake, and the sun’s heat radiating from the stone walls.

Be sure to taste the Chasselas wine. Actually do more than taste it, drink it as much as possible while in the region because you won’t get it elsewhere.

–  Make it your mission to visit the Domaine Du Daley and taste the extraordinary Swiss wines this vineyard has produced since 1392.

– Stroll through the charming village of Saint-Saphorin, the definition of quaint–camera worthy for even the most novice shooter.

– Hop on board the GoldenPass railway and get your “hills are alive” fix. Hop off at Rougemont and “fondue it” at the Hotel Valrose‘s lobby restaurant of the same name.

Cathie Arquilla is proud to be a veteran GoNOMAD writer.  Both travel writer and fashion stylist, not only can Cathie tell us why to go, but what to wear!  Happiest while experiencing a local scene, its grit or glamour, Cathie’s writing brings readers to a place and encourages them to go there too. She lives just outside of New York City.  To find out more about this renaissance gal with dual careers visit her website.