The Fillmore is one of the most well-known venues in San Francisco’s music scene.

On the 50th anniversary of the Summer of Love, San Francisco is feeling groovy

Haight-Ashbury is an interesting place. And this year, it’s about to get even more outrageous. As 2017 marks the 50th anniversary of San Francisco’s Summer of Love music festival, the celebration is going to be one for the history books.

Beginning in May, the festival will host more than 60 events, performances, exhibitions, and activities for visitors and locals alike to experience music, food, and culture of the city and its history.  It’s going to be hip, it’s going to be groovy, and it’s going to be a celebration of one of America’s most unique neighborhoods.

The Summer of Love festival first took place in 1967, with more than 100,000 people — mostly young hippies — converging in one San Francisco district to enjoy the arts while simultaneously protesting the Vietnam War.

The original Summer of Love festival took place in 1967, this year marks its 50th anniversary.

The original Summer of Love festival is best summed up by Bob Weir, the Grateful Dead’s guitarist performing at the event when he said “this festival, and Haight-Ashbury all together is about exploration, finding new ways of expression, and being aware of one’s existence”.

As the 50th year anniversary of the event approaches, the information regarding the events and performances can all be found on San Francisco’s Summer of Love website.

The history of the festival is a rich one; it’s a history worth exploring while in the San Francisco area to truly immerse yourself in the hippie-flower-child culture that makes it so unique.

We’ve compiled a list of historically significant and culturally vibrant locations in and around the Haight-Ashbury neighborhood. The locations all have their ties to the Summer of Love festival as past hosts of the celebration. For music lovers, history buffs, and inquisitive travelers alike, these venues are worth checking out while exploring the streets of San Francisco.

The Fillmore Music Hall, located at the corner of Fillmore and Geary Street, first opened its doors to the San Francisco neighborhood in 1912. As an old-fashioned, Italian-style dance hall, it became a popular location for Wednesday night masquerades and socials, and even more popular as a live music venue courtesy of Bill Graham’s “San Francisco Sound” rock-promotion. If you hear people referring to the “Get Acquainted Society” or the “Ambassador Dance Hall”, it’s safe to assume they’re talking about Fillmore. 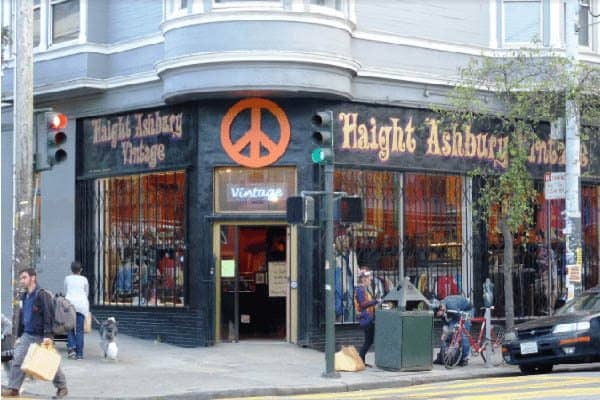 Haight-Ashbury is decorated with shops and cafes all with their uniquely painted storefronts.

As the location grew in its popularity from the 1950’s and 60’s, it became an icon of the musical and cultural Renaissance taking place in San Francisco. Young people traveled from near and far to experience the most innovative and exciting upcoming artists.

The dance hall is responsible for giving countless artists their start and provided a number of iconic musicians the chance to perform on their stage.

Musicians such as Jefferson Airplane, Grateful Dead, The Who, and Jimi Hendrix (just to name a few) got their start on the Fillmore Music Hall stage.

The hall became well-known as the venue that gave each of its audience members a free, psychedelic music poster of the performers after each show. This year, for the Summer of Love music festival, the dance hall will hold the Fillmore Jazz Festival. This annual event showcases the best of the jazz legends in the Bay Area in early July. It’s a concert hall worth checking out in the area, whether you see a show or just stop in to check out the display of rock & roll posters that cover its walls.

The Great American Music Hall holds the title as San Francisco’s oldest operating music venue. Located in the Tenderloin neighborhood on O’Farrell Street, it is a bit outside of the Haight-Ashbury neighborhood, but easy to get to on San Francisco’s impressive public transit system, the BART.

The Great American Music Hall is known for its unique interior design.

And it’s a venue worth seeing. The hall first opened in 1907  and still displays its original architecture, known for its decorative balconies, columns, and frescoes. Its history holds records of burlesque dancing, jazz, folk, and rock and roll concerts.

Holding approximately 600 people, the Great American Music Hall is small, quintessential, and authentic to San Francisco’s cultural and historical music scene. The venue still hosts up-and-coming artists and well-known musicians alike and draws a crowd on any night of the week.

The city’s polo field hosted one of the most iconic and memorable events in the history of the Summer of Love festival. It was the original site of the Human Be-In. This event took place on January 14th, 1967 and marked San Francisco, and Haight-Ashbury more specifically, as the epicenter of hippie and music culture.

The Human Be-In was an event where tens of thousands of people came together in a silent protest against the law that criminalized LSD. There were countless speakers, poets, musicians, and comedians that brought the event to life in 1967.

It was known as one of the first events leading up to the first-ever Summer of Love festival. Today, it’s recognized historically and culturally by its phrase “tune in, turn on, and drop out”.

The Summer of Love 2017 ads still portrays the same vibe as they did 50 years ago.

A number of events during the Summer of Love 50th anniversary will take place in Golden Gate Park this year, from sing-alongs at the Botanical Garden to NightLife events in the California Academy of Sciences.

The history of the Summer of Love festival is one that often goes unaddressed in history books but has played a significant role in making San Francisco the city that it is today.

San Francisco is a city worth exploring, and knowing the history of some of its musical and historical havens is crucial for understanding its culture.

With the Summer of Love kicking off its 50th year anniversary in the summer of 2017, you now have the perfect excuse to head to the Bay Area, explore the grid-city streets, and celebrate music, art, life, and love.