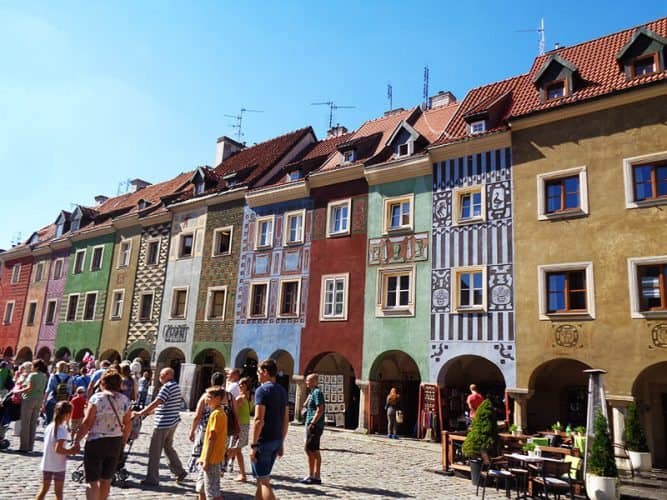 Pozna? – the city of goats and St. Martin’s croissants 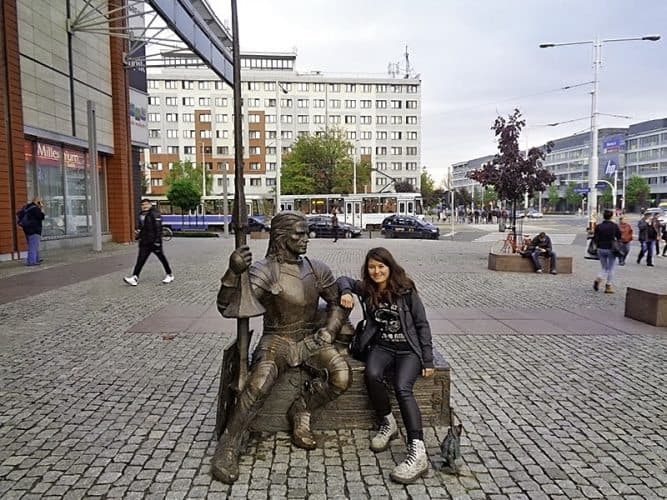 The author with the famous Knight and the Tiny Wroclaw in Posnan.

One of such cities is Pozna?, the 5th biggest city in Poland. Although this title sounds proud, don’t worry about getting overwhelmed by its size – most of the interesting things are located in the Old Town or within a walkable distance from there.

Reasons to go to Pozna?

You probably wonder what makes the city so special that you should visit it. Well, there’s a couple of reasons to go to Pozna?. First of all, it’s an important cultural center of Poland.

There are various initiatives, such as letting artists cover certain buildings with graffiti. Take a walk down the streets and you’ll discover intriguing art on the walls. One of the most impressive murals I’ve seen was the 3D one in the ?ródka neighborhood. It depicts the history of ?ródka.

Pozna? is also one of the oldest Polish cities – the first written mention of it is dated 970. It’s so prominent, that its name appears in Polish national anthem.

What’s probably more important for you, it’s a charming city with lots of tenement houses and old buildings. For those of you who are interested in history, visiting the city will be a fascinating adventure increasing your knowledge about Poland.

Where is it located? 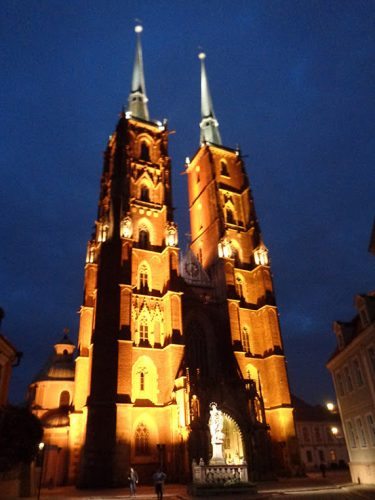 The Cathedral Wroclaw is dramatically lit up at night.

Pozna? is located in western Poland, in Greater Poland region, on the Warta river – the 3rd longest river in Poland. Pozna? is an important point on the Piast Trail – the oldest tourist and historical trail in Poland. It’s associated with the first Polish ruling dynasty – the Piasts – and leads to places that played a crucial role in the beginning of the history of Poland.

You can get to Pozna? by plane. There are direct flights to Pozna? from many European countries, as well as Egypt, Canary Islands, United Arab Emirates, Israel, and Morocco. If you don’t like planes, you can search for bus connections between bigger European cities and Pozna?. If you travel from other Polish cities and want to save some money, probably the cheapest option would be choosing Polski Bus. It’s also possible to get to Pozna? by train and – obviously – by car.

There are trams and buses in Pozna? that will get you everywhere you want. You can find more info on Pozna? public transportation website, but if you want to search for specific routes, using jakdojade.pl website would be the easiest. You can also download an app if you plan to use public transportation in Pozna? or other Polish cities more often.

If you go to Pozna?, you can’t miss the Old Town Square. It’s one of the oldest and most beautiful squares in Poland. You’ll see two-story tenement houses, in which, apart from flats, there were also shops and workshops. The square gives you an idea how Polish cities looked like centuries ago. 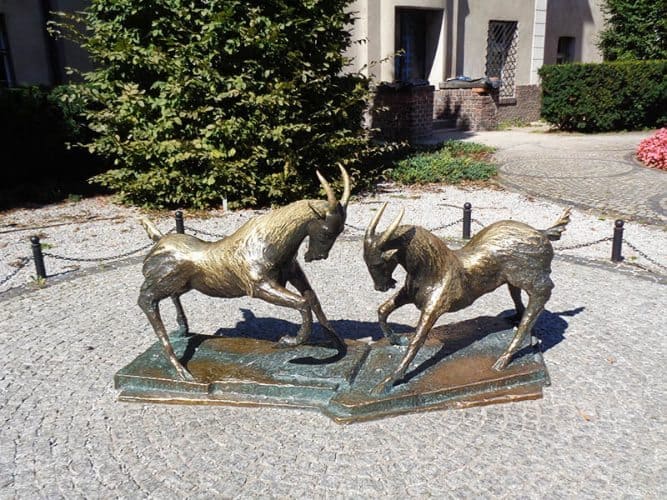 These goats are the symbol of Poznan, memorialized in bronze in the town square.

The main building located in the center of the square is the City Hall, build at the turn of 13th and 14th centuries. It’s the most magnificent renaissance building in G

reater Poland. There’s a clock on its tower, that punctually at noon each day becomes a big tourist attraction for two reasons. Firstly, at that time the bugle call is played. Secondly (and probably more importantly), two mechanical goats show up there to do their little performance – butting each other’s heads.

The first goat mechanism appeared in 1551 and there’s a legend connected with it. At that time the City Hall in Pozna? expanded. Bart?omiej the locksmith made the new decoration of the tower – the clock with goats. 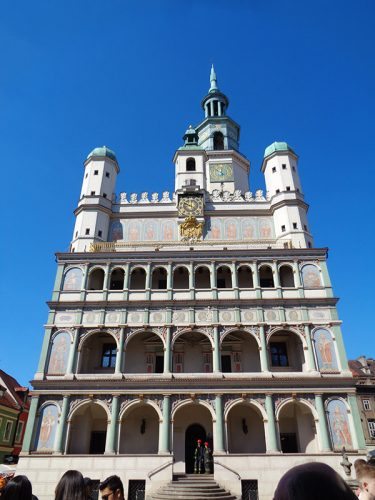 To commemorate this, there was a sumptuous banquet arranged. The roasted mutton leg was supposed to delight prominent guests such as the governor of Pozna? with his wife, but, unfortunately, Pietrek the cook had burnt it.

To save the situation, he ran to the city and stole two goats, which, however, refused to become a dish and escaped from the cook. They climbed up the tower and started to butt heads, making the crowd laugh.

This situation amused the governor of Pozna? so much that he decided not to punish Pietrek and ordered Bart?omiej to construct the mechanism with goats hitting each other with their horns.

The first mechanism, together with the City Hall tower, was destroyed by the lightning in 1675. It was rebuilt in 1913.

Another sign of Pozna?’s special feeling towards goats is the goat monument located in the Kolegiacki square.

If you like fairs, called in Polish jarmarki, you should come to Pozna? in June, when on the Old Town square jarmark ?wi?toja?ski takes place. You can buy their local handicrafts, as well as regional food products. There’s also a Christmas fair (jarmark bo?onarodzeniowy) in December, where, apart from the mention goods, you can also purchase Christmas decorations and specialties. 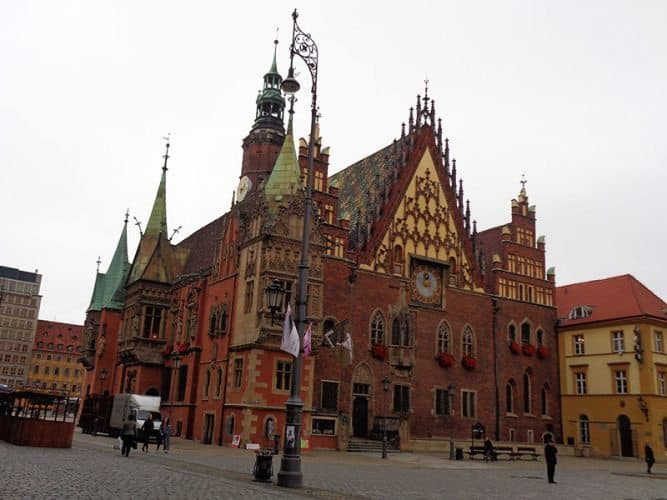 Another view of the romanesque City Hall.

Not far away from the Old Town Square, there’s the Royal Castle. It was built in 13th century by Przemys? I, the Duke of Greater Poland. Partially destroyed and reconstructed many times over the centuries, it remains the oldest royal residence in Poland. If you go up the castle tower, you’ll see the panorama of the city. There’s also another castle in Pozna? – a lot younger, built in 20th century Imperial Castle.

One of the oldest parts of Pozna? is Ostrów Tumski – a small island within the city. You’ll find there the oldest Polish cathedral, the Archcathedral Basilica of St. Peter and St. Paul. It’s the burial place of the first rulers of Poland. Another interesting building located in Ostrów Tumski is Genius Loci –  archeological reserve, which gives you an opportunity to find out more about the beginnings of Poland. The address of the reserve is Ksi?dza Ignacego Posadzkiego 3 street.

Pozna? has also something to offer to those who like sports. You might go to the Lake Malta – formed in 1952 artificial lake – and walk, run or ski down the artificial ski slope. On Termalna 1 street there’s the biggest sport and recreation center in Poland – Termy Malta?skie.

Pozna? has also the zoo, located on Kra?cowa 81 street. All the mentioned above attractions are located within a walking distance from the Old Town.

The zoo is a bit further away, so you might want to take a bus to get there. If you decide to do so, choose the bus number 84. The zoo in Pozna? is constantly developing. Apart from seeing animals, you’ll get a chance to have a nice walk there. 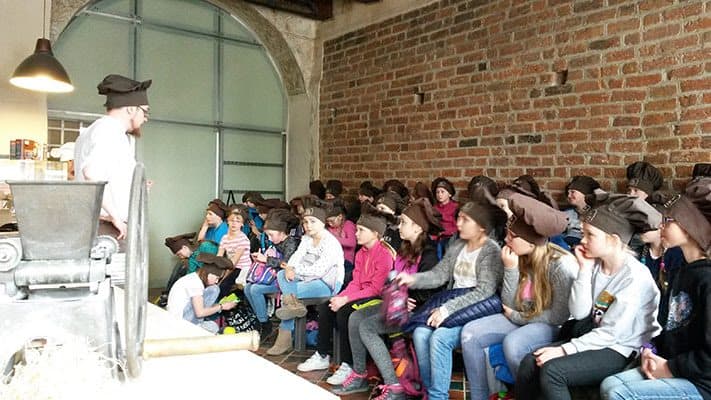 Inside the Crossaint Museum in Poznan.

I would recommend eating in small restaurant and bistros. The food there is not only cheaper than in fancy restaurants but also tastier and will give you a better idea of how Polish cuisine looks like. Ignore overpriced restaurants near the Old Town Square.

Go into one of the streets leading to the square (for example Wielka street, Wodna street, Wo?na street) and choose one of many places to eat. On G?ogowska 54 street you’ll find bistro called Pod Kozio?kiem. They serve traditional Polish food at good prices. The dishes they offer are dishes that appear in many Polish houses in dinner time.

The main ingredient of many dishes characteristic for the cuisine of Greater Poland, the region Pozna? is a part of, are potatoes. They even have a special name used only in Greater Poland – pyry. 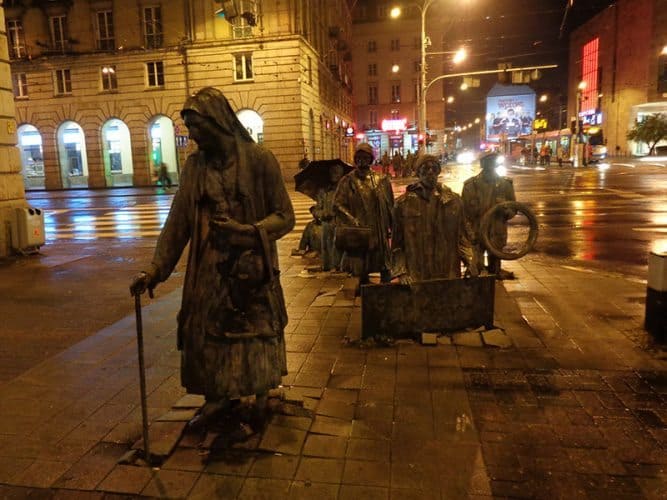 Statues on the streets of Wroclaw, Poland.

If you like unusual tastes, you should try czernina – a soup made of duck blood and poultry broth, spiced with sugar and vinegar, with dried fruits, served with homemade noodles or baked potatoes. What is surprising about the soup is that its taste is rather sweet.

Speaking about sweet things – one of the most famous sweets from Pozna? are rogale ?wi?tomarci?skie – St. Martin’s croissants. The croissants are labeled as Geographical Indications and Traditional Specialities in the European Union.

It means that to use a certain name, the product has to be made in a specific region and its recipe is strictly regulated. Rogale ?wi?tomarci?skie consists of yeast puff pastry and white poppy seed filling.

The filling, apart from white poppy seeds, contains sugar, nuts, eggs, butter, raisins and other dried fruits. The croissants have been baked since 1860. The shape of croissants, which reminds a horseshoe, derives from pagan times, when people used to sacrifice oxen to gods or, instead, dough shaped as ox horns.

The Church took over the shape but gave it another interpretation: the horseshoe shape was supposed to symbolize the horseshoe that was lost by St. Martin.

The most common Polish alcohol beverages are vodka and beer. You’ll find both in good prices in a chain bar called Pijalnia Wódki i Piwa. Apart from cheap beer and vodka shots, they also offer tasty drinks and small typical Polish dishes.

The main theme of the pubs is PRL – the Polish People’s Republic (the times when Poland was under Communist control). You will find characteristic for that time decorations, newspapers and other gadgets. You can only pay with cash there – just like in the PRL times. One of the pubs of that chain is located on Stary Rynek 85 street.

You will find characteristic for that time decorations, newspapers and other gadgets. You can only pay with cash there – just like in the PRL times. One of the pubs of that chain is located on Stary Rynek 85 street.

If you prefer craft beer, Pozna? has something for you as well. One of the most famous craft beer pubs is Piwna Stopa, located on Szewska 7 street. They serve delicious beer from Polish and foreign craft breweries. Just next to it there’s a bar called Rock Gara?. Gara? means garage and that’s exactly how the place looks like.

There’s quite a big variety of beers there too – if Piwna Stopa is too crowded, you can try to find a spot in Rock Gara?. Another nice pub is Tanner’s Irish Pub.

Usually, the only Irish element in Polish-Irish pubs is that you can get Guinness there, but fortunately Tanner’s Irish Pub managed to reconstruct some of the original Irish pub’s atmosphere. Another interesting pub is run by a huge fan of one of the biggest Polish alternative bands – Kult. The whole interior is dedicated to the band – you’ll see their posters, autographs, band shirts, concert photos etc.

You’ll also listen to their music there. The pub’s name is – surprise, surprise – Kultowa and it’s located on Wroc?awska 16 street.

The whole interior is dedicated to the band – you’ll see their posters, autographs, band shirts, concert photos etc. You’ll also listen to their music there. The pub’s name is – surprise, surprise – Kultowa and it’s located on Wroc?awska 16 street.

So once again – why Pozna??

As I was trying to prove to you, Pozna? is an enjoyable city. Not too big, not too small – you won’t get too lost there, but you also won’t get bored. Pozna? definitely has its unique atmosphere, that’s created by the rich history of
the city, its artistic vibe, and openness of the citizens. No matter if you’re a history lover or a graffiti enthusiast, you’ll find something for yourself in Pozna?.

Alicja Borza is an IT and sociology graduate and travel writer from Poland. Apart from traveling, she likes painting, designing computer graphics and jewelry. Whenever she visits another place, she tries to get to know every aspect of it, including local cuisine.  So far she’s visited 53 countries on four continents.