In his trademark witty and informative style, David Downie embarks on a quest to discover “What is it about the history of Paris that has made it a food lover’s paradise?”

Long before Marie Antoinette said, “Let them eat cake!” (actually, it was brioche), the Romans of Paris devoured foie gras, and live oysters rushed in from the Atlantic; one Medieval cookbook describes a thirty-two part meal featuring hare stew, eel soup, and honeyed wine; during the last great banquet at Versailles a year before the Revolution the gourmand Louis XVI savored thirty-two main dishes and sixteen desserts; yet, in 1812, Grimod de la Reynière, the father of French gastronomy, regaled guests with fifty-two courses, fifteen wines, three types of coffee, and seventeen liqueurs.

Following the contours of history and the geography of the city, Downie sweeps readers on an insider’s gourmet walking tour of Paris and its environs in A Taste of Paris, revealing the locations of Roman butcher shops, classic Belle Epoque bistros serving diners today and Marie Antoinette’s exquisite vegetable garden that still supplies produce, no longer to the unfortunate queen, but to the legendary Alain Ducasse and his stylish restaurant inside the palace of Versailles.

Along the way, readers learn why the rich culinary heritage of France still makes Paris the ultimate arbiter in the world of food.

An excerpt from David Downie’s new book, A Taste of Paris: A History of the Parisian Love Affair with Food 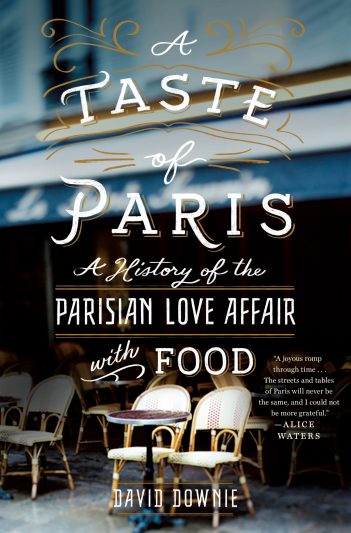 Bubble, Bubble: Two historic eateries in Paris whisk you back to the Gilded Age of boiled beef: Bouillon Chartier and Bouillon Racine.

Chartier is off the Grands Boulevards. Not much has changed since the 1890s at Chartier let alone since the 1970s or ’80s when I was a regular.

Since we’ve spent time among boulevardiers and had aperitifs at Chartier several hundred pages ago, we might happily hit the Latin Quarter, settling onto moleskin banquettes at Bouillon Racine, founded by the Chartier family in 1906. Gray-hairs remember the locale’s nadir as the staff cafeteria for university professors—the Sorbonne is two blocks east.

To be clear, you didn’t and don’t go to Paris’ bouillons for gourmet cuisine, au contraire. Order something safe: pumpkin soup, rib-eye steak with fries, and maybe some crème brûlée, then imagine la petite bourgeoisie of a century ago flocking to the Racine and hundreds of other similar eateries designed to dazzle with décor and comfort with reasonably priced, reasonably good food and cheery bonne chère.

The first Bouillon was born in rue de la Coquillière near Les Halles’ wholesale meat market, where master-butcher Pierre-Louis Duval, purveyor to Napoléon III, served broth to workers and local white collars at tiny tables packed side by side facing crowded banquettes. The boeuf was fresh, the premises clean and modern.

This was the original fast food. Waiters and waitresses provided brisk service, wearing the white aprons of the butcher’s guild. The outfit stuck, becoming iconic of France with penguin-like variations across Paris and the world, particularly in cafés, bistros, and brasseries.

Within a generation, Duval and son had 8 then 33 Bouillons across town. By the early 1900s the Bouillon count had risen to 250-plus, including other knockoff chains like Duval’s main rival, Chartier.

As you sup on beef at Bouillon Racine, enhanced by Monsieur Parmentier’s spuds, you might mirthfully reflect that the world’s first fast-food chains selling boeuf and sometimes fries were Parisian. And you might chortle over certain natives’ righteous wrath concerning the burger joints proliferating across gastronomy’s holy land. Is it envy, because the New World burger beat out boiled beef and bouillon?

Voting with the wallet, like laissez-faire economic theory, isn’t a concept current Parisians seem comfortable with. Witness the surprising factoid that the world’s second-biggest market for the golden arches is France. Those nearly 1,300 franchises aren’t filled uniquely by traveling Yankees.

The French inhale burgers and fries—at a leisurely pace, slowing the notion of “fast” and stretching French conceptions of “food.” McDonald’s restaurants are often physically hemmed by rival French or European chains and cheapo eateries. All told, in 2015, an estimated 1.1 billion hamburgers were served, worth well over $2 billion.

Three-quarters of restaurants in France serve burgers today, and in eight out of ten of them, burgers are the hottest item. Le Dali brasserie at the five-star Hôtel Le Meurice raises the stakes and stats with its palatial luxe patties priced at about $45.

As of fall 2016 the informal French consumer price index known as the “Jambon-Beurre”— ham and butter on a baguette—has been supplanted by the “Burger Index.” There’s only one food more popular in France than burgers and fries: pizza.

“Steak like wine is a basic building block of France,” wrote chain-smoking philosopher Roland Barthes in the mid-1950s, “it is a French possession (but encircled by invading American steaks) . . . fries are the alimentary symbol of being French.”

Too bad Barthes, genuinely brilliant, couldn’t get beyond the tragicomic boeuf chauvinism, failing to comment on the peerless French capacity for appropriation and revisionism. That traitorous old Vincent La Chapelle way back in 1735, in the service of Lord Chesterfield of England, had the effrontery to give a recipe for “beef steak à l’anglaise,” among his boss’s favorites, devoured since the days of Robin Hood.

Translated from English into French the cookbook revolutionized French cuisine. But bifteck really only caught fire in France post-Waterloo thanks to the Brits (les Roast-beefs) or so Alexandre Dumas claimed.

The French have been enthusiastic carnivores since antiquity,  but steak or steack or bifteck, as you please, served with fried potatoes really only went viral in the 1900s thanks to pesky Brits and Doughboy amerloques who seemed strangely familiar with the combo long before the fast food arrived.

As to les fries, Parmentier and Grimod mention potatoes fried in butter. But since the French were the last nation to embrace la pomme de terre, who’s to say spuds weren’t being fried in oil or grease or butter in Germany, Spain, and Italy in the 1500s or in America in the 1600s or 1700s? Who, you ask? Why nativist Frenchmen of course to whom the fried potato belongs as a birthright. 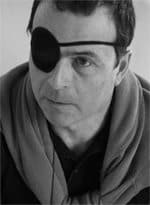 Excerpted from A TASTE OF PARIS: A History of the Parisian Love Affair with Food by David Downie. © 2017 by the author and reprinted by permission of St. Martin’s Press.

David Downie, a native San Franciscan, lived in New York, Providence, Rome, and Milan before moving to Paris in the mid-80s. He divides his time between France and Italy. His travel, food, and arts features have appeared in leading print and online publications including Bon Appétit, Gourmet, Saveur, Epicurious.com, and Gault & Millau, the premier French food guide. He is the author of over a dozen nonfiction books, including the highly acclaimed Paris, Paris and A Passion for Paris

Please visit David Downie’s websites and blogs: www.davidddownie.com; www.parisparistours.com.
Buy A Passion for Paris: Romanticism and Romance in the City of Light on Amazon