North Sonoma Coast: The Wild Side of Wine Country

Despite the fog and Lack of Cell service, this area is full of Surprises

Exploring the North Sonoma Coast of California is one of my favorite things to do while visiting the state. This less visited part of Sonoma County has much to offer those willing to brave fog, narrow winding roads and lack of cell phone coverage.

Since my days at US Coast Guard cook school in Southern Sonoma County I’ve been exploring the food, wine and natural highlights of the area for decades. Although I had traveled much of the coast, the stretch between Jenner and Gualala patiently waited my exploration. 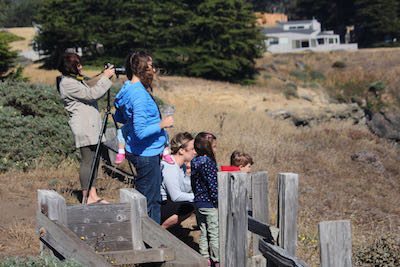 Destiny reared its head in the form of an invitation to attend a 2 ½ day photography course in Sea Ranch, just south of Gualala. I’d been itching to see this part of the North Sonoma coast and signed up right away.

The drive from San Francisco would provide many fun stops before arrival in a vacation home called Abalone Bay at Sea Ranch.

I had volunteered to cook some of the meals, and would need to pick up provisions. This was a perfect opportunity to find some of the region’s best food and wine.

Sunday traffic was light as I made my way through the streets of San Francisco headed for the Golden Gate Bridge. The massive red towers of the famous bridge were half eaten up by the ubiquitous fog rolling in from the Pacific Ocean as I drove on to Sausalito for lunch. In Sausalito, I eschewed web-based travel guides for restaurant recommendations.

Seafood enchilada at Salito’s in Sausalito

I preferred to wing it and ended up at Salitos Crab House and Prime Rib restaurant on the waterfront for lunch.

This was a great choice as my crab enchilada, a specialty of the house, came out, fast, beautiful, and delicious.

Paired with the house-made kettle bread I was fueled up for my 3-hour ride north. I envied those hanging out on the outdoor dining area who didn’t have a long drive ahead of them as they sipped their mimosas and other libations. My liquid reward would come soon enough.

I drove up highway 101 to the Sebastopol exit onto highway 116. This route wound through parts of the Russian River wine country. I had time for an impromptu stop if some wine or food place grabbed me along this cornucopia of food and wine.

A few miles out of Sebastopol the orchards of apples and other stone fruit started to give way to grapes.

My eyes dilated and my senses heightened knowing wineries of world-class fame were just up the road. Yes friends, soon there would be wine.

Merry Edwards was the first winery with a tasting room I spied. It being one of my all-time favorite special occasion wines made a stop mandatory. One of the perks of travel writing is free tasting at most wineries!

I tried three red wines and two whites of which the Sauvignon Blanc was my favorite. At $60+ per bottle I passed on buying, but deeply enjoyed the tasting experience.

Next stop was the Big Bottom Market in Guerneville for some local food products.

Guerneville was teeming with day-trippers hanging out in the streets and in the Russian River enjoying the perfect summer day under towering redwood trees.

Over fifty colorful kayaks and canoes studded the river with happy visitors. If time had allowed it would have been great to join the river-floating fun, but I was on a mission.

I found the Big Bottom Market easily on the main drag and grabbed some of the best goat cheese ever, along with crackers, hard cider, and yogurt. It was hard to leave Guerneville but my appointment at Fort Ross Vineyards was pulling me away to the North Sonoma coast.

My not-so-speedy Toyota Yaris and I arrived at the fork in the road where highway 116 meets the historic highway 1. This coastal highway is one of the most scenic, scary, fun drives in all of the US!

A few miles north of Jenner I found the turnoff to Fort Ross vineyards, marked only by a small highway sign that read, tasting room 2.5 miles, and headed up the Mt Everest-like steep 18% grade.

After 3 miles had ticked off on my odometer I thought it best to turn around since it seemed I had missed the entrance. I neglected to bring the address with me and there was no cell phone signal to help me find the winery.

Finally, as I was looking for a place to turn around to head back down I came to Fort Ross Vineyards, a winery in the woods.

Fort Ross Vineyard is in the newly formed Fort Ross- Seaview Appellation, established December 2011. Way up here in the forest they are producing some excellent wines. The tasting room has a deck overlooking the Pacific Ocean and the forested slopes of the Coastal Range.

The setting casts a spell on visitors before the first sip of wine. This was practically a wilderness wine tasting experience.  I would have bought a case of their fine wines if not for the pricey nature— $40-50. 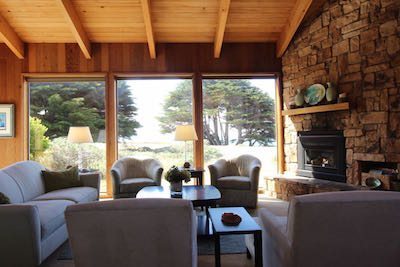 Down the mountain I plunged to my refuge for the next three nights. The Sea Ranch is a unique enclave of home sites spread along the coast for 10 miles. Many of the homes blend into the scenery and look alike.

This is part of the plan. The Sea Ranch doesn’t like owner’s homes to stick out. I got to hand it to them, they have preserved the area flora and fauna well for a big subdivision.

I saw many types of birds, several deer, a great horned owl, and I caught a turkey vulture with the full moon in the same frame for a  totally cool photo.

A mere five- minute walk from the house we stayed in was a seal colony. At any given time there were 15-25 seals lounging about making for a perfect photo opportunity. An occasional groan or grunt punctuated the sound of waves on the rocks from the vociferous seals in residence. 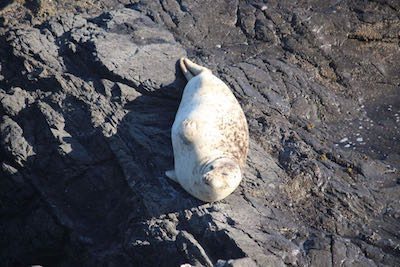 Winking seal at The Sea Ranch

One of the best surprises of my visit was leaving the Mid-Atlantic heat behind.

I left daytime temperatures in the nineties for highs that barely reached 70° Fahrenheit. With miles of hiking, biking or horse riding trails, this is an outdoor paradise.

Parks and Beaches in abundance

Several parks dot the map in the area including Fort Ross, Gualala Point, and Salt Point Park near the ranch. Bowling Ball Beach is about 14 miles north of Gualala and features large round rocks on the beach in rather straight, unnatural patterns. This looked like a worthy place to visit, but alas, I had no time for the trip.

The town of Gualala has a few restaurants and the Surf Market for visitor’s food needs.

I visited Gualala on a sunny, but windy day for a picnic. Fellow travel writer MaryGo, came down from Fort Bragg to join me.

We had a picnic outside the Gualala Point Regional Park’s visitor center then walked the beach. The visitor center is only open Friday through Monday and was closed during my visit. We wandered some of the park’s 195 acres of forest, meadows, and beaches under clear blue sky.

One of the pastimes of park visitors is collecting driftwood and building whimsical structures on the beach.

Several of these were occupied with  lounging or napping visitors on our walk.

I had seen similar structures before in California but never so many or so big. No doubt they would make a great bonfire!

When the photo class was over I packed my car for an early morning departure. It was during that moonlight car-loading a great horned owl flew over me looking for a meal.

In my nature encounters all over the world it would be hard to beat the silent wing beat of the graceful owl. It flew so close to me in the purple night sky, lit up by the full moon, I felt I was in a dream.

I had once again become smitten by the North Sonoma Coast and was already planning my next trip as I drove towards San Francisco at 5:30 in the morning. Once you see this coast, hear the crashing waves, and inhale the salt air, this wild coastal area will have you planning to come back for more. One visit is not enough.