Never Too Old to Travel: Songs of the Baka

After Retirement, this Couple Hit the Road. Their favorite place? Algeria.

Abandoning the comfort and security of a typical retirement, a couple travels through the most isolated parts of the world.

After their retirement, Dennis James and Barbara Grossman decide to travel where tour buses won’t and where the US government says “don’t,” incorporating trekking into their travels as a way to see.

Armed with a passport, an interest in non-Western and indigenous cultures, a spirit for adventure, and a sense of humor, they hike through the forests in the highlands of Papua New Guinea; visit the traditional hunter-gatherer Baka Pygmy community in Cameroon; stay with the cliff-dwelling Dogon people in Mali; explore Roman ruins in Algeria; meet a nervous mother rhino in Nepal; and witness bull-jumping, a coming-of-age ritual for young Hamer men in Ethiopia.

In defiance of typical tourist travel, ignoring State Department warnings, and with a curiosity and hardiness that belies their ages, Dennis and Barbara choose to travel the roads not taken so frequently—to places like Cuba, Iran, Venezuela, and Gaza—seeking the truth behind the headlines and exploring the deeper questions about the local cultures they encounter.

Why do these people cling to the art, sexual mores, economic and political hierarchies, and spiritualities that govern their lives? And how and why do they remain resistant to the pressures of globalization?

A journey into the other sides of the world, Songs of the Baka and Other Discoveries puts aside preconceptions and combines the wisdom of age with the stamina of youth.

Dennis James and Barbara Grossman’s extravagant journeys provide inspiration that traveling should not be defined nor limited by age.

The couples’ stories are crafted with language that makes the reader feel as if they are experiencing life first hand with Dennis and Barbara.

Deciding what destination is going to be your next travel spot can be difficult, and Algeria will most likely not come to mind.

However, when you ask Dennis and Barbara they will say they choose Algeria. “Because it has a beautiful Mediterranean coastline and a lush coastal plan; a countryside studded with the ruins of Roman cities; Arab, Berber, and African cultures; the Great Erg, the Sahara’s sea of sand; the Tuareg-inhabited South; the M’zab culture of the East; and Algiers, with its Casbah, corniche, harbor, seafood, couscous, and French urban design and architecture.” 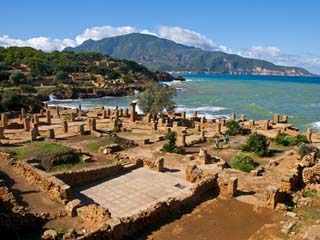 The coastline of Algeria.

The two travelers take a positive and creative approach when deciding to plan a visit to a country  on the State Department Travel Advisory List.

However, without exploring their adventurous side the two authors would have never traveled to Algeria and had a trip of their lifetime.

Aside from Algeria, Dennis and Barbara travel to other exotic locations like Gaza, Ethiopia, and Mali.

The personal stories they share have the ability to open up the minds of hesitant travelers and reassure them that while traveling may take you out of your comfort zone, it is still worth the efforts.

“Algeria is, after all, a repressive police state facing a militant Islamic opposition movement. It is on the State Department Travel Advisory List, and there are almost no foreign tourists.

So why Algeria? Because it has a beautiful Mediterranean coastline and a lush coastal plain; a countryside studded with the ruins of Roman cities; Arab, Berber and the African cultures; the Great Erg, the Sahara’s sea of sand; the Tuareg-inhabited South; the M’zab culture of the East; and Algiers, with its Casbah, corniche, harbor, seafood, couscous, and French urban design and architecture.

And because it has a length and heroic history of resistance to colonization that inspired anti-colonial revolutionary movements throughout the third world.

There are also almost no foreign tourists.

When visiting Algeria, you have to take some chances and be ready to operate our of your comfort zone. Algerian tourism is not ready for prime time, but prime time isn’t ready for Algeria, either.

Friday, October 7, 2011 is a very pleasant day in Brooklyn for our departure, with temperatures in the low seventies. Barbara and I do a light workout and go through the pack list. The cab driver to JFK International Airport is Palestinian, and we engage in a lengthy conversation about Jerusalem, where his family lives, and Gaza, where we visited with a UN- sponsored delegation in 2009.

We arrive at JFK in plenty of time for our 3:40 p.m. flight. The Lufthansa check-in attendant issues boarding passes, then looks at our passports for an inordinate amount of time, her face gradually assuming in expression of concern.

‘Wait a moment. I need to to talk to my supervisor about something,’ she says and walks off with our passports. They include our visas, where we obtained weeks before from the Algerian Embassy in Washington DC. My sense of well- being vanishes and is replaced by the needle-stick oneself of anxiety. Time goes by. When she reappears, her expression is unchanged.”

The book can be found on Amazon:

Songs of the Baka and Other Discoveries: Travels after Sixty-Five