Manchester, England: Basking in the Spotlight 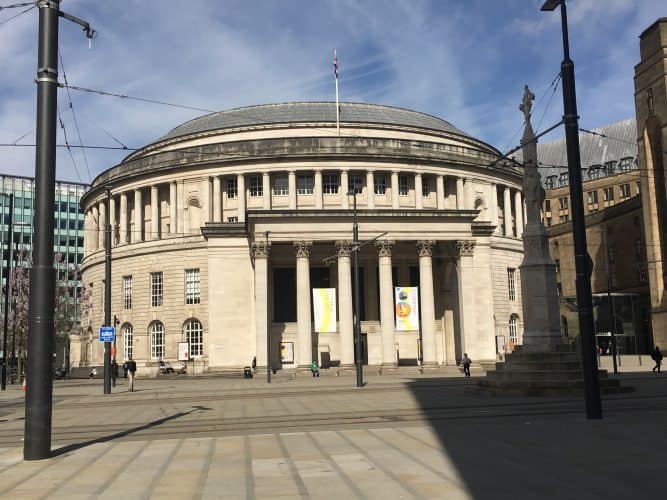 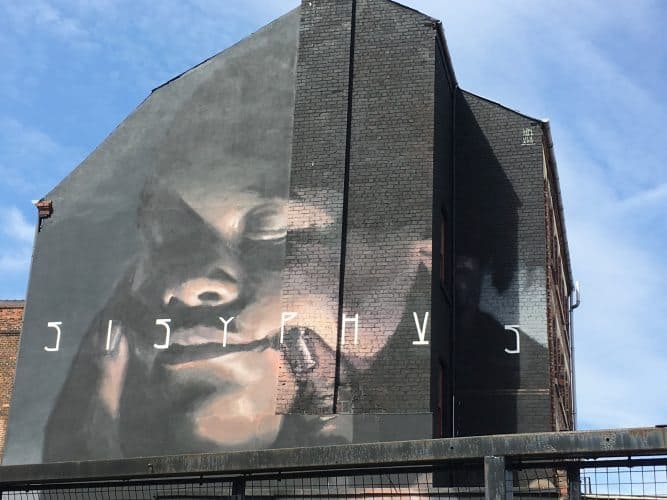 New US Air Routes, new hotels, and attractions shine a light on Manchester

Manchester England is famous for being the center of the industrial revolution, a place where textiles and other products were produced in massive brick factories with belching smokestacks by armies of workers, buzzing like busy bees.

The smoke is gone, and so are most of the factories, but Manchester has become Industrious instead of industrial.   A few years ago, thousands of BBC employees in London moved into their new sprawling headquarters in Salford Quays.  Today, Britain’s most popular and longest running TV show, Coronation Street, is filmed there. 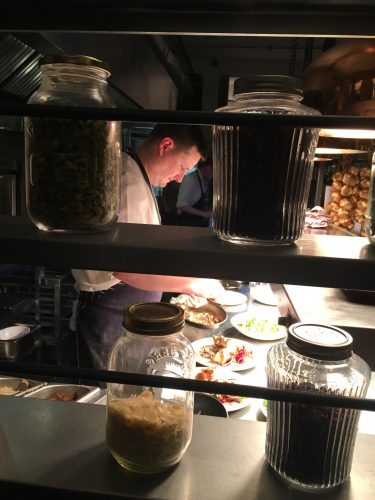 A chef prepares a small plate at Evelyn’s Cafe, a cozy restaurant in the Northern Quarter, filled with music clubs and nightclubs.

When you walk Manchester’s compact city center, you see many symbols of this same busy bee, as it’s been adopted as the symbol of the city.

Today, with construction cranes towering over many projects,  and a booming economy fueled by digital, biotechnology, banking, and education, there is a quick and exciting pace to the place. 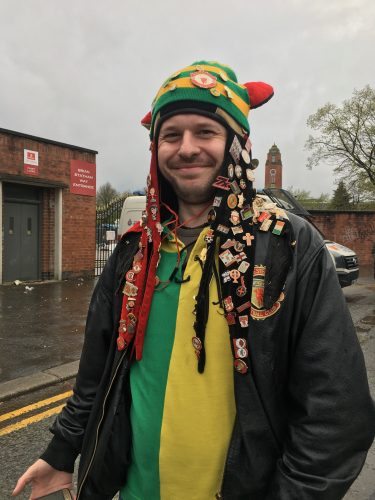 A proud fan of Manchester United leaves a match after a victory over Chelsea at Old Trafford in Manchester.

Manchester’s local sports teams, Manchester United, and Manchester City are two Premier league perennial competitors whose players bring European fans from all over to stay in the city and cheer on the favorites.

Man-U is the most valuable sports team in the world, with fans in dozens of other countries.

A tourism official told me that foreign-born players on either team can bring in literally hundreds of thousands of visits from fans…the teams have a big part in filling up both hotels and the many airliners bound for Manchester from all over Europe and around the world.

You can get here from more than 200 cities around the world, and many people here live car-free, with ample tram service, trains to the airport and two-hour fast trains to London.

There is even a free bus service called Metroshuttle that loops all over the city center on three color-coded routes, making it very easy to get around. 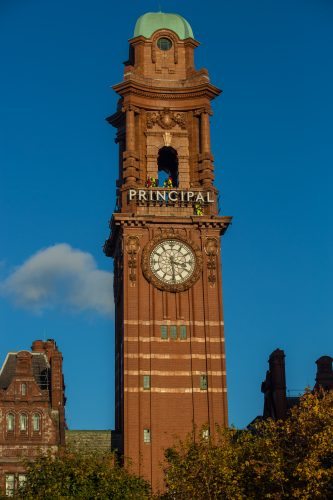 It’s hard to miss the sign on the tower for the recently renovated Principal Hotel Manchester on Oxford Road.

Fans take the Metrolink trams to get to Old Trafford stadium for football and cricket matches, and to Salford Quays, where BBC is located in their state-of-the-art studios.

A City Known for Music

Manchester is known throughout Europe as a music city–great bands like The Smiths, Oasis, Joy Division and the Hollies all started here. There are some great clubs where you can walk in and enjoy a pint without a cover.

Matt and Phreds offers jazz, and Night and Day Cafe has an eclectic assortment of live music, both located in the Northern Quarter. One notable venue is Band on the Wall, where Manchester’s own Mr. Scruff holds legendary five-hour DJ shows, and the bands used to actually play in a little nook up in the wall since the club was so jammed with music fans!  All over the city are other nightclubs and venues, large and small, where comedy, drama and music is enjoyed.

Refuge in the Principal

The recently renovated Principal Manchester Hotel on Oxford Street is a buzzing center of action in the evenings, when Refuge by Volta, the adjacent restaurant opens its big bar and locals mingle with hotel guests enjoying small plates and cocktails.  Built in a renovated former insurance building, its centerpiece is a dramatic tower you can spot from blocks away.

The Refuge by Volta is a 10,000 sq ft space which includes a public bar with a 30ft-long granite bar serving 18 ales on tap; a restaurant with an open kitchen, booths and a private dining room; a winter garden housed inside a glass atrium and serving afternoon tea and cocktails; a large den; and a gallery wall that runs the entire length of the grand room.

Our dinner at The Refuge was small plates, a lot of variety, including ox cheek, cod croquettes, and their own version of lamb shwarma, delicious and not expensive–90 pounds for two with wine. 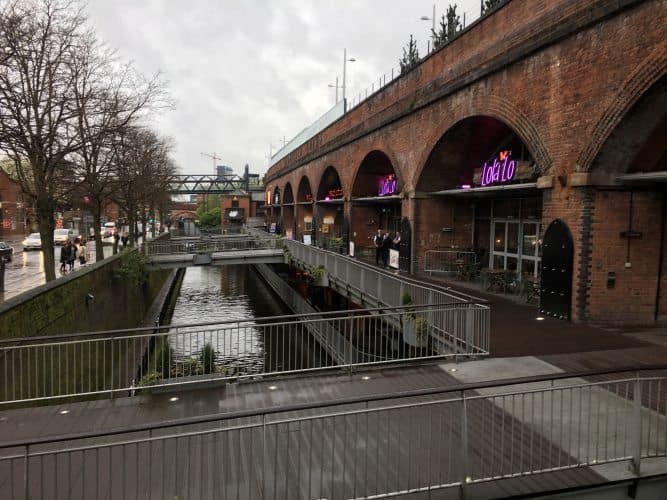 Deansgate Station, where Metrolink trams depart, near the Principal Manchester Hotel. Locks allow boats to traverse the city’s many canals.

Some of the Principal’s rooms ceilings are 20 feet high, which makes even a small room seem enormous.  The oak trimmed rooms have the solid feel of an old, well-built building, and the staff takes great care of its guests. I especially liked the free snacks and fast Wi-Fi in the rooms.

Rooms are not expensive here, nor is most anything you buy compared to what things cost in London.  Their recent renovation was undertaken by the new owners, Starwood Hotels, and their investment is paying off, with high occupancy and a lot of top notch events.

Affordable in Every Way 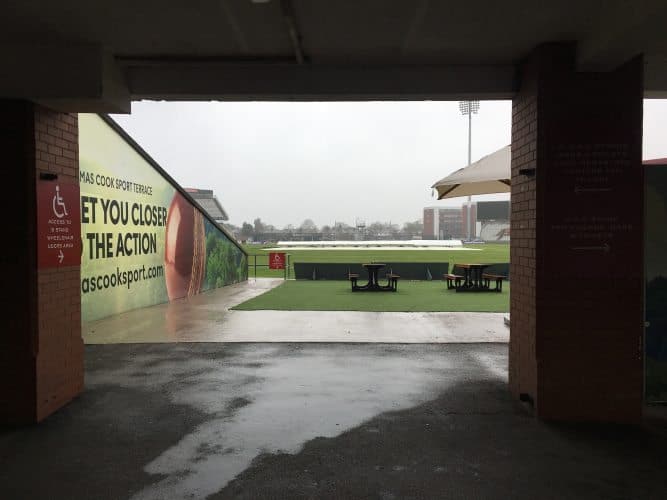 Affordability is part of what convinced thousands of BBC employees to make the move up north–housing, dining, and everything cost less than in Manchester’s big brother, London.

You’re never far from a canal in Manchester. The city was made famous when the canal was constructed spanning 30 miles all the way to Liverpool and the coast, giving the city a vital link to export its cotton and other products to the overseas market.

Today the Manchester canal is still visible around the city and continues to be a vital part of shipping in the city. Today it’s privately owned and containers still are shipped to the Irish Sea via the canal.

There are wonderful day trips out of the city:  I took a short, 20-minute tram ride from Deansgate, in the center of the city to Altrincham, a market town where everyone gathers to shop at the market in its different iterations– from vegetables to crafts, vinyl, vintage, and seafood—every day except Wednesday. 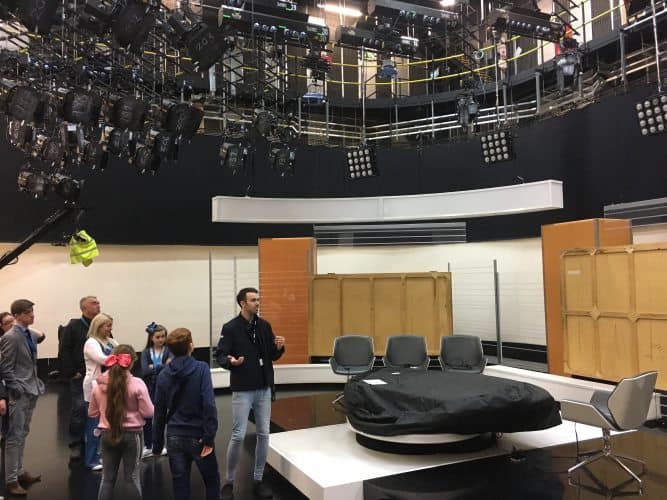 Touring a studio where a sports show is televised at BBC Studios in Salford Quays, Manchester.

(Note to self, next trip, don’t go on Wednesday!  But even though the market was closed, the wonderful communal market house, with big shared communal tables, was neighborly and tasty. I enjoyed a woodfired pizza from Honest Crust and Black Jack Brewery local lager). 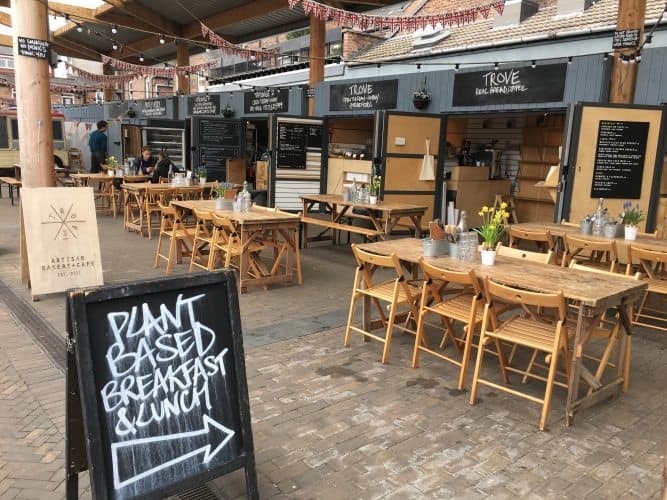 Dining at Altrincham Market, just outside of Manchester.

Altrincham was once known as a ghost town, but this market puts a big smile and brings many customers in to offset the forlorn retail area, with many closed retail stores.

Easy to reach by train from Manchester are other cities like Liverpool, Leeds, and the Roman Cities of Chester, York, and Lancaster.

York I can say is one of the prettiest and most fun towns in England, a popular tourist spot but a walk on the Roman walls around the city should not be missed!  Read more about York.

A tour that both kids and adults enjoy is the two-hour spin through the new BBC studios in Salford Quays. With a staff of more than 3500 employees, there is a tram that takes you right to the entrance, near the Manchester Ship Canal.

With a full roster of television and radio shows produced here, the tour includes the BBC Radio 4 studio and the bigger studio where the England’s most popular football program is taped. 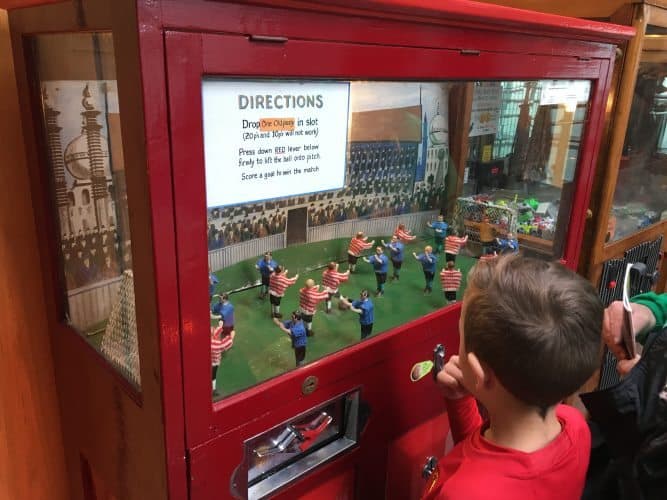 At the end, kids are tapped to play presenters and do a short TV news segment, complete with the weatherman in front of the green screen. It’s quite entertaining and interesting.

Manchester has a sports tradition that’s almost as big as its new National Football Museum, where you can learn just about everything about professional, Olympic and national levels of the game, in a tall museum that was originally built as “Urbis”, it was not popular so it was repurposed into the sports-themed museum of today.

Inside there are exhibitions to famous Manchester teams and the English national team who haven’t won the World Cup since 1966, which is now guided by the sport’s first female manager. 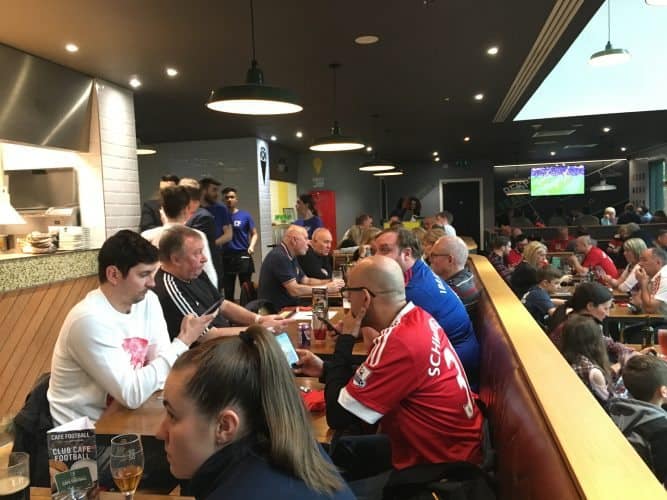 Right across from Old Trafford, the Hotel Football complex is the best place to watch the game.

We enjoyed watching the sold-out Manchester United match against bitter rivals, Chelsea, right across the street from Old Trafford, at the lively and fun Hotel Football.

The place was packed three hours before the match, but as the game began, the place emptied out. They all had tickets to get into Old Trafford.

I was happy to have a little more elbow room and enjoyed their Seven Brothers cask ales and a chicken curry pie as I watched the local team trounce the competition.

Find out more about everything you can see, do and enjoy in Manchester at the Marketing Manchester website.

This trip was sponsored by Marketing Manchester and Virgin Atlantic, but the opinions expressed are the author’s own.