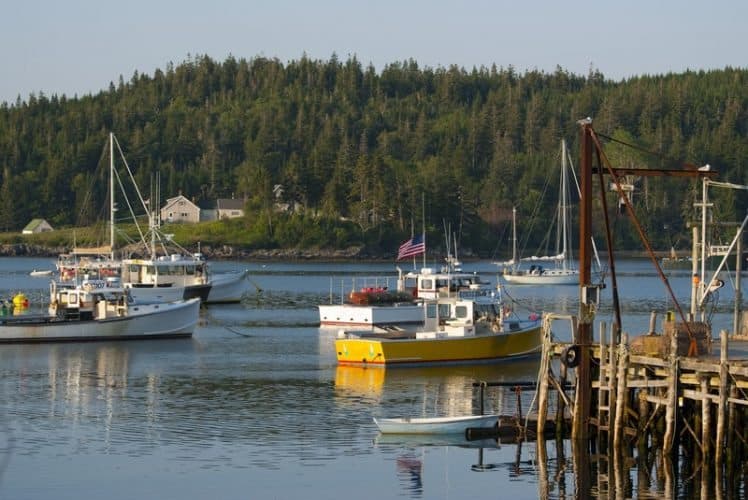 The coast of Maine is full of busy lobster and fishing boats. Cutler Harbor is the northernmost harbor in Maine.

Close-up view of puffins on Machias Seal Island in Maine.

The term Down East (Downeast to Mainers) refers to the coastal region of Acadia National Park, heading north to the easternmost town of Lubec, and then up the St. Croix River by Calais, bordering Canada.

, you’ll find many beautiful places Downeast and in the woods of Northern New England to explore.

Route 1 follows the shoreline in many places and also has its share of roads that branch off to more rural fishing villages and small towns.

Corea is a small fishing village about seven miles from the entrance to Schoodic Peninsula, the only area of Acadia National Park on the mainland. The rocky peninsula gives visitors a real sense of the ocean’s fury.

There are many islands in this region, some which are protected as wildlife refuges part of the year, but many are open to the public for kayaking, canoeing, and hiking. Cruises that offer puffin-watching pass by Petit Manan Light, as it has become one of the sanctuaries of these and other nesting birds.

Milbridge offers seventy-five miles of coastline with spectacular views of the Narraguagus River and the Gulf of Maine. Milbridge was once a shipbuilding town and has a museum of local history.

The Petit Manan National Wildlife Sanctuary is an island less than a half-hour from Milbridge, with its nesting area serving over 300 species of birds. Take a picnic down to McClellan Park and enjoy the ocean views, or stroll along the river through Riverside Park, or go fishing.

The Maine Historic Preservation Commission lists twenty-eight prehistoric archaeological sites along the Addison coastline. You may have an opportunity to visit some of these sites by getting their permission.

Pleasant River Boat Tours provides nature cruises along the Pleasant River Estuary and out to nearby islands, which include views of Nash Island Light. On their puffin cruise, you’ll also view Petit Manan Light and Pond Island Light.

At the Corner of Route 1 and Route 187, you’ll find Wild Blueberry Land, the world’s largest “blueberry” building with a great bakery and organically-grown food at reasonable prices.

You’re in Maine’s true blueberry region and this landmark is a must-stop. There is even a nine-hole mini golf course and all kinds of watery photo ops.

Jonesport is a small fishing village along the heart of the rugged Down East coast. Samuel de Champlain anchored here in the early 1600s while mapping the area for the French King, Henri IV. There is an old quarry dock on Head Harbor Island nearby where you’ll see huge, stacked pink-granite blocks.

The area is full of islands that invite exploration by boat or kayak. Kayak to and hike through the wilderness at Great Wass Island Preserve.

In the scenic area of Machias, check out Jasper Beach in nearby Machiasport with its unique multicolored pebbles. It creates a picturesque coastline, and is often called the “Best Wilderness Beach in the Northeast.” In mid-August, visit the annual Blueberry Festival in Machias, which has become a huge event in this region.

A lobsterman pulls a trap off the coast of Northern Maine.

A few miles away, relax on the white sand beach at Rogue Bluffs State Park or, at nearby Cobscook Bay, a favorite for boaters and sea kayakers. Sunrise Canoe and Kayak gives kayak tours along Machias Bay, along with a whitewater wilderness trip and multi-day kayak and canoe tours along the St. Croix River. Tours of historic downtown Machias are offered during the summer.

Cutler is a classic Down East fishing community. Sail from its picturesque harbor to Machias Seal Island and Grand Manan Island six miles offshore. It still has an active fishing fleet and is the last harbor before entering Canada.

The Cross Island National Refuge consists of six offshore islands ten miles southeast of Machias in Machias Bay. It encompasses 1,700 acres in the town of Cutler and can be explored on your own by boat or kayak. You’ll find all kinds of wildlife, including white-tailed deer, bald eagles, ospreys, and songbirds.

Machias Seal Island Lighthouse is operated by Canadian keepers and is not automated.

They can also set up a charter to land on Little River Island to tour the lighthouse and keeper’s dwelling.

When you take the Bold Coast Charter trip to Machias Seal Island, you’ll find the largest puffin colony on the coast.

It is also the only place where visitors are allowed to step onto the island to view puffins up close.

You’ll also find Machias Seal Island Lighthouse, which is technically a Canadian lighthouse tended by Canadian keepers, the result of a treaty made between the two countries hundreds of years ago.

You get to meet these great folks on the island.

Allan Wood has been a college educator in business, photography, and digital media for many years. He has always had a passion for researching and photographing New England’s lighthouses, has published many images, and lives near New Hampshire’s seacoast with his family.