Helping to Save orphaned joeys with Kangaroo Haven Wildlife Rescue

Kangaroos are a ubiquitous sight around Australia. They proliferate due to limited natural predators and the ample wild spaces of Australia.

Their big nosed, doe-eyed faces are the undisputed brand of Australia, the most famous of the marsupial family, a family that thrives in Australia like nowhere else in the world.

However, despite their lack of natural predators (dingos will only attack the weakest of these large marsupials and snake bites are rare), there is a new threat in town: man and his creations, cars.

Drive at dawn or dusk anywhere outside of major city centers in Australia and you will see sets of startled eyes frozen in your headlights, mid-side of the road munch.

They are worse than the American version, deer in the headlights, and will sometimes continue hopping…straight into the car.

This makes for what I call the morbid math of the Australian outback, one dead kangaroo equals approximately one kilometer driven. They simply do not know how to deal with cars. However, the roos of the Kimberley, a remote section of the northwest of Australia, are in luck; they have a guardian angel, Mandy of Kununurra’s Kangaroo Haven.

As I walk up to Mandy’s small home on the edge of town in Kununurra, Western Australia the first thing I notice is a small kangaroo, a type called a euro, standing guard over the doorway.

She pops her tawny head up from her midday meal of front lawn and looks at me inquisitively, head cocked in the classic confused canine pose. We stare each other down for a moment, then I continue into the modest, three-bedroom home.

Tiny ears poke out of colorful, hand-sewn pouches that hang from the dining room table as Mandy greets me.

“While we’re waiting for the others, you can give the babies a cuddle,” she offers, gesturing to the pouches. I squeal with delight as small heads start to emerge from their cozy homes. I am an animal lover to the extreme and, for me, there is nothing better than playing with fur babies.

There are six heads poking out now, six of the youngest out of the 32 kangaroos and wallabies that Mandy is currently caring for. They have all been rescued from the certain death of their mother’s being killed, some by cars and some by hunting, but they are resting safely now.

A little euro climbs out of her single-occupancy pouch and scrambles into one with two big reds already cuddling. She wiggles her way in until only the tips of her ears are visible above the pouch’s quilted edge. It’s one happy, cuddly ball of legs, tails, and ears.

When the rest of the group shows up, Mandy hands us all a joey (a baby kangaroo) and a bottle. My heart melts as baby Raynee is placed in my arms, a 6-month-old euro whose mother was hit by a car. Little Norris, a 7-month-old wallaby who thinks he’s a big red, goes to my partner, Kane, and I can’t help but get pictures of the absolute adorableness that is currently ensuing.

Once all the babies are happily chugging away at their bottles Mandy begins her story. It all started 15 years ago when Mandy and her partner hit a pregnant kangaroo on their way home from Darwin. She didn’t know what to do, but she couldn’t leave the joey to die, so she wrapped him up in a blanket and took him home.

By working closely with Parks and Wildlife, Mandy learned how to care for the orphaned joeys: what to feed them (they are lactose intolerant and cannot have normal milk), how to raise them, and, eventually, how to successfully release them back into the wild. Thanks to Mandy’s efforts these past 15 years, 620 orphaned kangaroos and wallabies have been raised and re-released.

Raynee spits her bottle out half way through Mandy’s story and I can’t get her to take it back. She scrunches up her little black nose in disgust, a diminutive princess refusing her bottle.

“Is she okay?” I asked, slightly worried. “She won’t eat anymore.” Mandy walks over, opens Raynee’s mouth, inserts the bottle, and covers her eyes. Sure enough, she starts suckling again.

“We get these little guys from all over the Kimberley, some come from as far south as Broome. The thing is, a lot don’t survive the transport. A kangaroo’s pouch is dark, humid, and warm, about 34 degrees Celsius, so when the baby is suddenly ripped out of that and, say put in the air-conditioned cab of a car, they often die of stress.

If you find a joey, make sure to keep it warm, in a blanket or under your shirt, and get it to someone who knows how to raise them as soon as possible. The littlest ones, the ‘pinkies’, almost never survive the journey and even the slightly older ones, the ‘velvets’ who are about the size of your palm, still only have about a 1 in 10 chance of survival.”

With that sad thought, I put little Raynee back in her pouch and head outside with the group to meet the other residents of the Kangaroo Haven.

The yard is fenced off by age group, 8-month olds to 1-year olds in the closest pen, 2-year olds in the second pen, and the long-term boys, those who are too imprinted or disabled to be released, at the farthest end. However, as I let myself into the first pen, I notice the gate of the second pen is wide open.

“Ya, that’s Rosie’s fault,” Mandy says, gesturing to the wide-open pen. “I released her a few years back, but she keeps getting herself pregnant and coming home to raise the baby. It wouldn’t be a problem, but she’s trying to wean the baby so she keeps leaving him here and I can’t get him out.

He’s fully wild and won’t let me touch him. I had to put the 2-year-olds in with the younger crowd until she deals with her baby.” Mandy shakes her head in the frustration of a parent with a boomerang child, “That was her in the front yard actually.”

As we grab bottles for the first yard, one particularly little rambunctious euro bounces over. Steve, as Mandy calls him, loves to eat and demands his bottle by yanking on any part of you he can reach with his tiny front paws. My pants fall victim to Steve’s tugging for a few minutes before he finally succeeds in his bottle quest.

The big boys in here, the 2-year olds who, thanks to Rosie’s slattern-esque ways, would normally be in the second pen, are loving the fact that they get a bottle again and soon everyone is surrounded by pushing noses and scratching paws.

Sunshine, a 2-year-old big red who should have been released three weeks ago, sits like a perfect angle waiting for her bottle. She was released with a group of big reds in the Bungle Bungles of the Northern Territory, but on the day of release, she refused to leave the car. I stoke her velveteen grey fur as she suckles happily from her bottle.

Apparently, some of the roos decide they aren’t ready to be wild yet. I think Sunshine just knows where the living is easy, the food is flowing, and the people are friendly. I’m not sure I’d leave if I was her.

“Babe,” Kane whispers through his teeth in my direction. “We’ve gotta go get dinner on, it’s getting late.”

Reluctantly, I hand Sunshine’s bottle off to Mandy, thank her for the wonderful experience, and follow Kane to the car.

Once we are out of earshot I say, “Good thing they didn’t ask what we were making.”

“Ya,” Kane laughs, “I’m not sure how she’d feel about kangaroo korma*.”

Notes about Eating Kangaroo in Australia:

Kangaroo is a traditional food source for many Australians, indigenous and non-indigenous peoples alike, and the process of kangaroo harvesting in Australia makes it one of the most ethical meats available. All kangaroo meat must be hunted, so the animal lives a completely natural, wild life until shot, unlike the horror of factory farms (the most common production method in the United States for most meat animals).

Of the 48 species of macropods (kangaroos) in Australia, only four can be commercially harvested, including two species of wallabies in Tasmania. Of the 50 million kangaroos in Australia, only 3% is used in the kangaroo industries of meat and leather production. The harvests, which began officially in 1959, are strictly controlled by the government to ensure population levels remain healthy and that the animals are killed as humanely as possible.

All commercially processed kangaroo meat is hunted by licensed professional harvesters who must follow the Federal Governments Code of Practice for the Humane Shooting of Kangaroos and Wallabies for Commercial Purposes. The one exception to this is that of traditional hunting by indigenous peoples. Also, in 2013 a male-only policy was implemented to decrease the number of orphaned joeys; through this, the number of females taken has declined from 30% of the overall to less than 5%.

There are many places to stay in Kununurra, from backpacker hostels to upper-class hotels, but most choose to stay in a caravan park or campsite. This is because most visitors to Kununurra are on a longer road trip around Australia or starting/ending a drive of the Gibb River Road. We stayed at the Ivanhoe Village Caravan Resort for $35 AUD per night for a powered site.

Kununurra has an airport, but it is far more common to drive as Kununurra is the east end of the Gibb River Road. Kununurra is a small, remote town on the north-eastern edge of Western Australia so flights are expensive. If you choose to drive, make sure your vehicle is up for the challenge, as these remote parts of Australia contain many unsealed and rough roads.

Kununurra does not have traditional seasons as most know them, instead, there is a wet and a dry season. The wet is a period of heavy rains and hot, humid weather that lasts from October to April. During the wet, unsealed roads can become unpassable due to flooding and mud. The dry is tourist high season due to the milder (for the area) weather between May and September.

Other Activities in Kununurra

While there is much to do in Kununurra itself (there’s Australia’s oldest rum distillery and beautiful sunset cruises on the Ord River) the main reason people come to Kununurra is the Gibb River Road.

The Gibb is a 660-kilometer-long unsealed road that stretches from Derby, in the west, to Kununurra, in the east. It was originally constructed to assist in cattle trucking in the 1950s. The Gibb River Road is a true outback adventure with zero cell phone reception and only two major fuel stations.

Phone Number: 0438 921 942, please call ahead to schedule your visit with Mandy and her babies

Cost: $10 suggested donation per person to help with the costs of raising the joeys. 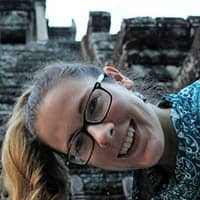 Originally from California, Monica Puccetti has gotten lost in 35 countries, writes about her adventures on her website, www.whichwayswest.com, and is currently counting kangaroos somewhere in the outback of Western Australia. When not traveling, Monica is working on her Master’s in Public Health with Portland State University and running the forested trails of Portland, Oregon.