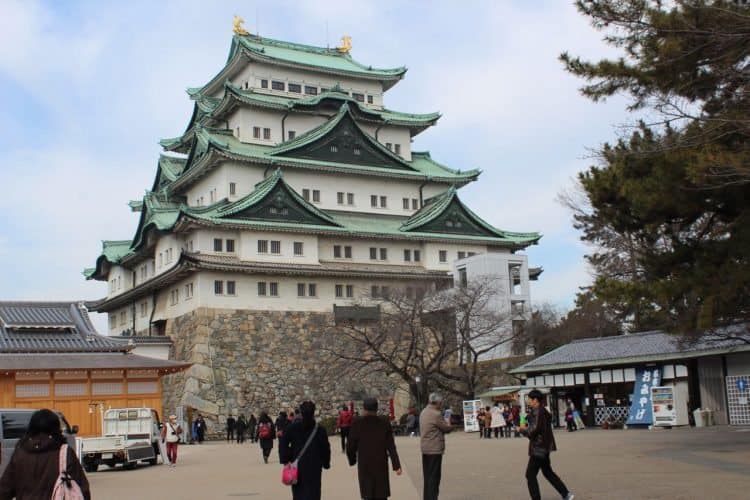 The Best Way to See Japan is with a Railpass

“Tell me you remembered the rail passes.” My wife said as we were about to catch our flight to Japan.

I’ll never forget her question or the feeling of horror that swept over me. I had indeed forgotten the coveted JR Lines Japan Rail Pass.

The JR Lines rail pass is a screaming good deal and has many great attributes. Replacing the pass is not one of those attributes. The pass is sold only outside of Japan and even if you were the US Ambassador to Japan I doubt you could replace this pass in Japan.

This coveted pass will take you around Japan at a fraction of the cost of single tickets purchased Japan. The pass comes in 7, 14, and 21 day options costing a mere $230 or so depending on exchange rates at the time of purchase. 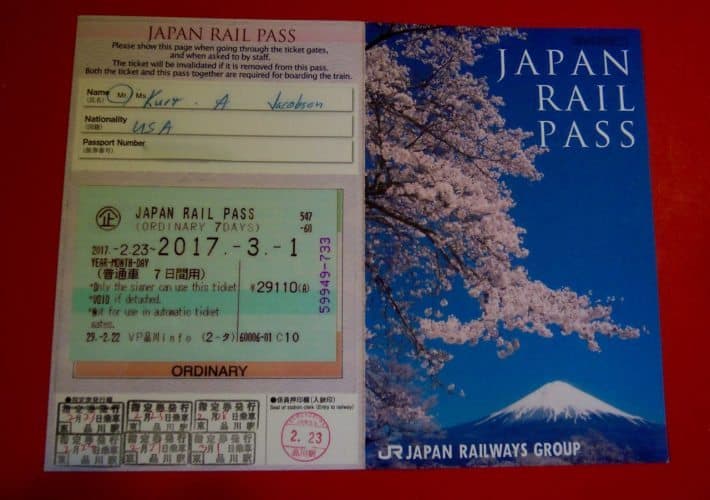 To save our asses and passes we managed to have our rail passes shipped overnight FedEx by our pet sitter and received them just in time to tour Japan in style.

Although it was off to a frightening start, this trip turned out to be one of the best ever.

Our first two days were spent in Tokyo getting ready for seven days of rail travel. Day one of our rail journey was to take my wife and I plus her parents to Hakodate.

To get there we took the high-speed option, the Shinkansen, and even at speeds of up to 200 mph the journey took four hours.

Pulling out of Tokyo the city scene was a blur until some forty minutes later rice paddies, farms, and small towns came into view. Unlike the Shinkansen routes south of Tokyo we didn’t pass many oncoming trains. In the Shinkansen you know when an oncoming train passes by as it hits your train with a wall of air traveling at about 250 mph resulting in a “whomp” you feel and hear. 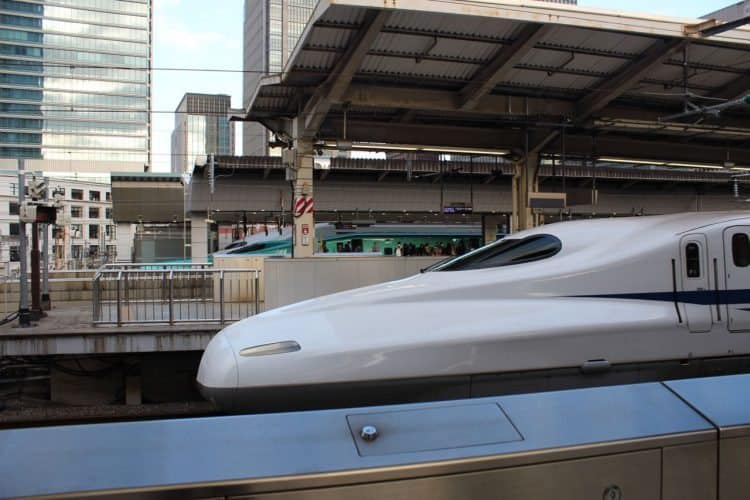 The Bullet trains are the stars of the Japanese railway system, and the country’s great pride.

The northern route to the island of Hokkaido is relatively new since opening March 2016.

This route takes riders under the Sea of Japan for just over thirty-three miles through the Seikan Tunnel just before arriving in Shin-Hakodate station.

It took a staggering 2,900 tons of explosives and twenty-four years to construct the Seikan tunnel.

Before the Shinkansen service came, the slow-train took some eleven hours to get to Hakodate from Tokyo! 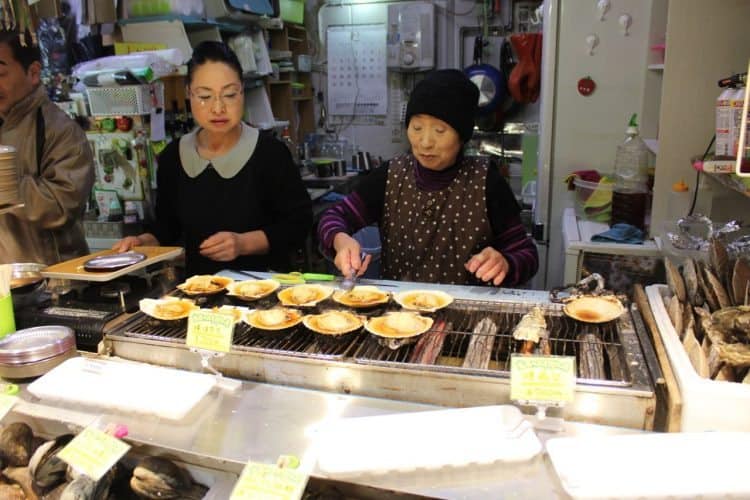 Hakodate is different from just about any city in Japan I’ve been to. This is the most “working class-blue collar” town I’ve seen in my nine trips to Japan.

It’s so different I even saw dented and scratched cars, something you will almost never see in the rest of Japan’s cities. Hakodate is a fishing town and needs no flash and neon to attract me.

I went for the seafood and wasn’t disappointed. Next to the train station downtown is the Morning Market where seafood so fresh much of it is still alive.

One of the first things I saw was a tank with live squid swimming around.

Further along in my market exploration I found live king crab and scallops. Several stalls offered these scallops grilled on the half shell with a touch of sauce. 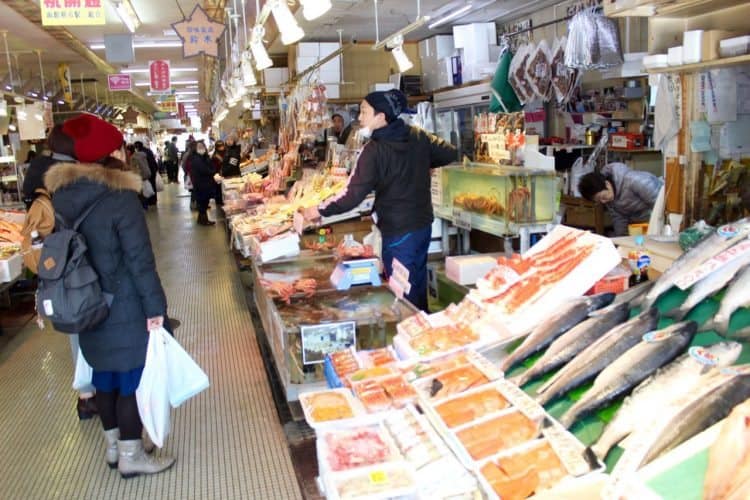 I had to have one and it was the best scallop I’ve ever tasted. The hot scallop was perfect for the chilly market and even though it was 9 a.m. I didn’t mind having scallop for breakfast.

Our next leg of the journey took us to Tokyo for a night of rest before heading to Kanazawa. I was eager to explore the Kanazawa region more after last year’s trip only teased me with what Kanazawa had to offer.

Once again the mighty Shinkansen was our method of travel and took only two and a half hours to get there.

The Chinese have discovered Japan

Just after arrival in Kanazawa we purchased bus tickets to see the historic mountain town of Shirakawa. This world heritage site features grass-roofed houses with an A-frame design for shedding the heavy snows of the high country. After passing through what seemed like dozens of highway tunnels we arrived in Shirakawa 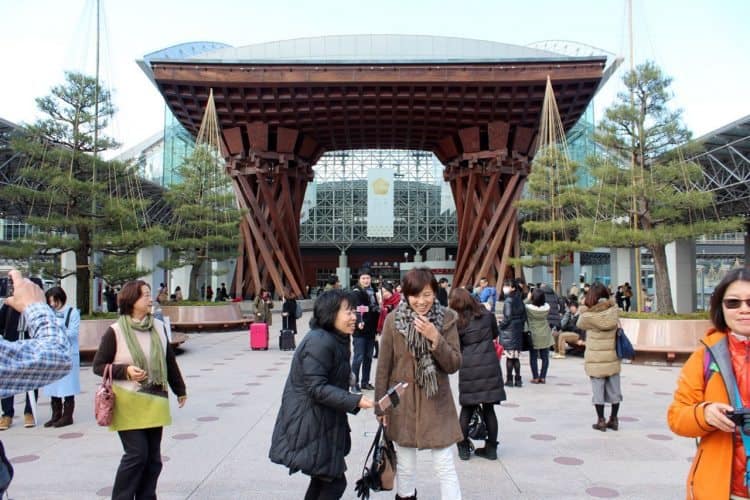 We were outnumbered by Chinese tourists taking selfies at every corner of this tiny town. The sky was blue and the ground white with the winter’s snow. 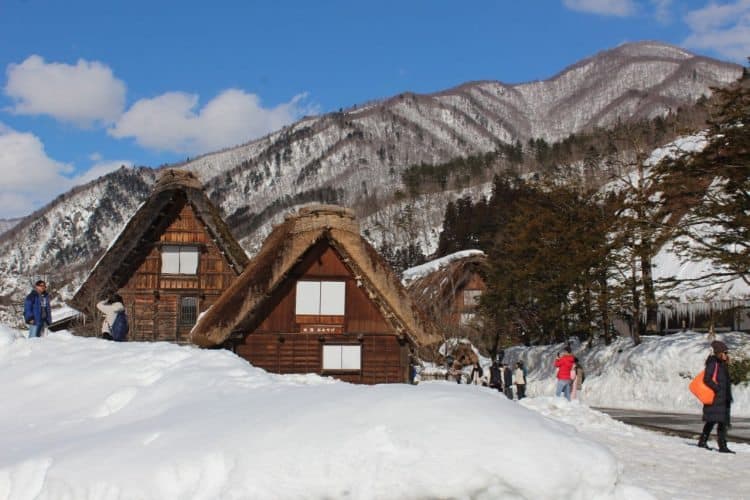 As we walked along I saw several of the Chinese tourists staring down at a drainage culvert and had to see what the fuss was.

After two hours in town we had enough site-seeing and caught the next bus back to Kanazawa.  We were meeting our friend Koji-san for what promised to be a special meal.

Koji-san did all the food ordering that night at Hana Momoji. We started with marinated sea cucumber, then moved on to spicy fried local shrimp in their shells.

Next was a seafood and daikon soup followed by a gorgeous platter of local sashimi to die for! 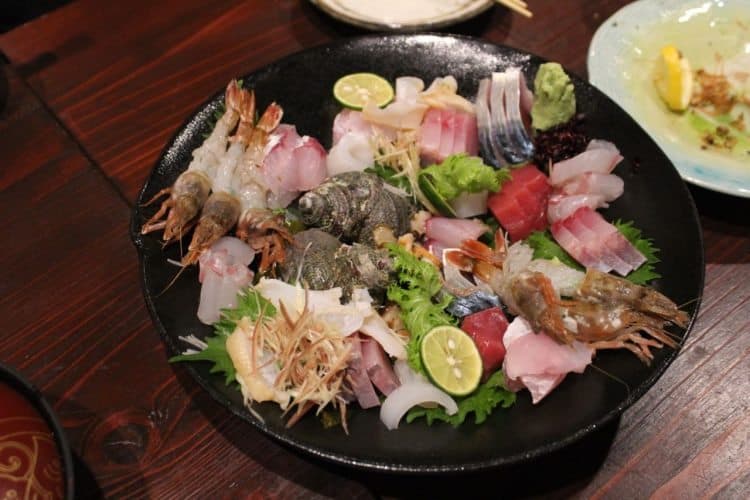 Next was a grilled fresh bamboo shoot followed by yet another amazing salad. This salad had sashimi and smoked fish in it as well as avocado!

By now the beer and sake were flowing and just when I thought it couldn’t get any better a baked-stuffed clam came out. It was not only beautiful and delicious, but also not too big.

I was filling up and thought there was no more room when the chef’s paella took center stage. Full of shrimp, mussels, squid and veggies it had me swooning in foodie ecstasy. It was one of the best meals ever! 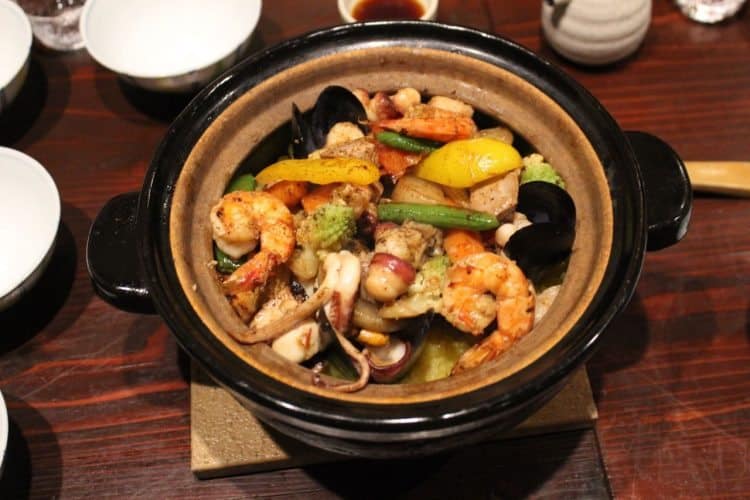 We had the next day for nothing but exploring Kanazawa. With our Kanazawa City Cultural Facilities pass in hand we had access to sixteen attractions for a mere 510 Yen/ $4.50.

There was no way we could see all in a day and focused on the phonograph museum, and poet Izumi Kyoka’s museum.

Many locals do speak English

Though not included with the pass we had to see Fukumitsuya sake. This sake brewery has been in business for 393 years.

One of the biggest surprises was one of the staff at Fukmitsuya spoke English well and with an Aussie accent!

When I asked her about her Aussie accent she said “I lived in Australia for four years and learned to speak English there.” It’s rare on my travels outside of Tokyo to find someone speaking English so well. 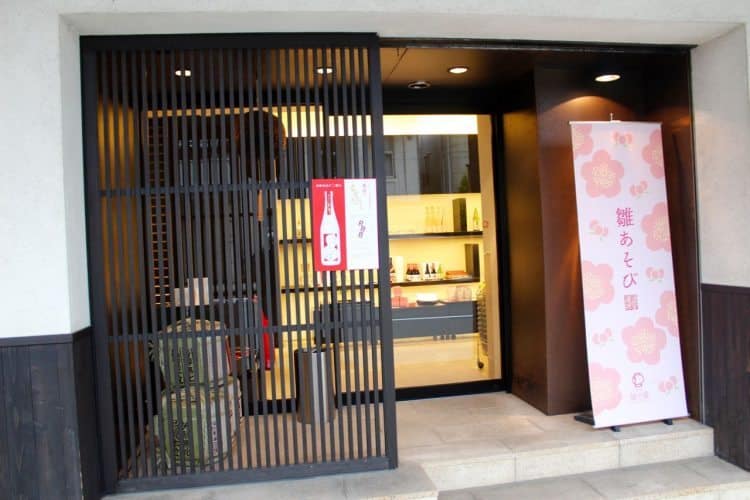 Before leaving Kanazawa we went to Yamoto soy sauce factory, a make-your-own lacquerware shop, had another amazing lunch at Fukuwauchi noodles, and topped it off with the best sushi ever at Tobi. 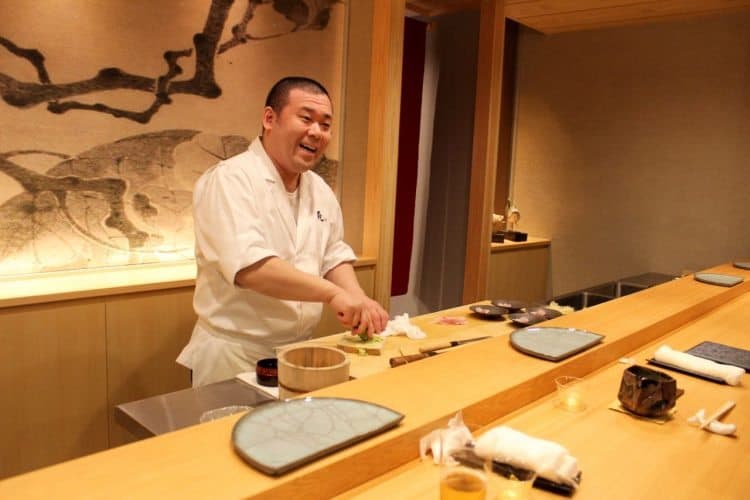 Last year we had this sushi master’s fare at Hotel Nikko. Now chef Tobichi has his own restaurant hidden in a back alley seating only seven lucky diners. It was the best sushi I have ever had.

Leaving Kanazwa is sad, but more adventures awaited us in Gero, and Nagoya. In Gero we stayed at one of the best, and most popular onsen (hot springs) towns  in Japan. High up on the mountain was our hotel, Yunoshimakan. This old resort hotel still has one of the best hot springs pools with a view for weary travelers.

The food was excellent and visitors can choose the option where dinner is served in the room.

This multi-course dinner was part theater and part gourmet feast. Our server, a young man of about 18, took great care in setting the table and delivering several courses of traditional foods. Topped off with a bottle of wine it was a feast. 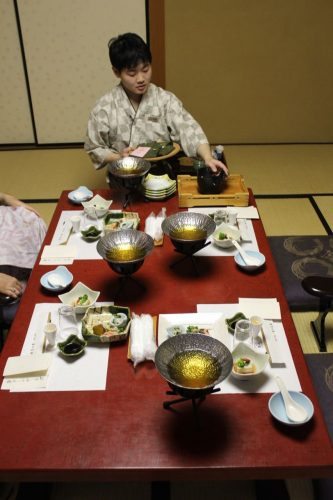 Out in the woods

The next day we had time to walk the mountain trails above the resort. It was quiet enough to hear a a pin drop. When our hostess showed us to our room she told us, “Be careful if you go outside for a walk.

There are wild boar and bears in the forest.”

That was all I needed to want to go for a hike and see some wildlife. All we saw were a few little tweety birds. The bears and boars must have had better things to do.

Our last stop on the rail journey was Nagoya. We planned to visit the castle and check out the local food scene.

We had planned on going to the Toyota plant for a tour but nixed it when we found out it would take a train ride involving two train changes and an hour just to get there.

The castle was just a five minute taxi ride away making it an easy trip. The Nagoya Castle is a remake of the old one that was destroyed by bombing in World War ll.

The new castle was constructed in 1959 of steel reinforced concrete, but still retains a classic Japanese castle look.

We spent an hour and a half which was enough to see the castle.

While strolling the castle grounds I heard a thundering above and looked up to see three C-130 aircraft flying in formation. It sounded like we were back in 1945 when the bombers attacked but these were non-armed aircraft. Freaky! 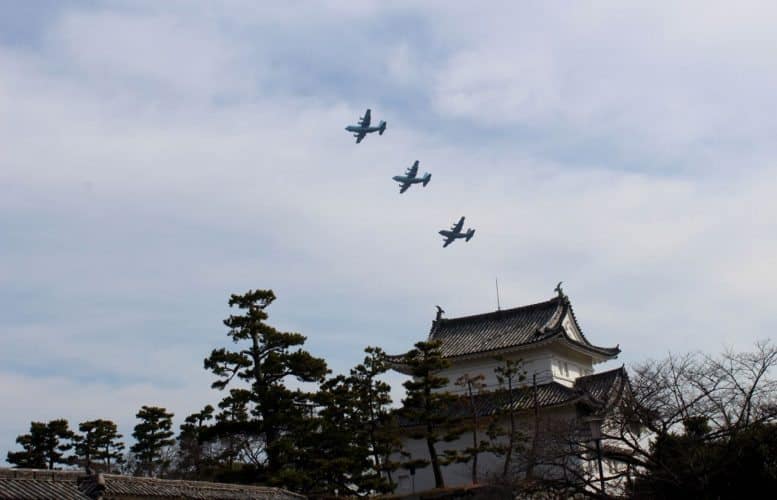 Nagoya is a modern city similar to Tokyo or Kobe, but smaller. We stayed at the Hotel Trusty for a mere $85 per night and it was surprisingly spacious.

We could walk to over a hundred restaurants in just a few blocks. The giant Mitsukosi department store was just ten minutes walk away and a great place to get lunch and souvenirs.

One full day in Nagoya was enough and we hopped the Shinkansen for the trip back to Tokyo. Our JR Lines Rail Pass was all used up and we got our money’s worth.

Next time I’ll upgrade to the green car option and see if it’s worth the extra $80. One thing’s for sure, the rail pass is a bargain and the best way to see Japan.