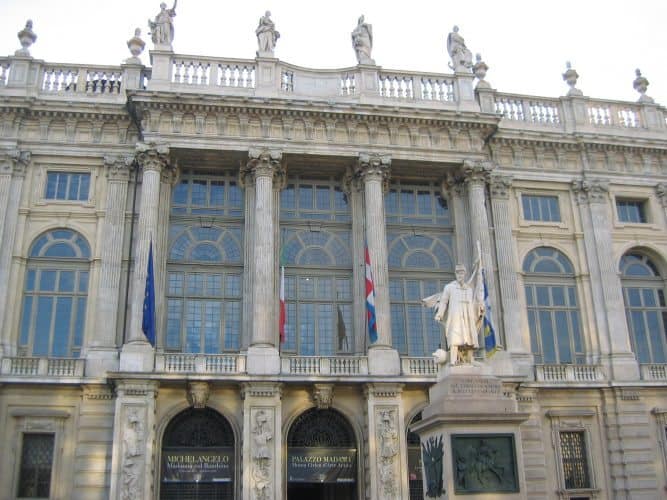 Palazzo Madama, a palace with a double personality, soon captures attention: its sumptuous facade looks totally different from the structure of the medieval castle behind. Marianna More photos.

Our city guide suddenly interrupts her explanation. She glances in the air, then lowers the eyes to the tip of her toes.

“Wait. Can you feel it? It’s the föhn!” she utters triumphally. Of course, I can feel it: a warm and dry wind that caresses my cheeks, so unusual in this cold, wintry season. 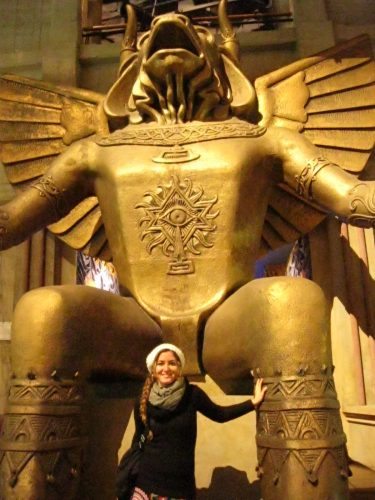 A temperate breeze descending from the Alps, the föhn is just one of the numerous surprises that Turin, or Torino, the capital city of Piedmont, has to offer. One really needs to wait a moment and breathe the air of its intense blue, early December skies.

The sun is bright, the colors vibrant and the neat vision of the monumental surroundings may give the impression of a stunning magnificence. Enlightened by a sunny day, Piazza Castello shows its treasures through the perspective of a very wide square.

A palace with a double personality

Palazzo Madama, a palace with a double personality, soon captures attention: its sumptuous facade looks totally different from the structure of the medieval castle behind. This unexpected duplicity is the visible trace of an historical past: Palazzo Madama was, in fact, a fortress and a royal residence. Nonetheless, its soul is surprisingly neither Baroque nor medieval, as it was built on ancient Roman gates.

Characterized by angular towers and ample front windows, this astonishing building became the royal palace of Maria Cristina, the madama of the Savoy, kings of Piedmont and of Italy. The architect Filippo Juvarra designed it in 1721 and the place nowadays houses the Civic Museum of Ancient Art. 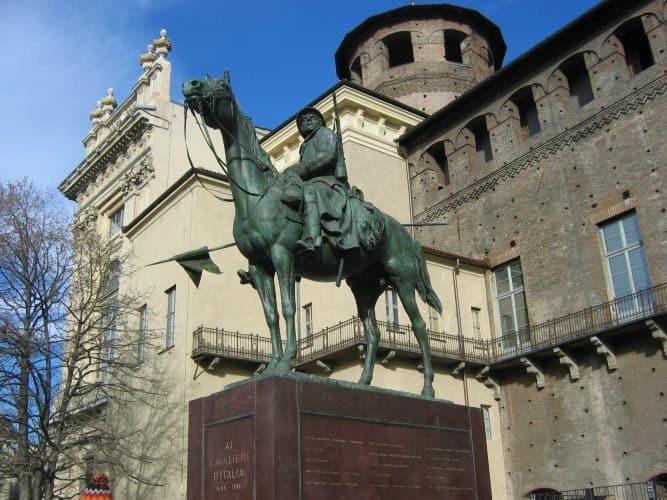 The side view of Pallazzo Madama in Turin.

The peculiar duplicity of Palazzo Madama has a curious and ecstatic admirer: a black statue of Ramses II, sitting with a hand on his lap and another holding a scepter. A replica of a famous sculpture, it reminds us that Turin is home to the most important Egyptian museum after the one of Cairo.

A church with no facade

But there are some good reasons to avoid the call of Egyptian antiques for the moment: the church of San Lorenzo, built by architect Guarino Guarini, has a complex structure, polychrome marbles and a very peculiar Baroque cupola, which rises like the last layer of a wedding cake.

Quite strangely, it lacks a facade, since its front has the appearance of an apartment building and not the one of a temple. The reason for this absence is based on the assumption that a more complex architecture would have altered the uniformity of the square. 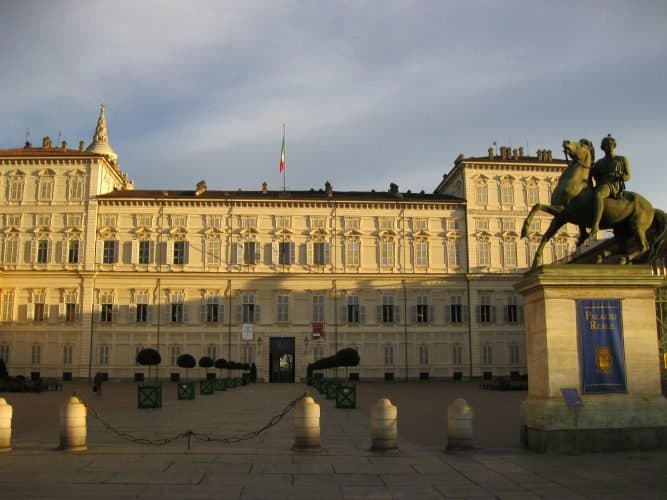 It dates back to the Renaissance and it is mostly famous for the Chapel of the Holy Shroud, designed by Guarino Guarini. The chapel houses what is believed to be no less than the burial shroud of Jesus Christ: a linen cloth bearing the image of a man.

Neither formally endorsed, nor rejected by the Catholic Church, the cloth has been intensely analyzed by scholars and academics from all over the world. Unfortunately, it is displayed to the public only on rare occasions, but informative boards and pictures on site allow the visitors to discover its story and the numerous investigations conducted on it.

A Staircase with a strange emblem

Leaving us wondering about theories, our guide leads us back to Piazza Castello, where the Royal Palace of the Savoy is waiting to strike at the heart each new wave of tourists. Beyond a golden and bronze gate with two rampant horses, the Palazzo Reale appears in its severe, but elegant design.

While we walk through the rooms, we admire paneled ceilings, rich tapestries, Chinese and Japanese porcelains and a collection of Royal arms from the 16th and 17th century.

A staircase by Filippo Juvarra is however what leaves us speechless. Embroidered with white stucco decorations, a central flight of steps, then divided in two, it gives the illusion of a suspended arch and of a great lightness in a very limited space.

In one oval on the staircase, the emblem of a pair of scissors, cutting the tongue of a smirking face, is the proud demonstration of this hard project. It is in fact said that Juvarra included this emblem to criticize his detractors, who would not believe he could accomplish this architectural feat.

Egyptian antiques under a starry night

The call of Egyptian antiques resounds again in our ears and we finally lead to the famous Museo Egizio. It hosts a collection of remarkable statues, mummies, coffins, papyruses and items that highlighten the different aspects of Egyptian life. The museum has been recently restored and visiting its gallery of stone marvels, artificially enlightened like under a starry night, give us a taste of greatness and mystery.

Not far away, Piazza San Carlo, a broad and elegant square opens her arms in the shape of long, colonnaded buildings, to remind us that Turin is also the town of porticoes. Built by the Savoy family and indispensable in case of rain, they reach a total length of 18 Kilometers. But the square has in store one more surprise: a couple of twin churches. Santa Cristina and San Carlo are not exactly the same, but they copied each other during the ages, like two tireless competitors.

Another, very interesting institution in Turin is the National Museum of the Italian Risorgimento, housed in Palazzo Carignano. Weapons, flags, uniforms and documents dating from the time of the Kingdom Italy are to be seen in its rooms. Many historical events took place in the palace, where it is possible to visit two parliamentary chambers, one of which is still furnished as it was in 1860.

Having regained our trust in the Italian Republic and its figures of utmost integrity, we decide nonetheless to enter the Baratti & Milano, an historically monarchic coffee bar.

Beloved by the king and his family, it is decorated with wooden panels, mirrors, stained glass, marble and bronze and its counter is populated by huge vases filled with colorful sweets and with a local delicacy: gianduiotti.

Named after a Carnival mask, they are little chocolate bars in a golden tinfoil cover. At Baratti & Milano and in other coffee shops, you can also have a sip of the typical bicerin: a mixture of coffee and chocolate, which we drank with pleasure in an atmosphere of older times. 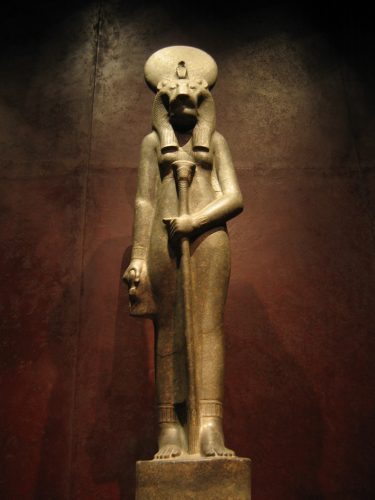 One of the many treasures in Turin’s Egyptian museum.

Our stroll in the center of Turin ends with one last, iconic monument and a symbol of the town: the Mole Antonelliana. Its huge dome, initially designed to be a synagog, is 167.5 meters high and houses the Museo Nazionale del Cinema, an Italian motion pictures museum. Magic lanterns, posters, and stage items lead us finally to another world, far from Turin, very far from reality.

Outside the museum, the föhn is still dancing and whispering: it dispels the clouds, it curls on Palazzo Madama, it descends over the gate of the Royal Palace and it blows between the twin churches in Piazza San Carlo. We will feel it again, warm and unpredictable, while admiring a striking panorama, from the top of the towering Mole.

How to get to Turin:

Marianna Morè’s  articles were published in the Italian edition of Christophorus, by GoNOMAD.com and by a local newspaper. She is a windsurfer, a scuba-diver and an avid reader. She traveled a lot throughout Europe since she was a child, and owes her passion for art, history, and culture to my parents. Read her blog https://shapeofclouds.wordpress.com/