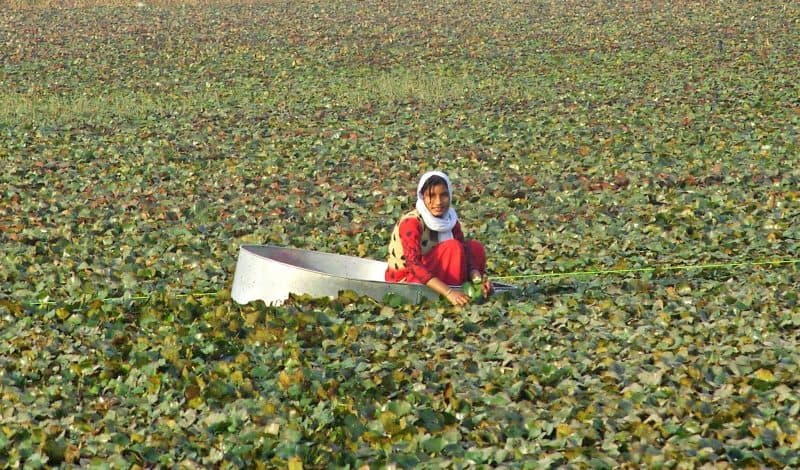 A floating farmer in India in a Joria, a floating boat used to harvest water chestnuts.

The temporary insanity of Delhi, India—and the break you’ll need from it 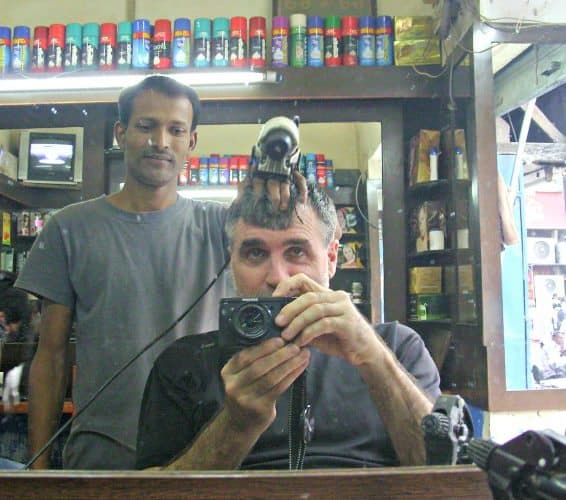 At the Punjab Hair salon in New Delhi, India.

Imagine New York City’s omnipresent squirrels weighing nearly a ton, all roaming or reclining in the center lanes of every street while overdosing on Xanax, thus remaining unfazed by anything happening around them.

Then add more than a billion horn-hooked drivers jumbling cars, trucks, buses, and bull-drawn carts into a lawless traffic circus.

Urban American street-walkers arrive with an edge managing urban India’s mayhem, but not much of one. My last visit here was 25 years ago, way before the cell phone trance added stupidity to the stew. Spice in strolling texters and gamers—sidewalks are rare in India—to this mayhem and you’re going to eventually need a vacation from your vacation.

While shopping for a trim in Delhi’s Paharganj Bazaar, I was quoted 50 rupees (75 cents) in a dank back-alley barber shop. A thousand steps later, I was sold on an 80-rupee pitch made by Mohammed Arkan, who stood in front of his open-front workplace.

After an expert, no-gadgets cut, he swayed me into an Ayurvedic face massage that soon tumbled into a faint-inducing vibrator-assisted head rub.

Thanks to the drab hairdresser cell, which was somehow transformed into a spa, I had achieved temporary health and wellness in India. The head massage left me drowsy and in no mood to contest my final bill, which had ballooned to under $4.

Mohammed, a Muslim, is an 18-year employee at the Hindi-owned Punjab Hair Salon (storefront sign also boasts: Since 1947—The Evolution). After my triad healing ritual, two street kids wandered in for a photo op.

I lingered inside the dingy barber shop for another hour, discussing taboos (faith, policymaking, Chinese tourists) with the multilingual Hindi owner who reminded me that 15 percent of India’s 1.3 billion people are Muslim: 200 million live alongside their Hindi neighbors.

This hairdo-led overhaul served as a lesson in organic blue-collar harmony. Our mind is the strongest muscle in our body. 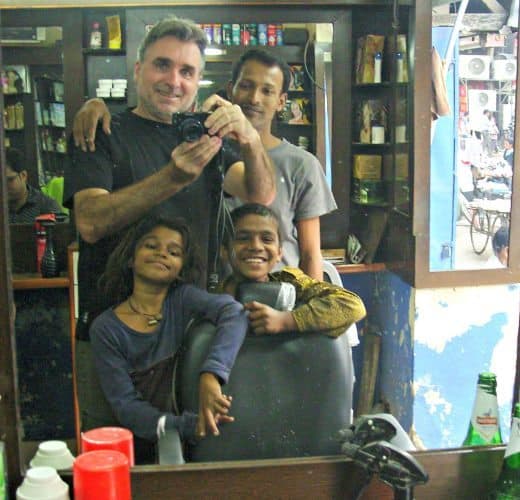 Kids join in the photo at the Punjab salon in New Delhi, India.

The barber-shop healing left me hungry. I gorged on Old Delhi street food without any belly-distress incidents, including an under-the-stars streetcorner feast of two samosas in a bowl of chickpeas blended with potatoes for 35-cents.

Set atop the samosa cart, a battered old radio chimed a spiritual soundtrack into the tinted night air. Delhi is a schizophrenic hallucination of ultra-wealthy and desperately poor existing side-by-side—except it’s not an illusion.

Flip the coin and in minutes I’m inside the Le Meridian New Delhi, where the artsy lobby showcases 25-stories of colorful, hanging plant-life and is a beacon for international executive types hunting swank cocktails

A Walking Tour of Delhi

Back out on the buzzing streets the next morning, I embarked on Masterji Kee Haveli’s enlightening Old Delhi walking tour, where, in a swirl of learning wonderful factoids, I’m also told that current Prime Minister Modi’s father was a train station tea maker.

Even if you don’t like organized walking tours, you’ll love this one. The guide stroll also invited me to realize that Delhi remains past perfect while embracing a digital future. Come let this hallowed cityscape blow your mind blown. 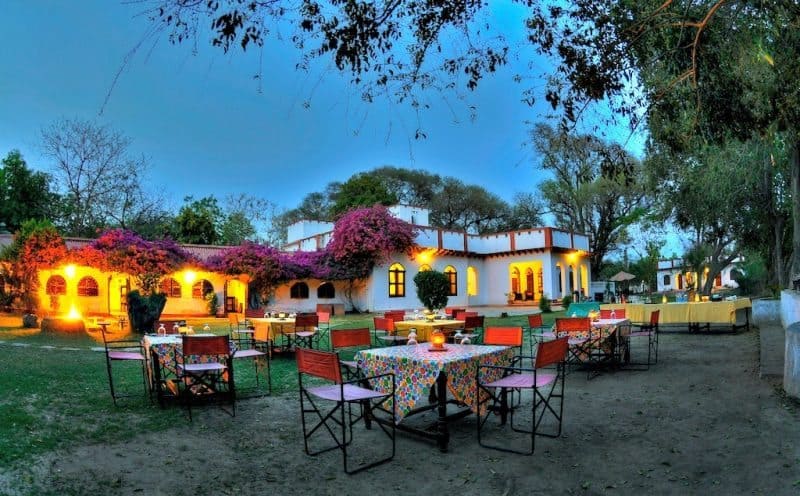 The Vacation from Your Vacation

Five hours drive eastbound from Delhi and half the distance to Varanasi, I stepped back in time for an Indian reprieve of a bygone era. “Gin and tonic, sir?” asked Bachchu, one of the naturalists at the Chambal Safari Lodge.

This royal-style getaway merges down-to-earth estate luxury with a dozen off-campus nature and cultural day trip safaris that draw you into authentic India.

At dawn, Bachchu and our driver left Chambal’s bird-driven chorus for an excursion on the Chambal River. En route we crisscrossed through seasonal millet farms at harvest time (it looks like cattails) on a single-lane tour through flat farmland dotted with tiny villages where women milked cows, holy-man babas roamed, dogs napped, and wide-eyed kids stared in amazement, as this patch of the state of Uttar Pradesh is not on the tourist trail.

Slow cruise on the Chambal River.

A slow cruise in a simple open-air boat along the Chambal River is a bird lovers bliss as there’s an abundance of white-wag brown tails, peacocks, Indian pond heron, gray heron, and red-waddle lapwing. 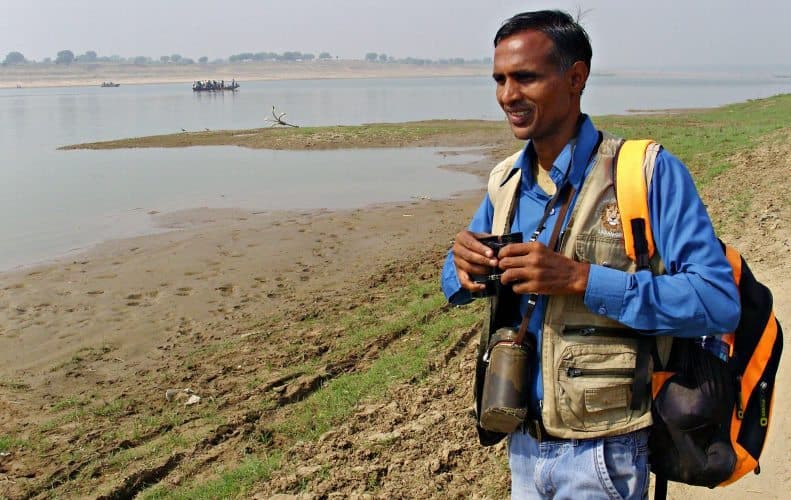 In addition, Ganges dolphins—the cheetah of the river—leap above waterline every few minutes. These blind dolphins who live up to 38 years use sonar to navigate.

We saw no other boats or people during our hours-long cruise. As proud riverkeeper, Bachchu celebrated the hovering and diving pied kingfishers it underlined this region’s stark contrast to other parts of India.

In the midst of our on-water tea and picnic stop, Bachchu began mimicking and communicating with cliffside-nesting bonelis hawk eagles, which reminded me of another bird whisperer, my father. Dad used to cup both hands to make a whistle and make an incredible variety of bird calls that roused many Adirondack mountain wildlife conversations.

Momentarily transplanted back into the heartbreaking dilemma of his worsening dementia, a wave of sadness rushed over me. That’s when Bachchu explained that tikka means okay or got it, and ram ram is a respectful way of saying hello.

He then greeted a black drango ‘jungle inspector bird,’ a river-sipping water buffalo, and a painted stork. Then Bachchu pointed down into the sand identifying jungle cat paw prints. I was back in India. 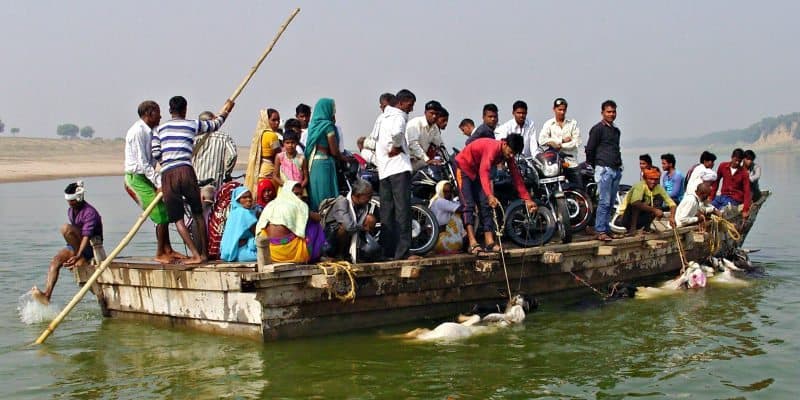 This state line ferry crossing includes swimming cows destined for a cattle fair near the banks of India’s Chambal River, the border between Uttar Pradesh and Madhya Pradesh

The Chambal River Sanctuary, granted in 1979, prohibits housing and industry on miles-wide swathes on both riversides to help revive Gharial Crocodile populations and inevitably all other creatures.

It’s an absolute reprieve from the subcontinent’s incessant bustle. On the drive back to the lodge, millet dust hung in the air. I saw a camel caravan carrying construction sand, but no people or settlements until returning to the lodge.

The lodge grounds double as an arboretum. It has 13 plush rooms, five colonial and eight homegrown safari style. The main house, built 1865 as the estate of a hereditary chieftain, is also a familial museum with globes and maps from the mid-1700s. 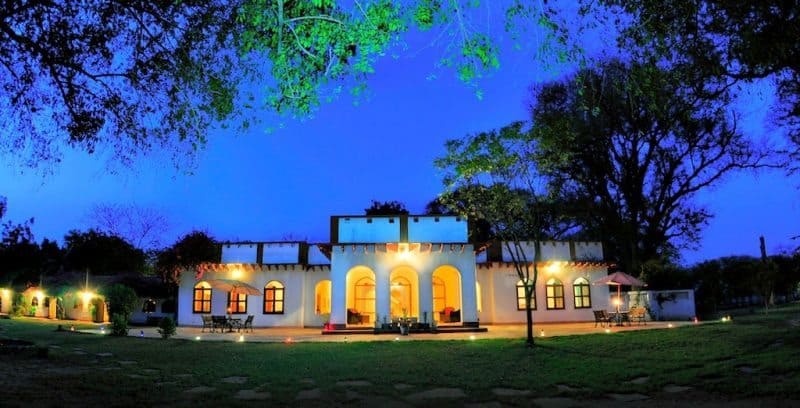 The exterior of Chambal safari lodge in Utter Pradesh, India.

Chambal’s 35-acre campus uses winding slate paths to connect buildings, including the dining room, a renovated stable with thick walls that recall its era as an animal stable.

The royal treatment continues while you’re in dining mode, as the chef greets each table to explain the always evolving menu, which includes Indian classics as well as specials like Singhara Methi Masala (just dig in).

This is also where the birds are. The lodge’s grounds is home to an annual bird festival that draws an international crowd. The estate also includes a stocked fish pond. My safari room was beneath a 200-year-old tamarind tree that was colonized by an army of inverted vegetarian fruit bats with two-foot wingspans.

The onsite Indian Scoups owl pairs are a bit more romantic than the bats. Lunch is typically served outdoors. Mine began with tomato shorba and fried spinach leaves; under the watchful always-peripheral quality control team.

Although very homey and super casual, this place also has a country club vibe. While waving goodbye to television and dependable wi-fi, other day safaris await, including the village of Holipra Heritage walk, which has buildings dating to 1551, and Bateshwar’s 101 river’s edge temples. 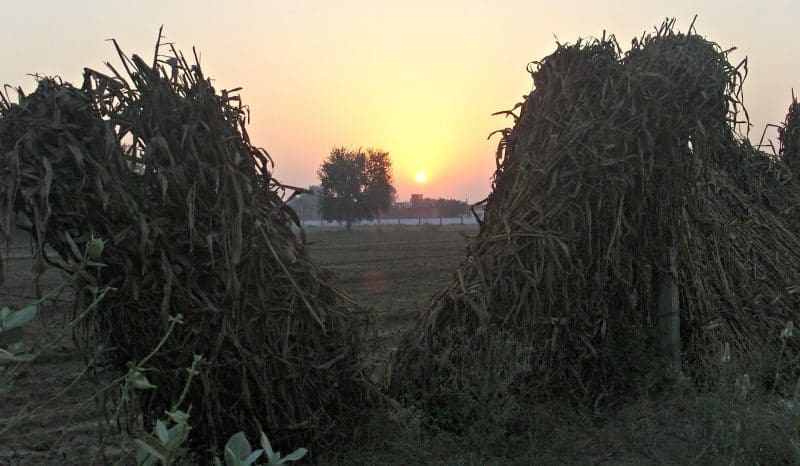 The immediate acreage surrounding Chambal is ripe for interesting jaunts.

The Blackbuck Jeep Safari scouts local antelopes. Once among them, you’ll typically encounter one dominant male reveling with up to 70 females in his harem.

Also in the mix are a few peripheral, still growing males lurking about and contemplating competing with that dominant bully. Taking in this drama made me think about childhood playground pecking orders and our inevitable freedom from it.

Roughly translated, a local farmer told me that “These antelope live in harmony with the farmlands they’ve inhabited.” In the midst of that sentence, a curious mongoose and a darting rose-ringed parakeet stole the show.

We drove on, mostly off-road, through more rural farm country until making a sunset tea stop at green farm homestead (organic is fundamental in India, they can’t afford GMO seeds or junk food) where another extended family lived side-by-side with its livestock.

Sitting with the family in the midst of their ranch, it was revealed that they’d recently fled from an urban house made of mud. When another working camel procession plodded by I realized that there’s no way for anyone to experience all of the wonders our planet has to offer. 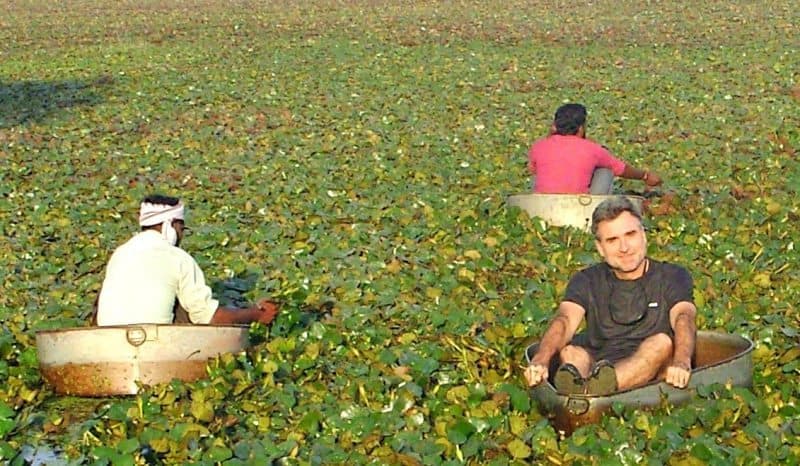 The author tries his hand as a floating farmer.

India rarely hides from itself, but the untrained eye can miss a lot. Literally, a stone’s throw from the Chambal Safari Lodge is a recently declared (by me) tourist attraction—although I’d previously passed the flowery field several times without comprehending what was really going on.

At first, I thought it was a pasture of seated farmers noodling with the soil. But they were floating farmers, each one navigating a water-chestnut harvest by hand-paddling through five feet of pond in buoyant iron washtubs. The hydroponic sailors resembled titanic wash-bucketeers hovering upon a leafy emerald dreamland.

The pilots of these agrarian tub-boats (called joria) use gentle clear-and-go paddling to not damage the brittle crop; lift plant, turn, pick, replace, paddle on. They load the chestnuts in the back of the tub until its full. I later discovered it requires a delicate balancing act to not take on water.

After taking a few pictures of these patient cultivators, I returned the next day to detect them all wearing the same outfits. I also found myself in a washtub dinghy. After taking on water and nearly capsizing, I was reminded to not be graceful like a water buffalo.

Later, back at the lodge and a bit soggy, I was happy to see these organic chestnuts on the menu.

There is further Indian way-of-life intrigue easily accessed beyond the lodge’s perimeter, including the small village of Jarar where dung-pat makers recycle cow and buffalo manure for outdoor kitchen-fire fuel.

Many people here and throughout India don’t just live side by side with their livestock, they depend on every feature of these animals. Yeah, I know, some of you also claim to cohabitate with a wild animal.

Westerners are thrilled to have the option to cook outside or take outdoor showers. India’s ubiquitous and very simple outdoor ovens and stoves are, however, often an only option to prepare family meals as well 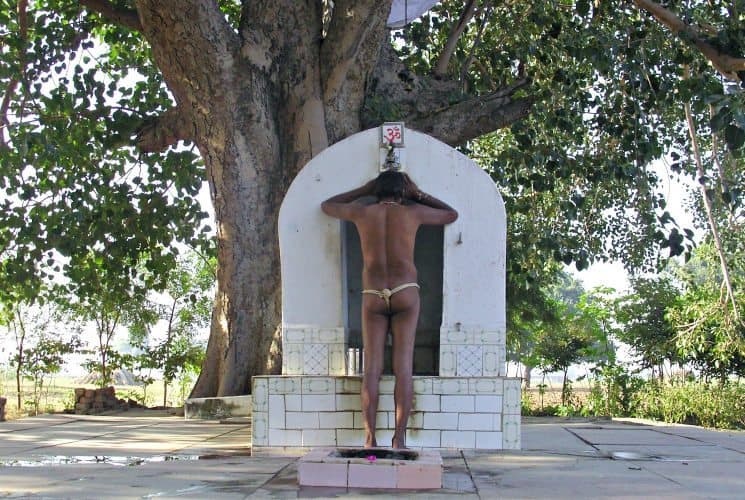 as to prepare their animal’s feed. 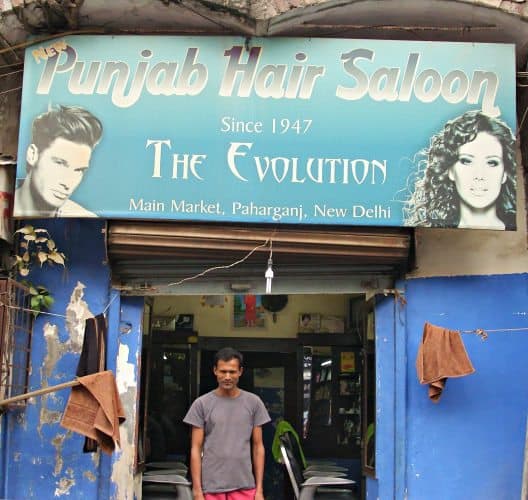 The immediate acreage surrounding Chambal is ripe for other human-interest jaunts.

Fifteen minutes by foot, I encountered a hippie-holy-man Sadhu living midway between Jarar and Narholi.

Loincloth-clad in an iangoat diaper similar to the ones worn by the spirit-driven wrestlers I met in Varanasi, this holy man counseled his local countryside folk beneath a ficus religiosa tree at the bell-topped Nagarsheli Temple.

After watching the Sadhu execute his prayer run around a routine that was centered by a ceremonial fire pit, I dug deep for a query but simply asked him about the key to happiness.

His serenely spoken, long-winded answer translated to “Listen to God, he is a good guy. Help the people, don’t hurt the people.” (30-second pause) “Throw a party.” Then, a revisit to quietude. Yes, India can also go silent.

Ps, See you next time, Mohammed…

Red Lantern Journeys is your ticket to ride the best of India—including the Chambal Safari Lodge, a calming royal campus-enclave that’s a world removed from India’s mayhem…and where Bachchu Singh the Naturalist works his magic.  The author received complimentary lodgings but the opinions are all his own.