In Cerkno, Slovenia, the Carnival of Laufarija

Judges gather for the reading of the kaloman, or indictment, of Pust. Ericka Hamburg photos.

The Run: Laufarija in Cerkno, Slovenia

Pust on trial with Flaxman and Shepherd.

With each new year, my finger skirts across the calendar, stopping just before Lent.

Carnival, “the fifth season,” marks the transition from January’s dead of winter to a flowering spring.  Though celebrated throughout the Christian world, it’s in wintry Europe where those rites, rooted in

Slovenia was next in my quest to take in carnivals around the world.

I thrust my shot glass forward for another sip of firewater; the server in white apron obliges.His mask, fixed in a benign mustachioed smile, evokes an old boyfriend.

It’s a chilly February Sunday in Cerkno, near the Julian Alps. I’ve traveled from Ljubljana, the capital, for a gathering, procession, trial, reckoning, and a good time.

The bus driver navigated numerous hairpin turns through steep forested ravines, over mountain passes, across the snow-dusted peaks, with ease. 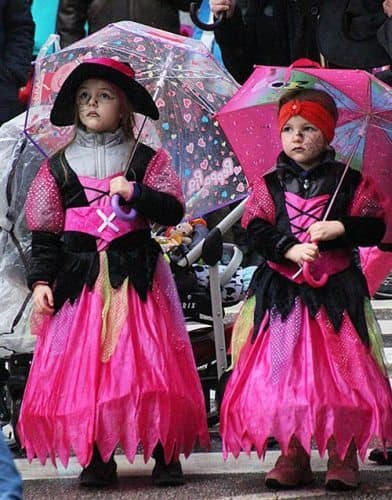 Children dressed up for the carnival in Cerkno.

Slovenia is small, but rich in Carnival festivities. My goal was to zig-zag between Ptuj, Dornava, and Cerkno, to catch a bit of each.

“Are you here to ski?” asks the woman behind the desk at the Cerkno Resort.

Swarms of boisterous teens ricochet across the lobby, chased by their parents and teachers.   Bundles of skis and poles are propped about, ready to load onto idling buses.

Not everyone is a carnival obsessive, I realized, with skiing the farthest from my mind.

“Are you an anthropologist?” she followed.

How about carnival junkie, folklore fanatic, mask freak? Yes, to all of the above.

She cracked a smile and promised to connect me with The Right People.

After settling into my room, I set out to explore the territory. 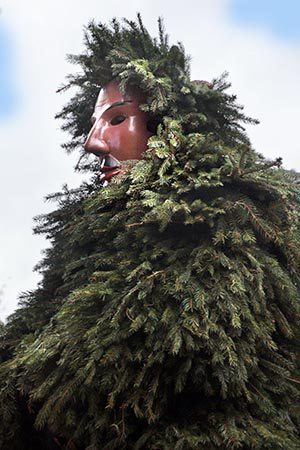 Amidst a clamor of hammering, the raised stage was taking shape in the main square.The waft of krofi, the sweet-filled donuts popular during the season, drifted by.

Bouncing in the breeze, strung from pine branches; colorful banners, and the severed feet of unlucky pigs. 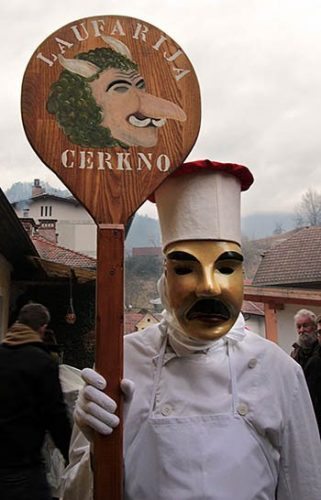 The baker plays an essential role in the carnival.

I crossed a small bridge over the bubbling Cerknica River, and found the town museum.Inside, over twenty life-size mannequins; the cast of Laufarija, return my gaze, poised to explain their purpose.

If you lived in a small alpine village hundreds of years ago, these might have been your neighbors: the innkeeper and his supply of spirits, the woodsman and his mallet, town drunkard and enabler, the proper smiling bourgeois couple, the basket man, baker, scabby guy, and more.

The Flaxman, with his goofy, somewhat sinister mask, gives Laufarija (The Run) its name, racing about, shaggy threads flying, keeping paths clear with a whip-like branch from a hazelnut tree.

Most pivotal is Pust; a horned devil with body of green moss, who carries a young spruce tree and bears the brunt all things rotten, including winter. He must be judged by a tribunal and sentenced before spring can arrive.

Starting Sundays in January, some of nature’s offerings; leaves, moss, ivy, and more, are collected for costumes. The Flaxmen (Tierjest), make the rounds, visiting homes, receiving gifts of meat and spirits.

With time, more characters appear on the streets, until the full procession and gathering for Pust’s trial. 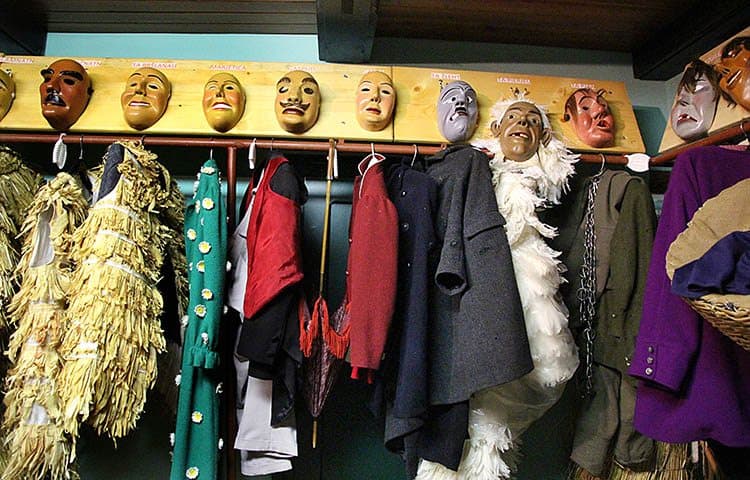 Costumes for the carnival wait in the staging room.

Its origins are murky, guessed to go back hundreds of years. But The Run came screeching to a halt in 1914, when Europe was plunged into war.

Cerkno survived bombings and Italian occupation before it was revived by countryman Peter Brelih in 1956. 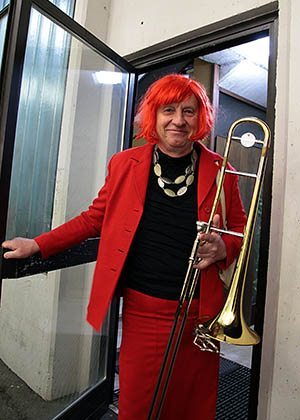 Musicians are a big part of the carnival festivities.

Working with just a few historic masks and oral histories gleaned from survivors, the old rites were revived, and even through the convulsing split of Yugoslavia, expanded.

Feeling more clued into the festivities, I left the museum and started up a trail etched into steep sloping farmland.

As I hiked uphill and away from town, wind rustled through the tall grasses, and a giant blue heron eyeballed me close by. 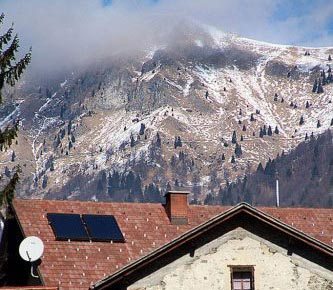 Alps displaying above the village rooftops

At an open barn, filled with dusty farm machinery and adorned with a crucifix, I turned to look down at Cerkno, diminutive as a model railroad village, framed by mountain peaks shimmering yellow in the setting sun.

With morning, the narrow streets began to fill with visitors.I’ve been connected to and meet up with Danilo; we do a short zigzag through town, carefully circumventing the boundary of St. Anne’s Church (“I don’t mix pagan and religious,” he offers) and ascend the stairs at Laufar Kamanda.

Nostalgic ephemera, including a faded portrait of Joseph Broz Tito, adorns the walls. Cerknoians, mostly young, tall and male, zip about the warren of rooms in various stages of dress.Laufarija masks hang on hooks, awaiting vivification. 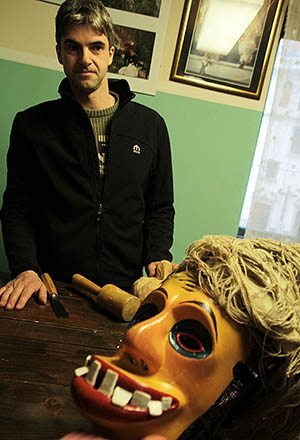 Visitors clamber up and down the stairs, a small dog holds court. Vid Prezelj, resident mask maker and keeper of a noble tradition, demonstrates how a block of linden wood is given life.

Fortunately for my wallet, masks are not for sale.

Its happy-busy; backstage before the Big Show.While Danilo deals with logistics on a two-way radio, I poke about, feeling privileged, strangely connected to this rite, glad for the moment to be out of the cold.

The Flaxmen, with new identities almost complete, check themselves in a hallway mirror before heading outside. There they’ll hunt for just the right hazelnut branch to complete their outfits.Meanwhile, he who would be Pust sits patiently as comrades layer cinch clumps of moss to his civvies, adding to his girth.

It’s time to venture down to the street, into the steady drip of rain. The main stage is hedged in by visitors, including clusters of costumed kids cuddling under umbrellas.The Innkeeper (Uastier), the doppelganger for my old boyfriend, is much in demand, filling more cups with firewater.

Now fully-armed with branch whips, the Flaxmen race to and fro, splashing through puddles, clearing a pathway for the coming procession. Soon, with the pace of a wedding party, Laufarija’s cast of characters work their way towards the stage. 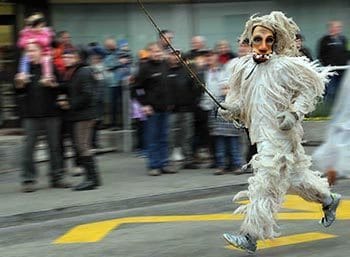 As do the tribunal of judges, carrying legal tracts, somber in their wigs, robes, and joke-store beards.

With Pust in position, the reading begins.

Poor Pust; bowed before the magistrate, weighed down by heavy wet greenery and his ceremonial tree, I feel pity.

The reading is unintelligible, not just for me, but anyone unfamiliar with this dialect; an amusing mix of Slovenian, German, and Italian, unique to Cerkno and Laufarija.

As the recitation from the kaloman, or indictment, drones on, cheers, then boos, then cheers, fly from the spectators.

On stage, the voiceless, masked players are subsumed by their roles; with gestures, struts, prancing, and pratfalls that anchor this sweet, modest pageant. 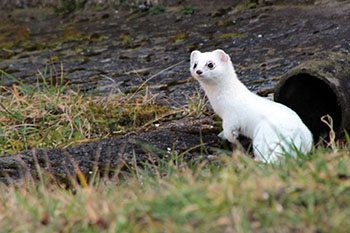 A weasel on the walking trail

After another swig from the Innkeeper, I find a spot behind the stage, half out of the rain.

Pust has been found guilty; the Flaxmen rise to surround and escort him through the crowd, off to await his execution the next day.

That night, Cerkno is humming with costume parties, bands, and food under tents. Street lights illuminate St. Anne’s Church, and the sparkly Cerknica River in its hurried path through town. Through a wintry fog, the surrounding peaks have shifted, from yellow to a deep blue.

With tomorrow, Shrove Tuesday, Pust is to be executed “by mallet”— a conk on the head from the Woodsman. With Pust and winter dispatched, Laufarijans will dance and rejoice. Since I kind of have a thing for the guy, maybe it’s just as well that I’m headed out of town.

Besides, I wouldn’t want to do anything to hold up spring. 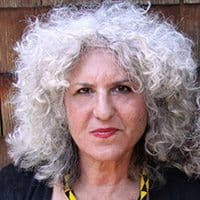 Ericka Hamburg is a photographer, writer, graphic artist, and traveler.  She is drawn to folkloric expression, wildlife at peace, and quirky museums. Her visual storytelling-has appeared in numerous magazines, newspapers, and travel blogs. For more, see erickahamburg.com