Grenada: A People to Learn From 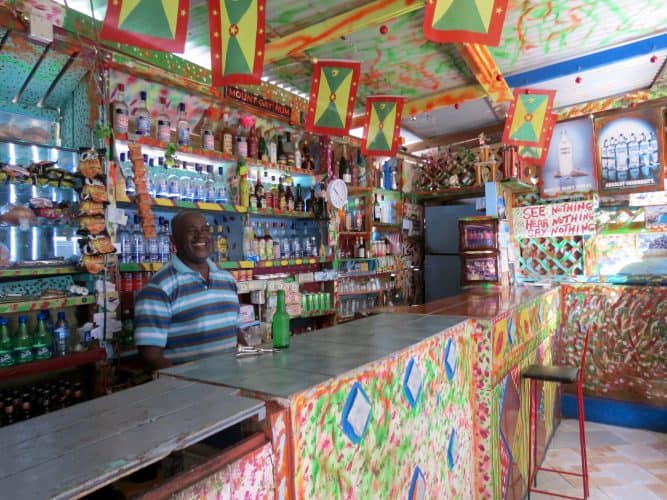 Charlie, the owner of Charlie’s Bar on Grenada, welcomed us in for some Ting and some local beers on a hot afternoon.

I went to Grenada with the expectation that I was going to write about the country’s complex history, or the Caribbean cuisine, or the dramatic and breathtaking landscapes.

Yet, as I was experiencing all of these aspects of the island, I began to realize those weren’t the features that truly made the island what it was. Rather, it was the people.

The Grenadi an people are a people full of life, and passion, and harmony. Given our current relations, both within the United States and globally, I came to find that they are a people worth learning from. 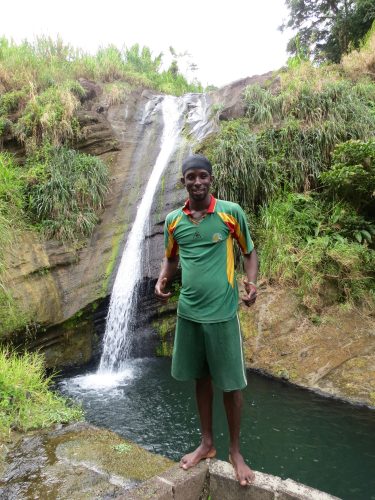 A Grenadian man showed us how we jumped from the top of Concord Falls into the water below.

I was impressed by the welcoming nature of the people from the moment I arrived at my hotel, Mt. Cinnamon, a number of villas built into the hills of the island’s southern tip overlooking the ocean.

Yet, I kept in mind that in the hospitality business, this welcoming nature is essential. What struck me more so while I spoke with the staff was not just their friendliness, but what they were actually saying.

There was a sense of pride instilled in these people that their island was something special and unique — a gift of sorts. I heard countless times talking to the staff that “it may be my first time on the island, but it certainly won’t be my last”. And I think they convinced me.

Grenada, along with its neighboring islands Trinidad & Tobago, is often referred to as “the melting pot of the Caribbean.” Influences on the architecture, the land, the cuisine, and the people can be seen coming from the French, the British Parliament, the Portuguese, the Spanish, and more recently, the Chinese. Grenada is located in the southern Caribbean Sea, a mere 200 miles north of Venezuela.

Locals and travelers alike often times refer to Grenada as “the hidden gem of the Caribbean” because “it’s just far enough South that it seems almost out of reach for travelers from North America and Europe”.  It’s also known as the spice island, as it’s a major exporter of nutmeg.

Because it’s quieter and less sought out as a resort vacation, it remains genuine and authentic to its people and their culture. As the tourism industry is beginning to grow, the Grenadian law remains in place: “you cannot build higher than the palm trees”.

Grenada’s tourism industry is now faced with the challenge of maintaining its local culture while also attracting international tourists. I found that its ability to do so was what made it such an appealing destination. 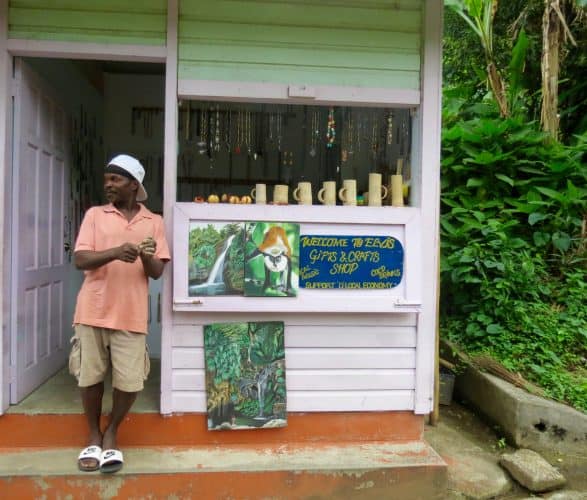 The Grenadian handmade crafts and jewelry are all made from the country’s largest export, nutmeg.

The best way to see the island is through an organized tour. The streets are winding, narrow, and difficult to drive on. There are rules of the road known only by the locals. There are no true street signs. And maps are often times not drawn to scale. Not to mention, the local tour guides are incredibly kind and can tell you the best stories about certain places around the island.

Getting to Know Our Guides

Our guide, Edwin, regardless of where we went, knew someone and had a story to tell us. He kept us entertained with his stories, his tall tales, and his recipes. We talked about fried breadfruit, the Grenadian government system, and how the locals celebrate on weekends and holidays.

Grenadian parties mean getting out on the water, on a sailboat or a motorboat, with good drinks, good food, and good company. Steamed bananas and rum are the local favorites, and they refer to their celebrations as “finding a balance” of food and drink, “so you can keep it up all day”.

The pride for his home radiated through his words. As we drove up the Grenadian hills to castles and to waterfalls, he told us Grenada is known for its “involuntary exercise, no matter where you go, there’s a hill to climb”. But there’s no other island in the Caribbean where you can go from sea level to 800 feet above sea level in less than five minutes.

During the brief rain shower we encountered, he told us “we like to call this liquid sunshine”. He laughed with the local men selling crafts and complimented the waitresses. He certainly reflected the good-humored nature of the Grenadian people. 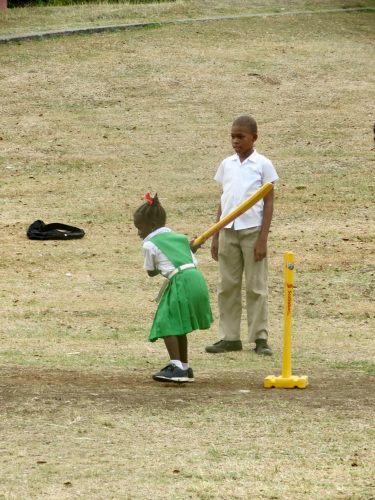 One little girl was not shy at getting up to bat on the cricket field.

At both the rum and nutmeg factories, the workers were delighted to show us around their workplaces and tell us about what they do on a daily basis.

During one of our drives, we stopped to ask a woman for a few of her chives so we could give them a taste, to which she replied “of course” and offered us more than enough. In the city center, the policemen walked around, hands in their pockets, greeting and joking with the men and women that passed by them.

There was no sense of hostility, no tension at all, and with a 98% solvency crime rate, the cops didn’t need to carry guns or wear bulletproof vests. They simply worked in harmony with the Grenadian people.

We pulled over to watch a moment of the children’s after school cricket match. We cheered on the runners and made the boys give one brave, little girl a chance at bat. Even though the cricket bat was almost the size of her body, the boys helped her swing. The smile on her face radiated as we cheered her on as we drove away. Even when I took a walk by myself l to the local grocery store, I was greeted by a hello from every passerby.

It was during these moments that I felt that I was experiencing Grenada in its truest, most genuine form. The sense of community could be felt everywhere we went. The people were pleasant, they seemed simply happy to be around each other enjoying the warmth from the sun and the community they lived in. 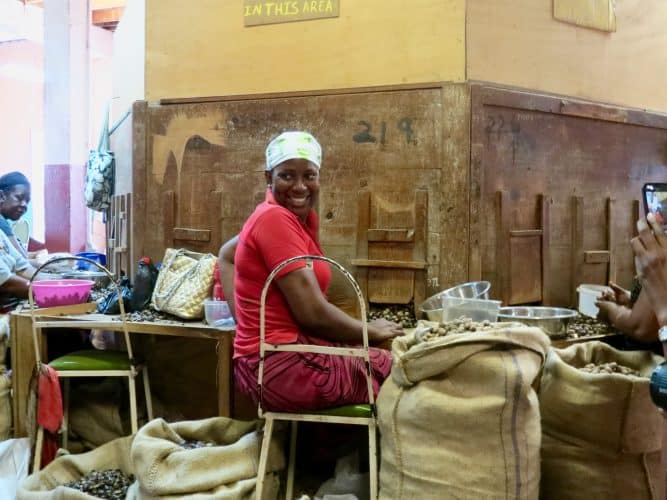 The women working in the nutmeg factory were happy to show us around and explain the process.

“The Indiana Jones of the Caribbean”

Perhaps the most interesting individual I met in Grenada, or anywhere in my travels for that matter, was Telfor, a man that the locals refer to as  “the Indiana Jones of the Caribbean”. As he led our tour through the Grand Bres plantation, he pointed out the different types of vegetation.

He cut different fruits and cocoa plants off the trees for us to try with the machete he carried in a pouch on his back.

He told us of stories of his time spent sailing around the island in his home-made boat, and how he is responsible for making the first topographical map of the island.

He knows the mountains, the rivers, and seas of the island better than the back of his hand. At 77 years old, he’s hiked over 14,000 miles and doesn’t plan to stop any time soon, before his departure, he told us he’d like to learn to kitesurf as his next hobby, and left us with his words of wisdom: “They key to living a good life is staying active”.

Of all the places I’ve been and the people I’ve met, Telfor showed the most incredible sense of passion for his life and his land. Yet, he’s just one of the many that consider Grenada a gift to the people. 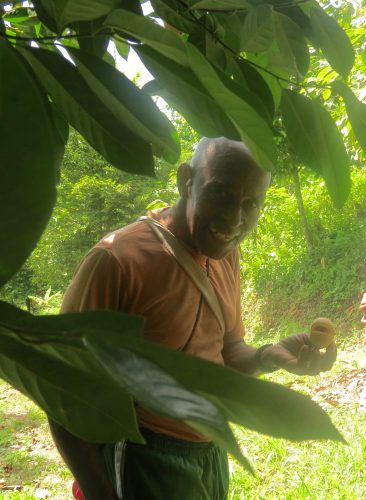 Telfor cut countless fruits and vegetables off the tree for us to try.

On my drive to the airport, as I tried to soak up the last bit of the Grenadian culture and landscape, I passed one sign that made me certain the Grenadian people and culture were what I wanted to write about in respect to the island.

The sign was not an ad for anything in particular, but rather simply a message to keep in mind, it read: “GRENADA: Enter to Learn, Go Forth to Serve”.

I think my experience in Grenada is not uncommon; the Grenadian people have a very refined understanding of community, and it’s in this quality that I think we can learn from. A trip to Grenada is bound to be refreshing — from the fruit, to the turquoise waters, to the people that call the island home.

For More Information on Visiting the Island, Check out the Pure Grenada Tourism Website

Also Check out GoNomad’s Other Articles about Grenada:

“Grenada: A Nation on the Rise”

“Grenada: An Island Redolent of Spice and History”