Ghost Towns of the West 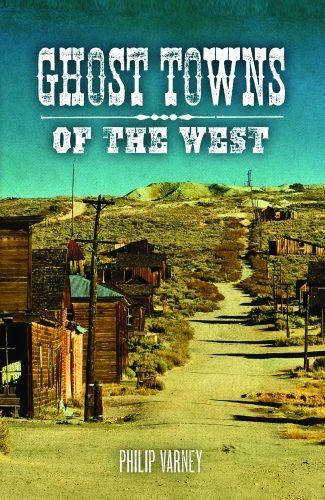 The Essential guidebook to the Glory days of the Old West

By Phillip Varney and Jim Hinckley

A cabin in the abandoned ghost town of Miner’s Delight, Wyoming.

Ghost Towns of the West blazes a trail through the dusty crossroads and mossy cemeteries of the American West, including one-time boomtowns in Arizona, California, Colorado, Idaho, Montana, Nevada, New Mexico, Oregon, Utah, Washington, and Wyoming.

The book reveals the little-known stories of long-dead soldiers, American Indians, settlers, farmers, and miners. This essential guidebook to the historic remains of centuries’ past includes maps, town histories, color and historical photographs, and detailed directions to these out-of-the-way outdoor museums of the West.

Plan your road trips by chapter–each section covers a geographic area and town entries are arranged by location to make this the most user-friendly book on ghost towns west of the Mississippi.

Ghost towns are within a short drive of major cities out West, and they make excellent day trip excursions. If you happen to be in or near Los Angeles, Phoenix, Las Vegas, or El Paso, for example, you ought to veer towards the nearest ghost town.

Western ghost towns can also easily be visited during jaunts to national parks, including Grand Canyon, Yosemite, Crater Lake, Mount Rainier, Glacier, Yellowstone, and many others throughout the West.

Ghost Towns of the West is a comprehensive guide to former boomtowns of the American West, covering ghost towns in eleven states from Washington to New Mexico, and from California to Montana. This book has everything you need to learn about, visit, and explore a modern remnant of how life used to be on the western range.

Excerpt from the Book:

The three ghost towns in this short chapter lie along a route taken by more than three hundred thousand emigrants as they traversed the Wyoming Territory on the Oregon Trail, which extended 2,000 miles from the Missouri River to Oregon City, Oregon. Southern branches of that trail led Mormons to their Zion and argonauts to their gold-filled California dreams.

Later, the Oregon Trail became the course for the transcontinental telegraph and, for the westernmost Wyoming portion of the trail, the path of the Transcontinental Rail-road—the means of transportation that made all the trails and routes obsolete.

Miner’s Delight is one of the least known, most overlooked, and most rewarding ghost towns in this book. It is an unexpected delight.

A camp called Hamilton City began with the discovery of the Miner’s Delight Mine in 1867. When that mine produced a modest bonanza of at least $60,000 in gold within two years, the camp appropriated the name of the mine. (A note about the apostrophe: The name probably should be “Miners’Delight,” as it was meant to convey “the delight of miners.”

The topographic map eliminates the apostrophe altogether, which implies the US Postal Service did the same thing much earlier. I am choosing “Miner’s” because that is the way it most commonly turns up in historic documents and current accounts.)

Miner’s Delight’s population likely never reached a hundred, peaking before 1882. The camp was deserted and in ruins in 1907, when speculators attempted to reopen the Miner’s Delight Mine. The attempt was futile; a 1914 geologist’s report noted that the mine was abandoned and flooded. During the Depression, several cabins were occupied, as in South Pass City and Atlantic City, by unemployed miners hoping to eke out a living.

To visit the townsite, you will park your car adjacent to the tiny Miner’s Delight Cemetery, with its solitary marker and three wrought-iron fences, and

Phillip Varney is the author and photographer of seven books about ghost towns. He has toured and photographed more than six hundred ghost towns throughout the American West. He lives in Tucson, Arizona. Jim Hinckley is the author of numerous critically acclaimed and best-selling books on Route 66 and has made presentations about traveling the highway internationally.

His books are provided as part of a tour package by companies based in Norway and Australia. Hinckley also regularly assists with tour development, meets with tour groups and individuals traveling Route 66, serves as a Route 66 tourism development consultant for Ramada, and is a featured speaker at the Miles of Possibilities conference that is part of the 2015 Route 66 convention.