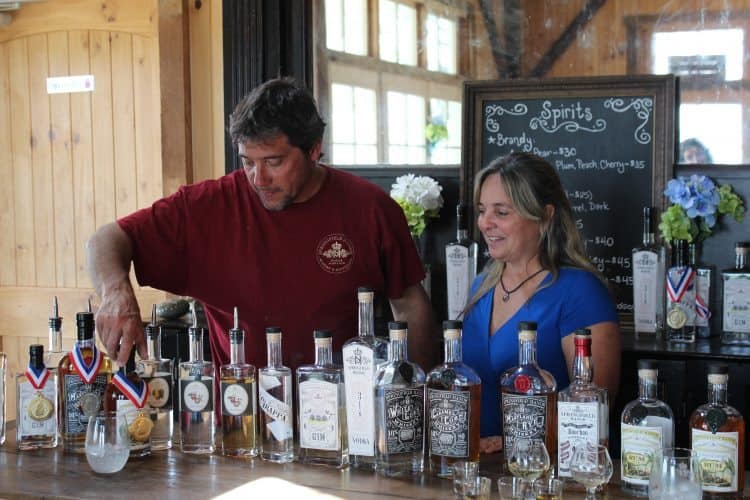 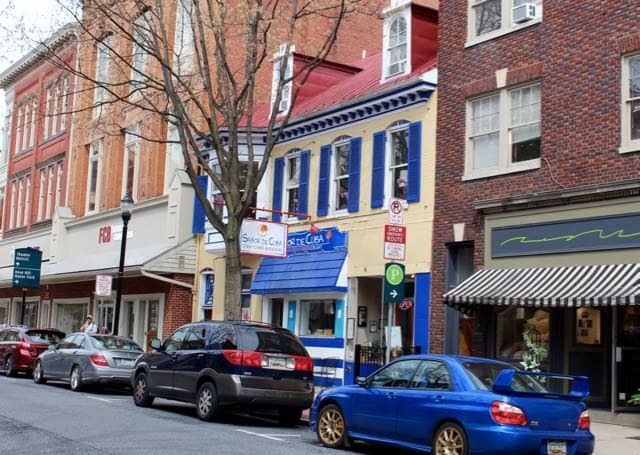 Frederick, Maryland is gifted in both beauty and history. But who knew Frederick had a deep history in distilling and bootlegging?

Over the last two years, our creative distilleries have opened their doors to the public to share this liquid history.

I had to know more about these spirits infused ventures and set out for a day of drinking, or a least responsible tasting.

Melissa Muntz from Visit Frederick kindly agreed to be my designated driver and shuttle me to all four distilleries, the Flying Dog Brewery for a beer chaser, and to Firestone Culinary Tavern for dinner and the local spirits cocktails prepared by the creative bar team.

Prior to embarking on a day of drinking, I knew a full meal deal was in order for sufficient ballast against the heavy seas ahead.

I chose Sabor de Cuba out of curiosity and was rewarded with authentic Cuban fare at this Patrick Street eatery.

Co-owner Maikael Gattorno was born in Cuba and grew up in the states after moving here at age three.

Maikael is a personable young man and waited on me as I ordered and downed the delicious Arroz con Pollo in preparation for a long day. sabordecubarestaurant.com 9 E Patrick St.

After lunch, I met Melissa and our tour started at Dragon Distillery on the east side of town. Dragon Distillery embraces Frederick’s history of bootleg moonshine. Mark T. Lambert, the owner has a family history making and running the precious liquid libation.

His relative, Bad Bill Tutt graces the label of Dragon’s Moonshine. However, this is no glamor photo; it’s a mug shot of when Bad Bill Tuft was busted for illegal bootlegging! 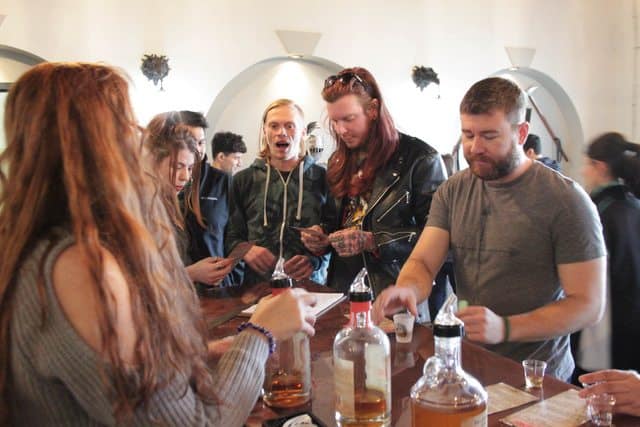 Dragon Distillery has the biggest craft still in Maryland at 528 gallons.

Mark had it custom made. He gives tours at his modern facility and tastings afterward.

If you get out of hand from too much Bad Bill Tutt moonshine, Joust gin, Cluster Spires vodka, or Medieval mint vodka, Mark has a way of dealing with such bad behavior.

In the back of the house are Dragon Distillery’s behavior modification stocks where unruly customers might get locked up to think about behaving properly. 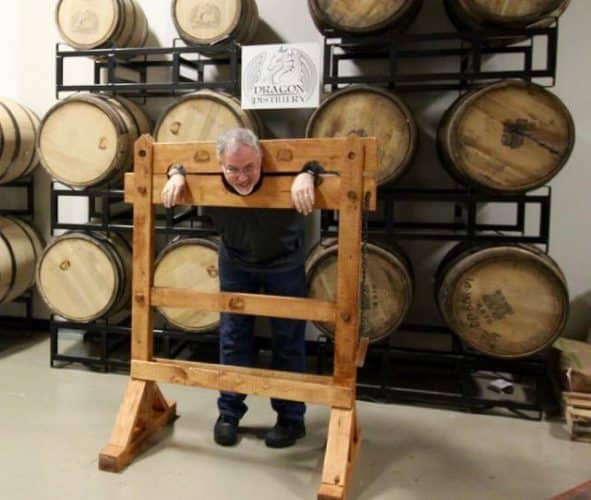 Mark was kind enough to demonstrate the process for me before I moved on to the next stop. www.dragondistillery.com 1341 Hughes Ford Rd suite 108 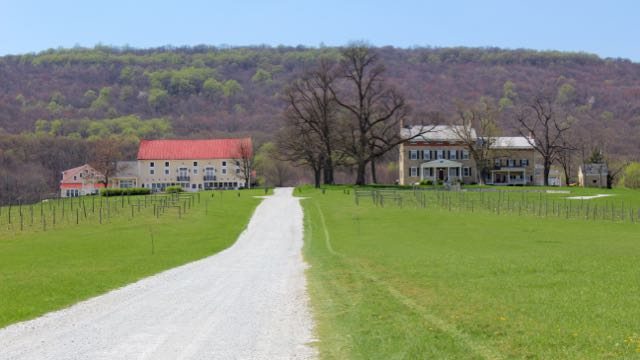 Springfield Manor sits high on a hillside north of Frederick close to Thurmont. This historic home and land once belonged to the brother, James Johnson, of Governor Thomas Johnson, appointed to the governorship by George Washington.

John and Amie St. Angelo bought the property and set about restoring the massive barn and home.

Not sure what to do with the estate when the real estate crash on 2009 changed their plans to build houses, they asked the Frederick’s Economic Development what they would recommend.

“Build a country inn or vineyard on the property.” was an answer John and Aimie had not expected.

But being savvy business minded people they pursued that course even though neither of them drink alcohol! 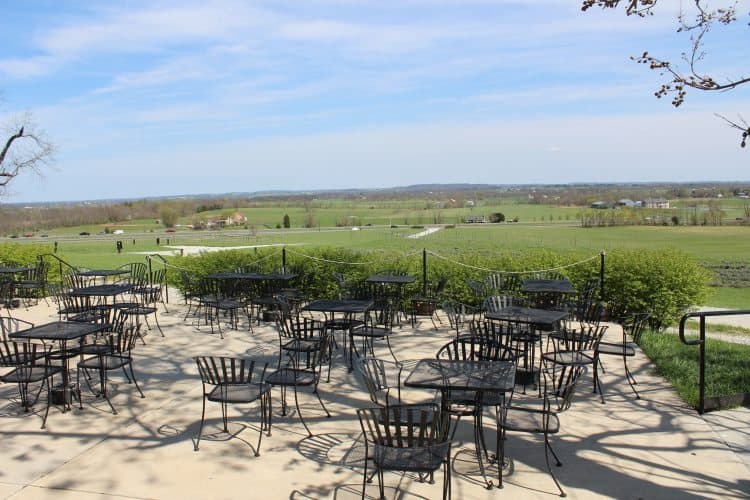 What a great idea distilling turned out to be. Their cavernous facility doubles as event space for parties, wedding, and corporate events.

The country inn has eight overnight suites, and their spirits have won medals at recent competitions.

The view is the best around and they welcome visitors to the patio overlooking the productive farmland below or for live music Fridays, Saturdays, & Sundays.  www.springfieldmanor.com 11836 Auburn rd Thurmont, MD

Back to downtown Frederick

After tasting several of their excellent spirits and brandy it was back to downtown Frederick for the last two distilleries on tour. Kyle Pfalzer and Monica Pearce founded Tenth Ward Distilling Company and opened the doors on the Fourth of July 2016 with a bang.

At Tenth Ward they embrace Frederick’s bootlegging past. I loved the way they covered a wall in the tasting room with newspaper clips of infamous bootleggers.

These news clips tell of arrests of local booze criminals from the 1920s and 1930s. Heritage Frederick helped Tenth Ward put together this wall of fame. 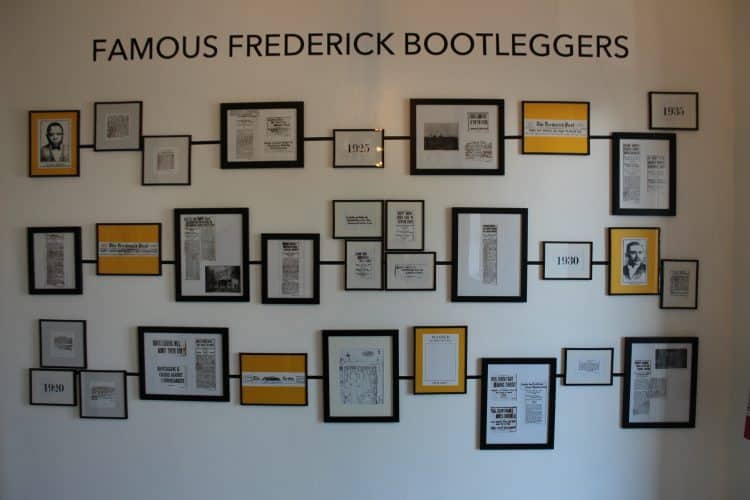 Tenth Ward sells kits for customers to take spirits home and play with flavoring whiskey with different types of wood.

They sell the wood chips and jars for home experimenting. Then they give a brief explanation of how to proceed to age spirits at home.

Playing with different lengths of time and flavors of wood, customers get to create unique home-tweaked whiskey. How fun is that! www/tenthwarddistilling.com 508 E. Church St.

One last taste of whiskey

Onward I went, a tiny bit tipsy, to the last distillery. McClintock Distilling Company was Frederick’s first legal distillery to get permitted, but the last to open. 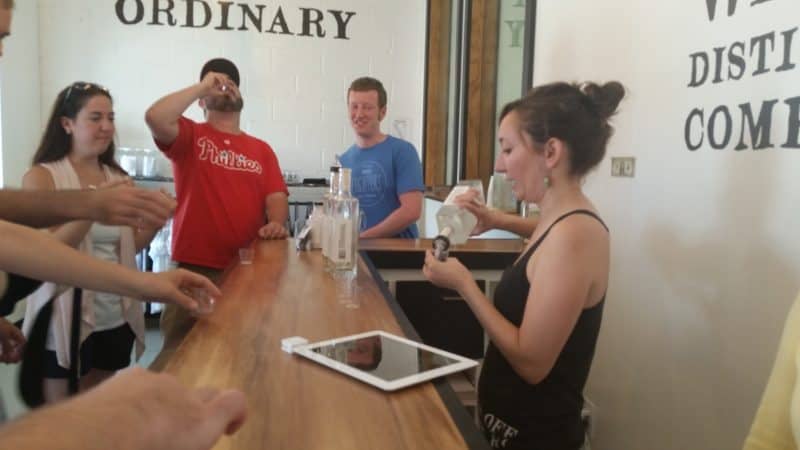 Starting a business in an old building from the 1800s has its challenges and it took two years to get all the kinks worked out of the space.

Named after the famous local McClintock Young who held numerous patents; Braeden and his partner seek to emulate the creativity of Mr. Young.

Once they did open it was full-speed ahead for Braeden and his business partner Tyler. What makes their distillery way different is they make organic spirits.

Braden showed me the massive containers of organic grain they grind in house and told me, “We send back any grain that doesn’t fit our strict quality standards and have sent back several since opening.” 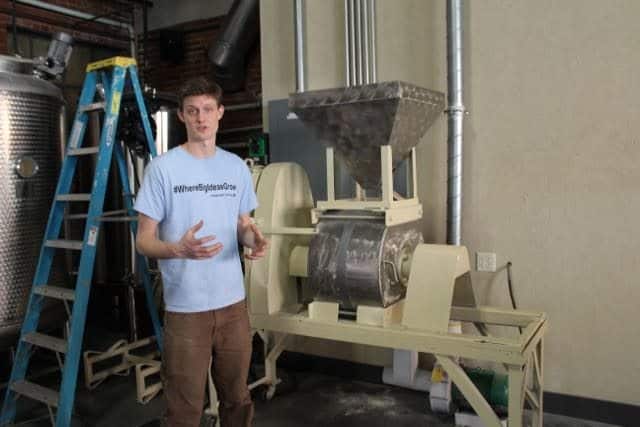 I tasted their White Whiskey, Epiphany Vodka, and Forager Gin. The gin has a list of eighteen botanicals Braeden showed me that make this unique sprit.

I confess I don’t like gin but this one was intriguing and I actually liked it. www.mcclintockdistilling.com  35 S. Carroll St

After all that drinking of spirits, it was time to head south of downtown to see the flying dog that flew in from Aspen, Colorado in 2006.

Frederick has twelve micro-breweries in and around town.  I only had time for one and had to choose carefully.

Flying Dog is one crazy cool brewery, a short distance south of downtown. The artwork alone makes their beers interesting and the names are colorful to say the least.

With monikers like Doggy Style Pale Ale, Raging Bitch Belgian IPA, and Double Dog-double IPA coming in at 11.5% alcohol, this place was perfect for ending my tour. 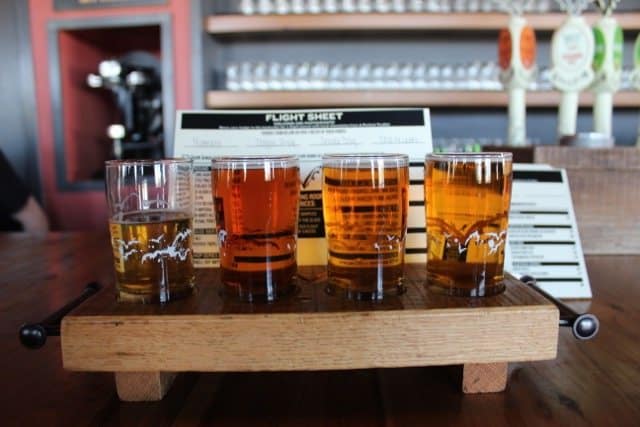 Flying in formation at Flying Dog

I ordered a flight of four beers and since I had survived the spirits tour by mostly tasting and spitting, I was primed to drink some beer.

The tasting room was only about at a quarter of capacity. Beer industry people were in the area for a special event and they made enough noise to make it seem like a packed house.

Beer industry people were in the area for a special event and they made enough noise to make it seem like a packed house.

The beer-tender waiting on me was in high sprits and donned a hard hat just in case the crowd got too rowdy. 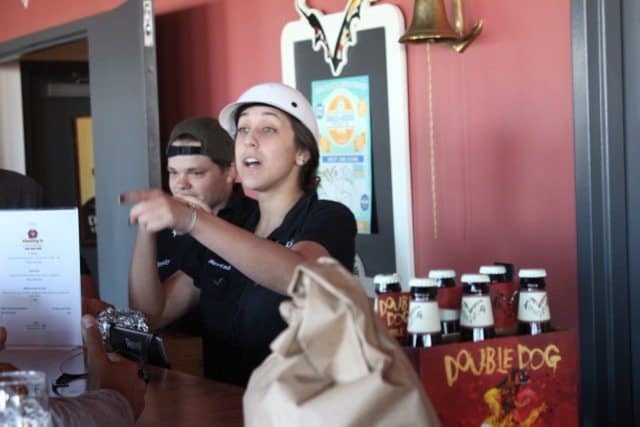 There was a food truck parked outside by the patio area in case any of the revelers got hungry.

I was surprised they didn’t serve pretzels, popcorn, or some other snack to go with the beer samples. Maybe that would make the beer tasters want to linger and overstay their welcome?

Flying Dog is open for tours and tastings. Reservations are recommended. For days and hours to plan your visit check out their website.  www.flyingdogbrewery.com 4607 Wedgewood blvd.

To end this perfect day of distillery touring my guide and I ended up in historic downtown Frederick for dinner at Firestone Culinary Tavern. The charming building was once a department store but makes a fine eating and drinking venue.

The old hardwood floors creak and groan as I walked to the staircase up to the second floor for dinner.

The dinner and service were excellent but I was surprised they were out of all the local spirits. I had hoped to sample a mixed drink or two but that will have to wait until I return. 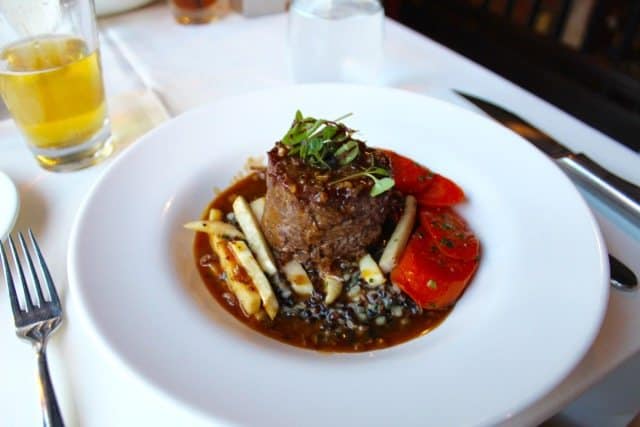 To save the day they did have several Flying Dog Brewery beers on hand and the Numero Uno agave Cerveza went well with the lamb special. firestonerestaurant.com 105 N Market St

As I pulled out of town the next day I was maybe a teensy-weensy bit hung-over from all the free drinks. The quality was far better than I expected and will return someday soon to buy a bottle or two of bourbon.

Frederick, Maryland definitely has a good thing going with four excellent distilleries in one of Maryland’s coolest towns.

When these four distilleries become famous I’ll raise a glass and say I knew them when they were just starting out.