Footsteps: Tales of Famous Writers and their Favorite Places

The old Madrid slaughterhouse, a set of neo-Mudejar style pavilions, built at the beginning of the 20th century on the banks of the Manzanares, is today a small city devoted to culture. tourism Madrid photo.

Not only does Footsteps: From Ferrante’s Naples to Hammett’s San Francisco, Literary Pilgrimages Around the World explore a variety of different lands and their histories, but it also takes the reader on a journey through the interesting lives of the famous writers of yesteryear.

While offering an alternative to travel through written accounts of cities abroad, Footsteps definitely inspires readers to explore the world much in the same way as the great writers of history. Each city explored in this masterpiece is seen in a very different way than in many other books regarding travel because of the parallel exploration of the lives of the authors that enjoyed living in these cities.

No other book can quite trace the lives of authors and the cities in which they often found themselves like Footsteps. If you’re in for a quiet evening or even enjoying a hammock in your backyard, pick up a copy of Footsteps for a distinct history lesson and some vivid descriptions of beautiful cities.

For example, instead of talking solely of a bland and boring Madrid-centered slaughterhouse, Footsteps puts the slaughterhouse in a unique context that reveals Ernest Hemingway’s frequent visitation to the establishment.

We then learn some strange facts about the slaughterhouse that attracted the famous writer to visit such a location. Hemingway’s times in Madrid are fantastically written and wonderfully portrayed in Footsteps.

“In the Legazpi neighborhood of Madrid, a vast complex of early twentieth-century buildings of ornate stone and brick sits near the banks of the Manzanares River. For most of the twentieth century, the Matadero Madrid, as the compound is known, was the city’s main slaughterhouse; its robust stench lingered far beyond the high stone walls surrounding it and deep into the working-class neighborhood nearby.

Walk the trail yourself in Madrid

In the late 1930s, though, that odor did nothing to deter a young bullfighting-obsessed American writer living in the city from frequenting the slaughterhouse.

‘This is where the old women come early in the morning to drink the supposedly nutritious blood of the freshly killed cattle,’ he later told A.E. Hotchner, his biographer. ‘Many a morning I’d get up at dawn and come down here to watch the novilleros, and sometimes even the matadors themselves, coming in to practice killing, and there would be the old women standing in line for the blood.’

These days, you won’t find the Matadors or the old women: the Matadero has been converted into a dynamic new arts center. On a recent visit, I took in an exhibition of Latin American designers–but I wasn’t really there for the art.

I was instead following the tracks of that American writer, Ernest Hemingway. Hemingway is associated with a handful of places around the planet–most notably Paris, Pamplona, Havana, Key West, and Ketchum, Idaho where he took his own life in July 1961. But none may have held a warmer spot in his heart than Madrid, which he called ‘the most Spanish of all cities,’ referring to its diverse population from every region of the country. He also titled a short story based in Madrid ‘The Capital of the World.’

‘Don Ernesto,’ as he was known to the Spanish, spent enough time in Madrid–he was there for chunks of the late 1920s, late 1930s, and parts of the 1950s, with his last visit in 1960–that he left a distinct, mostly booze-stained trail.

With the exception of the revamped Matadero, the modern version of Hemingway’s Madrid is an old-school itinerary of bars, bullfighting arenas, and restaurants. I set out to experience all that drew Hemingway back again and again to the city.

After starting my tour at the Matadero, I met up with my wife in front of our hotel, the TRYP Madrid Gran Via, one of the spots where Hemingway stayed (the second-floor breakfast room, named for the writer, displays photos of him in various acts of masculinity, like firing a gun or pulling in a huge fish from a boat).

From there we headed down the Gran Via, a wide boulevard Hemingway described as Madrid’s answer to Broadway and Fifth Avenue combined, passing by Museo Chicote, a cocktail bar he frequented in the 1930s, when it was popular with international journalists. We then zigzagged through the streets around Puerta del Sol, crossing narrow Calle Victoria, where Hemingway often purchased scalped bullfighting tickets. We walked through leafy Plaza de Santa Ana, home to Cerveceria Alemana, a 1904 beer hall that was such a favorite of Hemingway’s that he had his own table (just to the right of the entrance, the only marble-topped table overlooking a window). 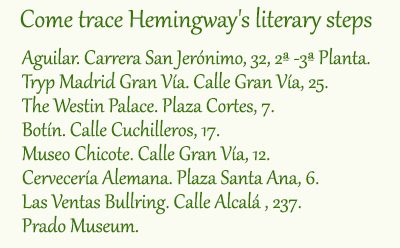 A couple of twists and turns later, we reached Calle de Echegaray, its cobblestones shining from a morning rain, and entered La Venencia, an old bar where men in flat caps and tweed jackets sipped sherry from tall, narrow glasses and barkeeps wrote their tabs in chalk on the bar.

We sat down at a table toward the back of the room with Stephen Drake-Jones, who has lived in Madrid for thirty-five years. ‘Welcome to the civil war,’ said Drake-Jones, a sixty-one-year-old former University of Madrid history professor, referring to the three-year period, 1936 to 1939, that pitted left-leaning Republicans against the Fascists. Drake-Jones runs a tour company called the Wellington Society of Madrid.

A native of Leeds, England, Drake-Jones gives a popular Hemingway-themed tour and has an encyclopedic knowledge of the writer’s time in Madrid.

As he pushed glasses of crisp Manzanilla sherry toward us, Drake-Jones explained that La Venencia was–and, in some ways, still is–a haunt for Republican sympathizers.

‘During the civil war,’ he said, ‘this bar was frequented by Republican soldiers. Hemingway would come here a lot to get news from the front-line– the late 1930s, he was reporting on the war for the North American Newspaper Alliance–which would later inform For Whom the Bell Tolls, his novel about the war.

‘This place hasn’t changed in seventy years,’ he added. ‘It’s like walking right into Hemingway.’”

David Farley is one of many authors who has contributed a fascinating story of a beloved past writer’s experiences in Footsteps. Farley, aside from his participation in Footsteps, is a recurring writer for The New York Times and Afar and he has also written a nonfiction book entitled An Irreverent Curiosity. Farley is a travel writing teacher in New York City and has been a travel writer for decades.

Buy this book on Amazon: Footsteps: From Ferrante’s Naples to Hammett’s San Francisco, Literary Pilgrimages Around the World