Eurail: Everything You Need to Know about Railpasses 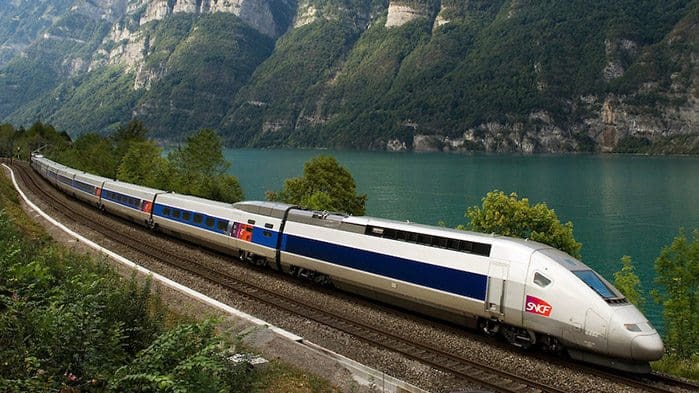 The Eurail connects 26 European railway systems, allowing travelers to get to and from country to country with ease.

A guide to buying, using and enjoying a Eurail pass to travel across Europe by Train

Eurail, formerly known as the “Eurorail”, is one of Europe’s most convenient and comfortable ways of traveling from country to country across the continent. The Eurail pass allows travelers access to an extensive and complex railway system, which accesses 26 European nations.

But don’t be fooled — Eurail is not a company itself, and it’s not a privately-operated train network. Rather, it’s a brand name that brings together the individually functioning railway networks of these 26 different European countries through the use of inclusive railway passes.

The Eurail passes grant you access to normally scheduled trains that are run by the national train operator. Because of this, the train systems in each country vary and can include high-speed, inter-city, overnight, regional, and suburban routes. The Eurail pass is the pass used by travelers visiting the European Union, citizens or residents of the European Union are required to use the Interrail Pass. 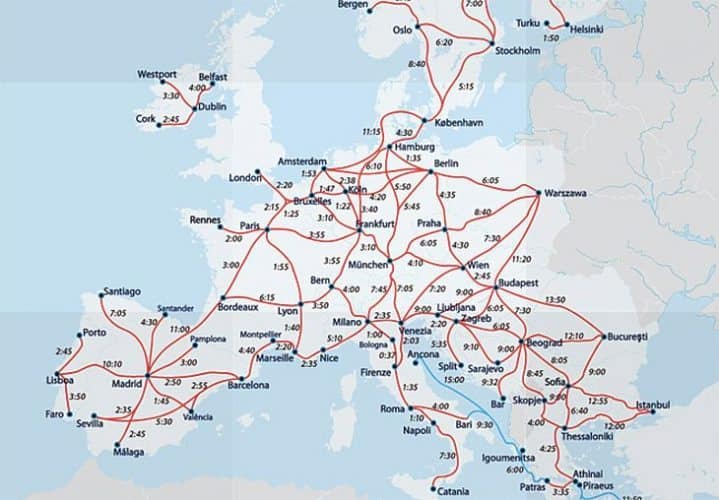 The red lines signify the routes between countries that participate in the Eurail pass.

What Makes the Eurail Experience Worth It?

There are three primary reasons the Eurail Pass is such a convenient and unique way to travel across the European mainland:

European trains link a significant number of cities and towns within each region, so traveling between destinations simply requires showing up at the train station with your pass.

Let’s face it — flying between European destinations may seem simple when you hear a “1-2 hour flight”, but that doesn’t include the extra time and cash spent getting to and from the airports and through security. Get on the train in one culture and three hours later when you step off the train, you can feel like you’re in a completely different world.

Get on the train in one culture and three hours later when you step off the train, you can feel like you’re in a completely different world.

European train travel aims to make journeys between destinations comfortable as possible for guests in their entirety. When you’re on vacation or backpacking or heading off to visit some foreign friends, knowing your travels will be relaxed and hassle-free gives you all the more reason to go.

3. The views from the window

Of course, the view from 32,000 feet is incredible but it’s pretty far down there, but so is the view when you’re tucked somewhere in the middle of the Pyrenees Mountains. Train routes cover an integral part of the European landmass. There’s a more legitimate sense of experiencing the landscape from within than from above. The picturesque routes are insurmountable and play an important role in seeing the lands that the country offers, aside from the major cities and towns.

The scenery from the train windows is unlike any other, passing through countless mountain ranges and over rivers.

One of the major conveniences that all of the Eurail passes offer is the flexibility it offers. You don’t need to specify the date you want your Eurail pass to start when purchasing it; which comes in handy for backpackers that are traveling across Europe on a loose schedule. The pass can remain unused for an 11 month period after it is purchased.

When you do decide it is time to “validate” your pass, the process to do so is simple and efficient. You bring your pass with you to any European main railway stations and have it validated by a booking clerk in the ticket office before getting on your first train.

Because of the complexity and interconnectedness of the railway system, Eurail provides several types of passes to fit the needs of different travelers. In order to assure that you choose the correct Eurail pass, there are a few questions to ask:

Who are you? The Eurail pass is offered at varying rates for different people: Adults, Youth, Child, and Saver.

Where are your travels taking you? The options for Eurail passes consist of those covering 1, 2, 3, 4, or all 26 participating countries across the system.

The Eurail Pass pictured above shows how you fill in the first and last days, as well as the travel calendar to fill in as you go.

How long are you traveling for? These different passes allow you unlimited train travel for various amounts of time. And yes — unlimited really means unlimited. You can use the pass as many times as you need during the pass’s validity.

Rail Europe offers a comprehensive and interactive website to help you decide which rail pass or a combination of passes would be best for you, depending on your travel plans. The hyperlinks for each country are included, click on your home country to be directed to the Rail Europe site:

Prices vary depending on the number of countries you wish to travel through and your age.

The average price for a single country is $150 and the prices go up from there when more countries are added on. A popular combination of 4 countries is France, Germany, Italy and Switzerland with prices starting at $309. The pass allows 10 flexible days of travel which can be used over a 2-month period. You are also allowed to take multiple trains a day, so you never have to worry about limiting yourself to only one train a day.

Another popular combination is the 2 country pass allowing you to visit France and Italy starting at $231 and includes everything the 4 country pass has to offer such as the 10 flexible days of travel.

If you plan on traveling on a high-speed train there are important reservations and additional fees that you must be aware of. Spain’s high-speed rail, AVE requires you to reserve your seat either through their reservation service online on the Eurail website or at the train station. However, there’s a possibility the train will be full during busy times, which is why it’s recommended to make reservations beforehand. 1st class seats are $25 and 2nd class seats are $10.

For France’s high-speed train, TGV seat reservations are required but the price is included in the ticket price, no additional fee is needed.

It’s important to look into the additional fees and reservation requirements as most of the high-speed trains in Europe have them. Other countries include Portugal, Belgium, Italy and Austria to name a few. Some of the lines recommend booking your seat up to 2 months in advance, although we feel that unless you are traveling during a major holiday or event it is not necessary.

None of the additional fees are over $30 and I wouldn’t worry about not being able to reserve a seat, however, these are minute details could be easily forgotten when planning your next trip to Europe. So if you plan on traveling on a high-speed train specifically, make sure to check out the individual countries rail page on Eurail.com

Traveling on an overnight train in all countries requires both making a reservation and paying an additional supplement. Supplements range between approximately $20-$60 in a 5-6 bunk compartment and between $65-$100 for a bed in a 2-bed sleeper. Overnight trains leave at 7 p.m. and are marked on your Eurail pass as running on the following day, so it only uses up one day of your rail pass. 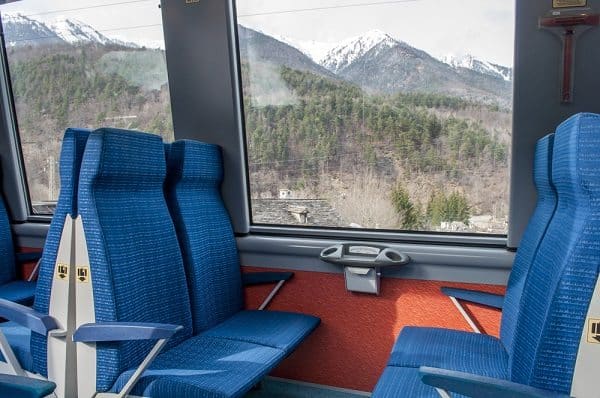 The trains are fast, modern, well-design, and air-conditioned. Budget travelers will swear by second class seats, saving their money to do other activities in Europe. Second class is certainly the norm for most travelers.

1st class Eurail passes do offer some benefits to maximize comfort. The seats are wider and plusher. There is more leg and elbow room, and fewer passengers per coach.

With fewer passengers per coach, there is more luggage room and more privacy.  Some of the railway systems offer in-seat food and drink services, but these vary between countries, and the food and drink are an extra cost as well.

The seating in the first class cabins is arranged in a way in which all seats are next to both a window and an aisle. Tables are provided as well so that a group of two or four, traveling together can sit facing each other with a table in between them.