Antigua and Barbuda: An Eco-Tour in the Land of 365 Beaches

Where’s the Lime?  I found it on Antigua!

Antigua is a sailing capital of the Caribbean, with its fine English Harbor a haven for yachts.

I was in search of some warm waters and some adventure.

I found both in abundance on Antigua and Barbuda, a small island nation in the Leeward islands near Domenica, on the near bottom of the arc of Caribbean islands

The young nation, founded in 1981, is known for having an abundance of beaches, one for every day of the year they claim.

You can have all sorts of fun on these many different beaches, from horseback riding to windsurfing, or just plain old nothing.

A rum drink is never too far away.  We met up with a rasta named Sun Fire who keeps a stable of friendly old horses by Fort Beach, and we saddled up for a twilight ride.  Magic!

I did have some trepidation about mounting a horse, with my 200+ pound weight, but the old nags seemed to take it all in stride…a walking stride.

We followed nose to tail, while Sun Fire drove ahead in a little Jeep, making sure we were on the right path following his son, Nicky.

The sun was still high in the sky, but we knew that being on the beach at the right time would be more than a great photo op.  It was bliss!

Sun Fire has a stable of horses who know the way to the beach!

About that lime.  What does it mean?  From my native hosts, I learned that people here ask, “where’s the lime” when they want to know where the party is. Where are the people who are liming?

We were enjoying some of the local cuisine at a beachside bar called Beach Limerz.  These dishes include Dukuna and Saltfish, Pepper Pot and Fungi.  We were beach liming!

Pepper Pot is the most famous; it is made of pickled beef, chicken or pork, includes potatoes and broth, and is topped with spinach and other greens.

Fungi are corn fritters, and Dukuna is made with coconut, sweet potatoes, cinnamon, and nutmeg.

Barry and Gail Edwards own the Beach Limerz, it’s truly a place worthy of its moniker–big communal tables you can sit at to eat and meet other people, and a giant wrap around bar with a great view of the beach.

Eco Adventure in the Rainforest

Dukany is a local favorite in Antigua and Barbuda, made with coconut, sweet potato and nutmeg.

After a relaxing time Beach Liming, and enjoying the local fare, it was time for a little eco-adventure, so we made our way to the island’s rainforest.

Antigua’s national park has a 13-stage zip line with eight different obstacle courses at the end.

These obstacle courses are the most fun part of the zip line, even when the staff jiggle the cable that the participants are trying to walk on!

The zip line goes through the thick rainforest, and it’s fun to bond with your fellow zippers as you go in the same order from station to station.  We got to know a pair of newlyweds from New York and another couple from Canada as we waited our turns to zip. 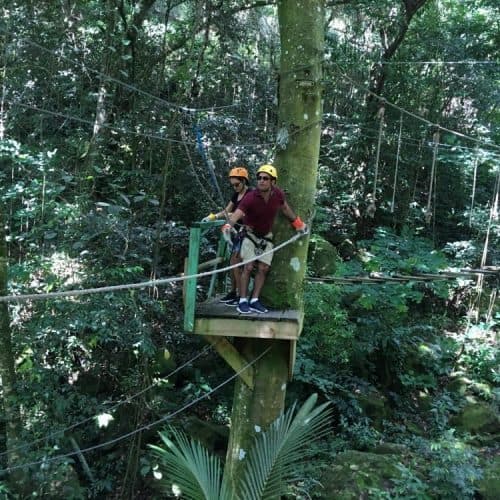 Zip lining through the rain forest in Antigua.

At the end of the zip line, the obstacles make it more of a challenge, everyone is still hooked onto the main cable so no one will perish, despite the hijinks.

South Coast Horizon Eco-Fantasies also has some fun in store for visitors who want more from their Caribbean vacation than a tan.

We joined their guide in sit-on kayaks for a short paddle through mangrove forests to a beach where we met up with a man in a boat.

The aquamarine water sprayed us as we hopped over the waves, but the warm water was welcome.  We made our way out to Cades reef just offshore and donned snorkels, masks, and fins.

There is nothing like that silence that engulfs you as you sink your head below the waves and all you have is the fish below you and no sound. It’s a magical feeling, and always worth it. 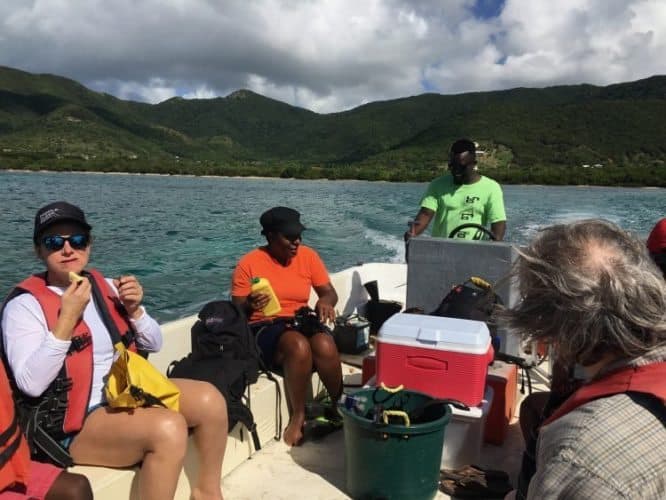 Heading out by speedboat to Cades Reef, in Antigua.

South Coast Horizon’s Eco Park offers these half-day excursions that include kayaking, reef snorkeling, snacks, and drinks.  It’s a fun diversion during a week at an all-inclusive, where many of the island’s visitors stay.

I haven’t had that many experiences at Sandal’s properties, there are 15 in all, scattered between six islands in the Caribbean.  Their resort on Antigua where we stayed is couples-only and features everything you’d expect, including the swim-up bar, a beachfront location, large rooms with full stocked bars.  And great free Wi-Fi, too.

It’s located on 27 acres on Dickenson Bay, one of the prettiest white sand beaches on the island.

When I checked to the Sandals Grande Antiqua Resort and Spa, I was told that whatever crazy amount of booze I drank, it would all be replaced in the morning. I didn’t touch a thing. 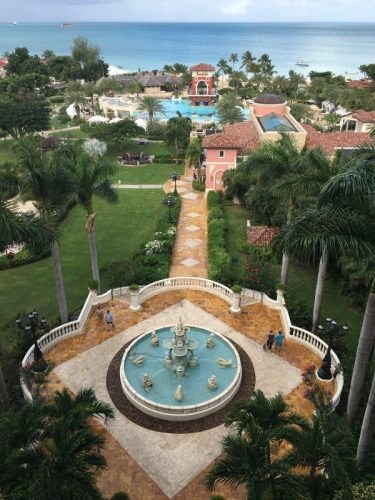 The Sandals Grande Antigua Resort and Spa is a beachfront hotel with all the amenities.

There is also a wood-fired pizza cafe, which dispenses delicious pizzas including my favorite, topped with plantains and chicken, all day and night.

The staff is uniformly friendly, the food was really tasty in Mario’s, one of 11 onsite restaurants that include a sushi bar, a high-end Japanese restaurant, a pub called the Drunken Duck and Eleanor’s, for Pan-Caribbean cuisine.

Antigua is a Sailing Capital

The island’s English Harbour is famous for Nelson’s Dockyard, where 18th and 19th-century houses and other buildings are preserved. This is a major destination for yachtsman, and the dockyard is named after the famous Vice Admiral Horatio Nelson who commanded the British Navy.

Antigua’s British roots are never far away–the island is passionate about the sport of cricket and is considered the yachting capital of the Eastern Caribbean, owing to its location and its safe harbors, English and Falmouth harbor, on the south coast of Antigua.

During Antigua Sailing Week in April, more than 100 yachts converge on English harbor for their big regatta. 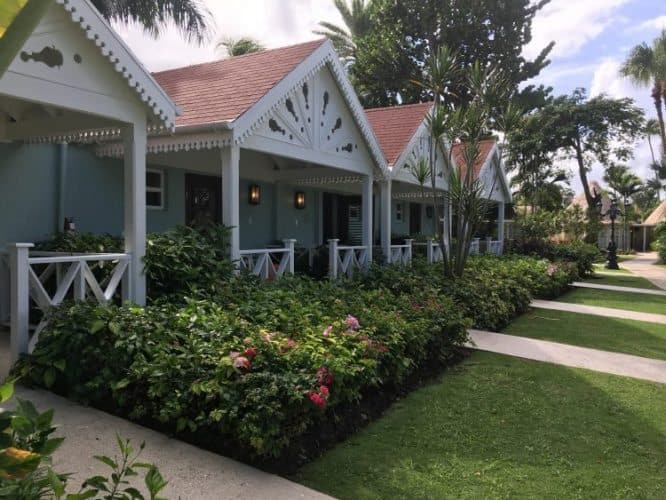 The Caribbean Grove at the Sandals Antigua.

I didn’t get to visit the country’s second island, nearby Barbuda, where I was told that actor Robert DeNiro and billionaire Aussie developer James Packer are planning a new luxury resort which will start construction in 2017.

It will be an above-water luxury resort called Paradise Found, with 50 villas. The developers will also beef up Barbuda’s small airstrip.

Barbuda has a deserted resort and only about 1500 residents compared with 80,000 on Antigua. News reports indicate that the actor is joining. They purchased 251 acres of the former K Club and will spend over $250 million developing the area

For an island that’s just 17 miles by 12, Antigua offers a traveler a wealth of fun and a guarantee of sun.