Animal Encounters Around the World 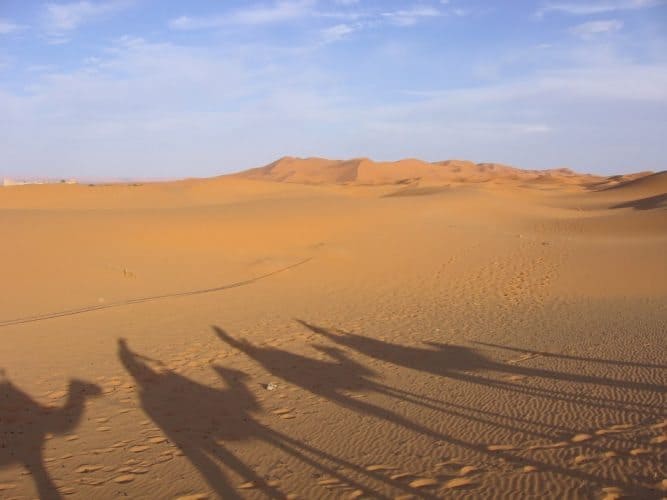 Animal Tales: Sometimes the creatures are more interesting than the people you meet! 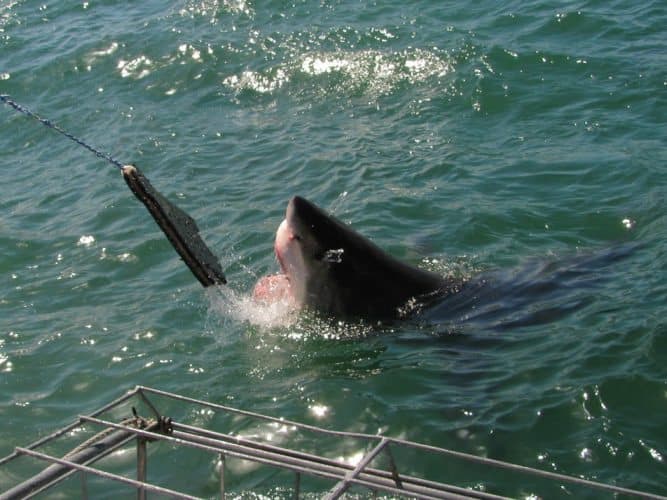 The people you meet when you travel remain a treasure long after the end of any trip.

There are so many fascinating homo sapiens on this planet that nearly every trip conjures up unique memories of our fellow humankind.  But, when I stop to reminisce about all the other species I’ve met around the world, I feel humbled by a special kind of creature kinship. It is a bond formed without shared words, a deep admiration rooted in awe, respect and just enough fear.

Even though we speak different languages, somehow I think we have understood each other.

Smokies and the Bear

Many would think it to be a disappointment to hike the Smoky Mountains and not see a black bear. Not me. I heard and smelled her instead. As I recall, it was pitch dark and I was awakened by a thud and a snort.  Now, this could have easily emanated from inside my tent, but no, the source was face to face with me, a thin Timberline tarp blinding us from each other. It was a bear. 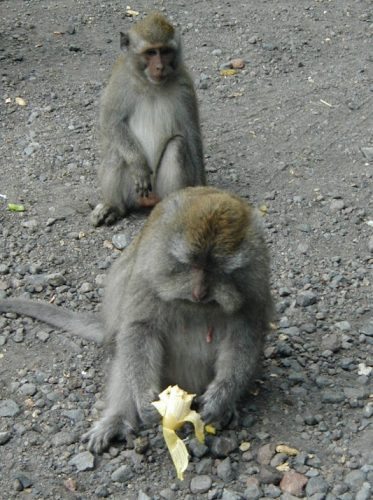 A monkey in Bali, Indonesia.

Summoning all degrees of calm and reason, I remembered my Mom always taught me to be nice, above all things, especially when someone isn’t nice to you.

I had reason to believe this bear might not have my best interests in mind, so I started thinking nice thoughts.  “You’re a pretty girl.  I sure hope you had a nice dinner of …berries or something. I hope you’re not hungry.”

Around this time, I had a terrifying brain flash, “I think I might smell like a pop-tart,” which led me down a path of when I last brushed my teeth and holy moly, the realization that my toothpaste was in my toiletry bag right at the foot of my sleeping bag.  Perfect.

Now, that bear could have used the toothpaste but I wasn’t going to volunteer it, even though I was trying to be nice. I didn’t sleep the rest of that night listening for every snapped branch in the woods. Am I ever glad I didn’t see a black bear in the Smokies.

As far as I’m concerned, elephants reign supreme as the most magnificent animals on earth. In the wild, I’ve seen elephants be playful, powerful, and nurturing. In captivity, I’ve been enchanted by the outward relationship I’ve seen with mahouts, although I’m dubious at the same time.

Thus, I was conflicted but took the opportunity to ride an elephant while in Thailand.  I remember looking into her eyes before I was seated in the howdah upon her back.  I saw her wisdom, pride, and duty.  Our trek began with a stop at the watering hole, where it was clear with one belly flop, we’d all be mud pies.

My elephant, she clearly knew this and seemed to flirt with the idea, just establishing who was really in control.  “You’re a pretty girl,” I thought, imagining the scramble to get out of that seat and considering if I really wanted to take this ride.  I didn’t, but I was committed at this point and grew uneasily accustomed to the left to right sway with each advancing step into the jungle. 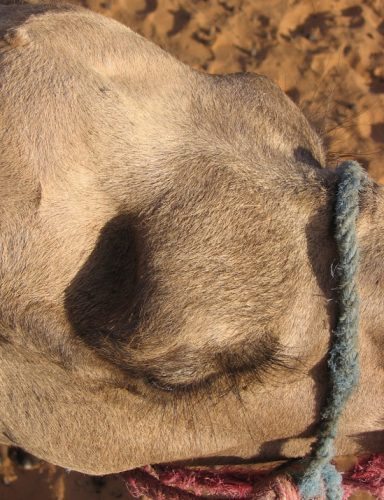 That was until this one uncertain moment when she stopped, dead in her tracks.  Her entire body began to shudder, which is a little like your own private earthquake, but the incident passed, when she passed…gas.   I have dismissed many epitaphs for my tombstone at this point in my life, but “She rode a farting elephant” is still in the running.  I loved that creature.

There is a magnificent reef off Roatan in Honduras. I’m a novice of the seas, but I’ve snorkeled enough to know, you can work a lot to see nothing. Not here. These waters are healthy, colorful and little visited but by tiny skiffs carrying the local fisherman. So, there I was, “ la-la-la,” swimming along, a mermaid in the Caribbean, when suddenly, this uneasy feeling gripped me. “Where’d all the fish go?” I questioned myself.

Then, there he was, completely motionless, sizing me up. Not a ripple of a gill or fin, no blink. The very definition of steely gaze.  It was a barracuda, my size.  “Ok sorry, you are not pretty,” I thought.   “It would be a good idea to make like those other fish and disappear.”  In all honesty, I didn’t know I was staring down the profound dental overbite of a barracuda at that moment, but I identified him in a Google Images line-up later.

If it was possible to swim backward, I did, not looking him in the eye. Happily, this story ended with all my appendages and a newly found appreciation for creatures of the sea, like starfish. 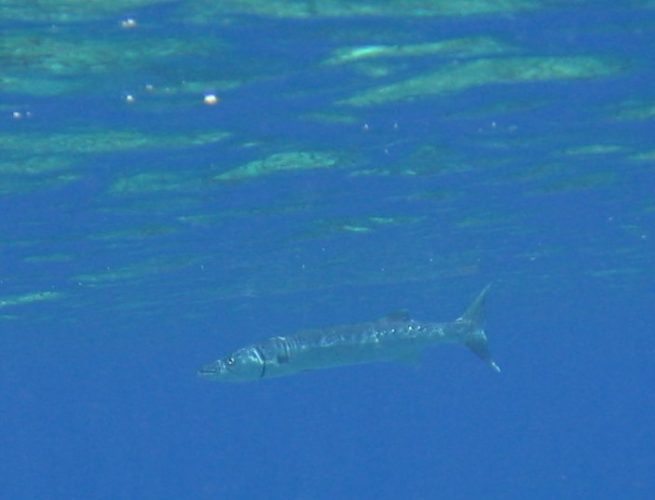 A scary barracuda in Roatan, Honduras.

I don’t like bugs. The only one I ever liked was a 1968 powder blue Volkswagen convertible. Seriously, anything with more than four legs really creeps me out. But, if there was a pageant for the world’s most alluring bugs, I suppose there are a few obvious winners.

Mr. Ant, you win the Mr. Universe title for your extraordinary strength to weight ratio.  Ms. Butterfly, you carry the most beautiful crown. But, Mr. Dung Beetle, you take the people’s favorite, Mr. Congeniality. I had the pleasure of your acquaintance at an elephant pile, north of the Crocodile River in Kruger National Park, just beyond the baobab tree.

You had a big, elephant-sized job on your hands, Mr. Dung Beetle. I was impressed with your work ethic.  Not only are you an extremely agile and skilled poop roller, but your commitment to recycling other animal’s waste is A-Number Two.

I have a bad track record with open seas, so when the captain said conditions were a bit too rough for an optimal great white shark cage-diving experience, I wanted to make like bait and press on down the Cape of Good Hope, but there were no refunds and no waiting around until tomorrow on a jam-packed agenda in South Africa.   So, I found myself in a massive pitch and roll exercise amidst blindingly crisp sunshine and gale force winds.

It was amusing for the captain to describe what we were about to experience in the cage as a “washing machine.”  Unfortunately, he was accurate and there was no gentle cycle.  Half the people were apprehensive; the other half were seasick.  “Who wants to go down first?” the captain solicited. For reasons I cannot describe, my hand shot up. So there I was in full wetsuit, bobbing in what are truly unworldly blue waters of the South Atlantic Ocean. 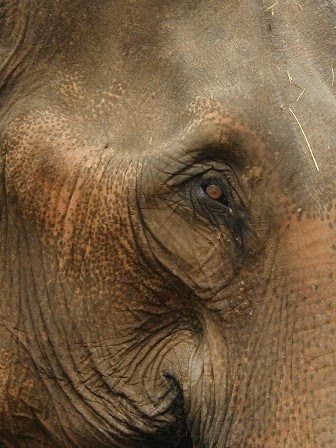 I was instructed to hold my breath and force myself down in the cage while bloody fish guts and other involuntary forms of human chum were tossed in front of the cage to lure in the great whites. It worked. They drug a Styrofoam seal decoy right in front of us as well, so the sharks would lunge at the cage. It worked. Several cycles of patrons were in and out of the washing machine, but for reasons I cannot describe, I was literally frozen in the cage.

Shivering and breathless blue, I didn’t want to miss the best sighting. With utmost respect, I have been eye ball to eye ball not more than arm’s length from the jaws of a hungry great white. Leaving me hypothermic, seasick, wind and sun burned, it was Jaws’ revenge. I hope they had a nice snack. I’m glad it wasn’t me.

A camel in kind

Camels can be obstinate. We had just caravanned for hours into the Sahara desert and it was time for a rest. For me, that meant I was buried up to my knees in fine, warm particles of sand, delightfully refreshing as the sun set and the desert chill rolled in. I was watching my camel.  She looked pissed off, also hunkered down in the sand, ruminating on whether she really intended to carry my sore  arse back to our camp. When it was time to go, she wouldn’t get up.  I said aloud, “You’re a pretty gi….hummm.

You have lovely eyelashes.” I was trying to invoke my Mom’s advice, but I found myself thinking like a man trying to talk to a seething woman.  “Please, dear Lord, don’t let me say the wrong thing,” I thought.  Other camels were beginning a laborious maneuver to their feet.

Not mine. It was fruitless. It was her will and there was nothing I could do about it. I got the irony; it was time for me to taste a bit of my own feminine medicine. It is true that patience is a man’s greatest virtue. I gave her all the time she needed. As for me and my camel, we exchanged gratitudes back at camp and parted the best of girlfriends. I even invited her to go shoe shopping later. She’s got great toes. 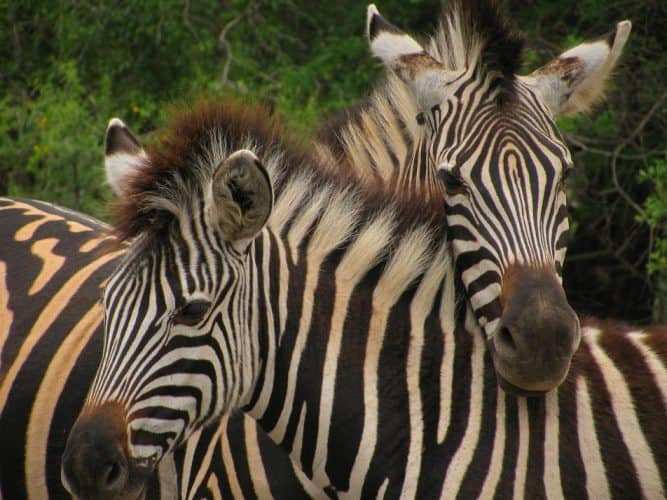 There’s a hot little commodities market thriving in the south of Bali.  These young entrepreneurs were an inspiration to watch: creative, productive, profitable and hairy.  The sign did say, “Beware of the monkeys. Secure loose items. Do not leave items unattended,” and if you didn’t heed this advice, soon you’d find your item up for bid.

On the trading room floor, you were likely to see sunglasses, cameras, purses. As Presiding Monkey examined a set of binoculars, you could almost hear him say, “Nice set of Bushnells.  I’ll take a banana for these binocs. Offers anyone?”  Of course, I was finding this immensely amusing until I nearly became an unwitting investor.

To this day, I have no idea how he arrived, but suddenly there was a monkey on my back. He wanted my prescription Ray-Bans which incidentally were still attached to my face. Little monkey fingers grabbing at my temples has become the stuff of nightmares. I screamed I swatted, I ran.

How convenient I could “tip” a local “guide” to bribe the monkey with peanuts to get my glasses back. This Monkey Business, it’s dirty business.

In Black and White

Marloth is like a self-catering safari where you can drive the winding dirt paths among countless warthogs, kudu, springbok, zebras and the occasional giraffes.  Even though uninvited, it really wasn’t a surprise to have a dazzle of zebras show up for a bush fire one crisp summer evening in Marloth.

The zebras seemed social, eager to join our private happy hour. They were polite guests, not eating anything and they even posed with me for a few photos. There was this one dude though…it wasn’t hard to notice… Ummm, I think he liked me.  He wasn’t invited to spend the night, but he was pitching a tent anyway.  I know what he was thinking–“You’re a pretty girl.”

Lori Veale Cheney is a retired banker who has traveled extensively on six continents. (Still dreaming of Antarctica!)