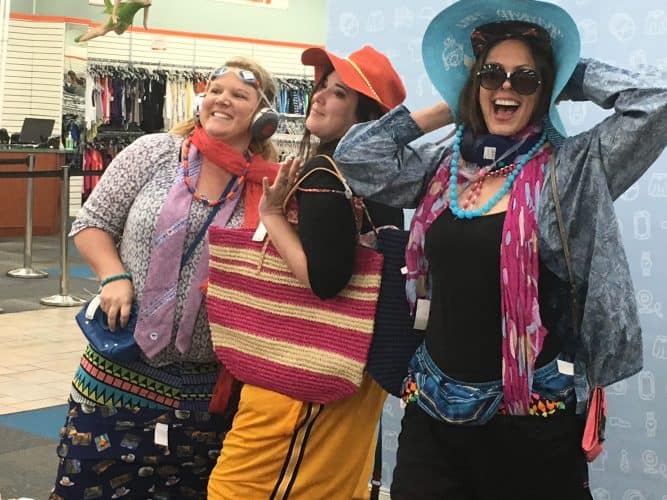 How many clothing items can you put on on in one minute? Find out at the Unclaimed Baggage Center in Scottsboro, Alabama. Max Hartshorne photos.

Alabama – The Hub of Left Behind Goods

Traveling in itself is stressful enough, not to mention worrying that the precious valuables jampacked into your luggage might become lost, stolen, or end up in a different country altogether. 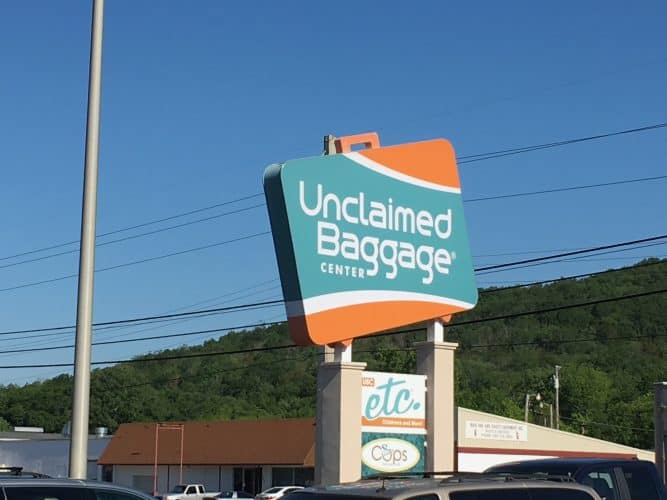 This is where your luggage is after you’ve lost it on an airplane, a bus or a train.

There is nothing more frustrating than waiting at the baggage claim, seeing the same suitcase roll around the conveyor belt four times, only to find out you are the unlucky one whose luggage got lost along the way.

Most likely, one day will turn into a few days and your luggage will be returned to you safely, however, do you ever wonder where the luggage that is never claimed goes?

No, it’s not a free-for-all for all the airport employees. In actuality, the Unclaimed Baggage Center in Scottsboro, Alabama has the job of purchasing unidentified luggage and either selling, donating, or tossing the items in the trash.

How it all Started

The famous store was established in 1970 shortly after Doyle Owens borrowed $300, the journey to Washington DC, and purchased his first bundle of unclaimed baggage from Trailway bus lines. After expanding their business with airline merchandise, the Owens family purchased the Unclaimed Baggage Center in 1995, creating what is now the unique retail store located on West Willow St.

Picture a giant souvenir shop filled with the most random array of clothing, electronics, and tacky beach shirts, if you can picture this, you probably can gain an insight into what the baggage center looks like.

The baggage center doubles as a retail shop that offers left behind goods at bargain prices. If you’re a bargain shopper, then 20-80% off retail most likely sounds like a fairly solid deal.

All lost baggage are picked up by the truckloads and are bought unseen by the Unclaimed Baggage Center. Of course, not all items are deemed worthy enough to be sold. After a complicated sorting process, profitable clothing is then sent to the largest in-house laundry/dry cleaning facility in Northern Alabama. As far as electronics, personal information is deleted and the gadgets are tested and prepped for sale.

With 40,000 square feet of space, employees work to refurbish and organize the unclaimed items. Over 7,000 unclaimed treasures enter the doors of the Unclaimed Baggage Center each and every day, there’s no surprise that shoppers from all over the world make it a priority to visit.

The Unclaimed Baggage Center prides itself on the philosophy of giving back. The center works with charity partners locally, regionally, and internationally to donate millions of dollars worth of unsellable clothing and equipment to hundreds of thousands of needy people. The center works to reclaim otherwise unsellable items, such as eyeglasses and wheelchairs, which are often rebuilt for handicapped children.

Millions of dollars worth of medical supplies and clothing have been donated to developing countries to charities like the Salvation Army and Lions Club. So, if you happen to lose track of your luggage and never see it again, don’t sweat it, your stuff might actually be helping someone else in need. At least that’s one way to think of it! 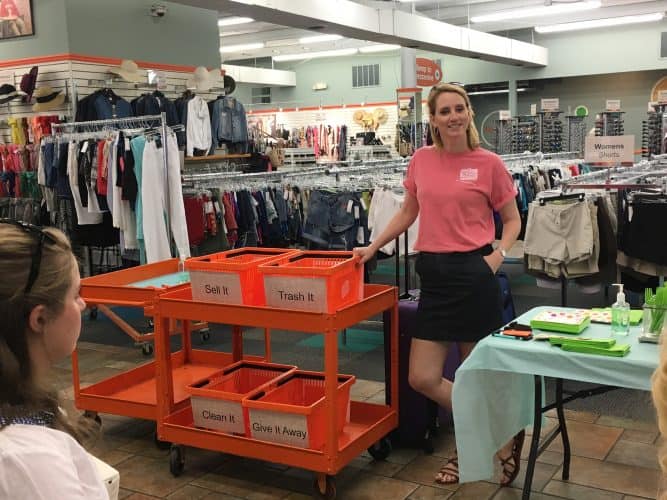 Most of the luggage that makes its way to the center is mostly trash, exclaimed Brenda Cantrell, The Brand Ambassador. Brenda, who began working at the center shortly after college, helps assist the charitable efforts of the Unclaimed Baggage Center, such as donating supplies and goods to local charities.

Naturally, many of the items that make it through the sorting process are just too wacky and marvelous to sell, these special items are featured on rotating displays in Unclaimed Baggage Center’s museum and shown off throughout the store. The most absurd items discovered include moose antlers, a live rattlesnake, and 50 vacuum-packed frogs.

We all tend to overpack, especially when it comes to clothing, therefore it is not unusual for the Unclaimed Baggage Center to come across some pretty flashy outfits. If you’re wondering exactly what outfits are left behind, let’s just say there is one less woman without her show girl costume in Las Vegas.

If you find yourself wanting to switch up your wardrobe, maybe add a little spunk, I doubt you’ll find any other retail store with a full Scottish kilt or an aluminized fire suit.

A couple national treasure have made their way to the Unclaimed Baggage Center, including a camera from a space shuttle and a missile guidance system for a fighter jet. Both items were promptly returned to NASA and the Air Force. But it does make you wonder who freely travels with objects from outer space. 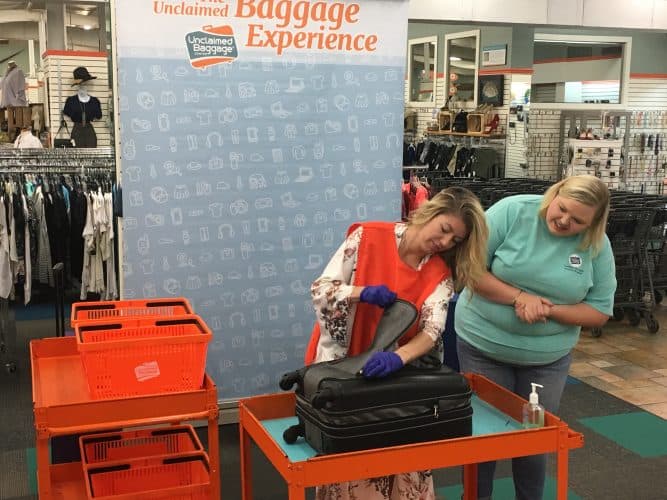 An employee shows a guest how to go through a suitcase to find everything that may be hidden inside. Sometimes that includes cash.

From shoes to sporting goods, to fine jewelry and computers, there is no telling what kind of unusual items will appear at the Unclaimed Baggage Center on a daily basis.

Airline companies invest a significant amount of time and technological resources into recovering lost or damaged baggage. With an industry-wide computer system used by over 300 carries, airlines electronically trace luggage and will also perform visual searches.

If all else fails, a more rigorous search is administered where a detailed list is provided for each item within the lost baggage. This process can take up to three months, or more. Complex computer systems are used throughout the process to match lost bags to their owners. If all options are exhausted and the baggage cannot be returned, a claim is then paid to the customer.

Bags can be separated from their owner’s several reasons, people are quick to put the blame the airlines, but that’s not always the case. Poor weather, luggage without tags, and items left behind are a few typical ways in which baggage becomes lost.

No Profit for Airlines

Contrary to popular belief, it is not in the airports best interest to acquire unclaimed baggage, as they do not make any substantial profits from them. The immense amount of energy that goes into tracing the owners down overwhelms the smaller profit that is gained from selling the unmatched baggage.

If you happen to find yourself traveling through the great state of Alabama, schedule a day to stop by the Unclaimed Baggage Center. With over a million visitors each year, and a top tourist attraction, this rare retail store is surely worth a visit. The hidden treasures you’ll find won’t disappoint, at least they didn’t for us!